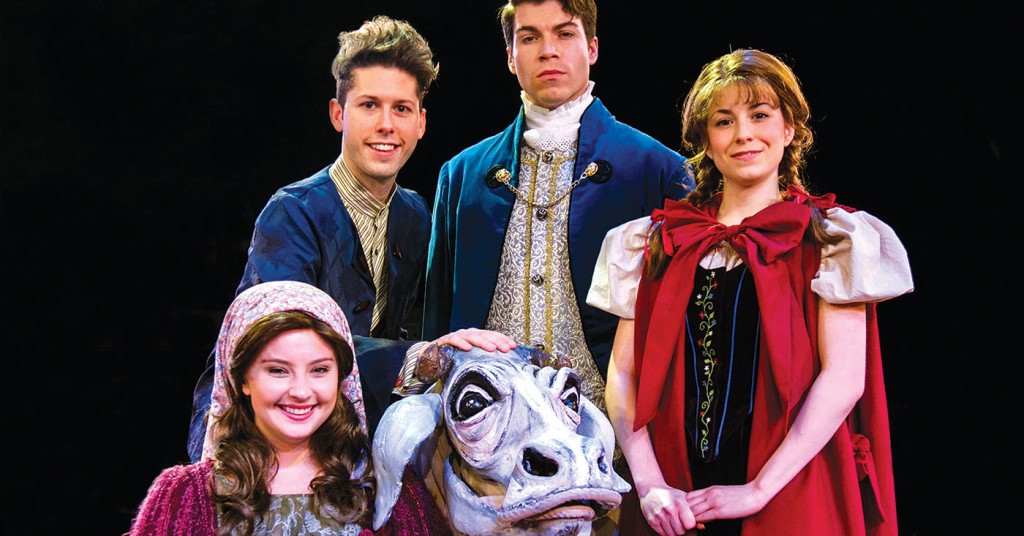 The musical “Into the Woods” opens with magic words: “Once upon a time…” And immediately it plunges us into a world populated by the likes of Cinderella, Rapunzel, Little Red Riding Hood, Jack (and his beloved Milky White cow), Snow White, a Baker and his Wife. It’s a world of handsome princes, fearsome giants (and giantesses). It’s a world of magic beans and Sleeping Beauties, wolves and witches.

And like the source fairy tales around which its built, “Into the Woods,” by Stephen Sondheim (music and lyics) and James Lapine (book) plumbs universal dreams and nightmares, fears and aspirations. And it does that in the context of a musical score that’s just as intricate, detailed and psychologically rich as the exquisite web of stories it weaves together. It’s a score that one moment can soar with romantic lyricism — then turn around and pulse with the street-infused rhythms of hip-hop.

In short, “Into the Woods” is a complex masterpiece and a challenging work to stage.

Derby Dinner Playhouse more than meets the challenge in its production, which opened last week under the direction of Lee Buckholz. This is a bracing, no-holds-barred staging, with great voices, a fearless musical pace (thanks to an excellent live ensemble led by Scott Bradley and wonderful choreography from Heather Page Folsom) and fine production values (costumes, Sharon Murray Harrah; scenic design, Ron Riall; lights, Andrew Duff; sound, David Nelson). Since the cast numbers more than 20, it’s impossible to list all of the performers (though the acting and singing are top notch from start to finish.  Special notice goes to Sara King, the formidable Witch whose machinations drive much of the action, and to the Jim Hesselman as the calm, tweedy Narrator whose commentary serves as a counterbalance to the often frenetic action. But it’s the folks who go into the woods — some wicked, some innocent, but all pursuing a dream — whose stories amuse us, disturb us and stir our emotions: the Baker (Matthew Brennan) and his Wife (Jillian Prefach), whose quest is to break a spell that keeps them from having a child; Cinderella (Brook Bauerfeld), whose dream is to attend a festival at court and meet a Prince (played Billy Casey, who doubles as the sinister Wolf with designs on Little Red Riding Hood, played by Kaylee Annable); Jack (Michael Luongo), the hapless youth whose mother (Elizabeth Loos) sends him to town to turn a Milky White cow (Lem Jackson in a physically demanding role) into cash, but instead winds up with a handful of beans — and eventually earns the enmity of a great giant and his wife.

Theatergoers have three opportunities to see plays by Sarah Ruhl this month. Liminal Playhouse (theliminalplayhouse.org) opens “Melancholy Play: A Contemporary Farce” March 24; ATL opens “For Peter Pan on her 70th Birthday” March 8; and Looking for Lilith’s “Orlando” runs through March 5 at Bellarmine (lookingforlilith.org; 638-2559). The tone and rhythm of “Orlando”are unrelentingly declamatory, which robs the production of nuance, and interferes with the comic timing the play needs. Still, it’s a visually arresting production thanks to well-sculpted choreography, and it is a disciplined take on an ingenious script.