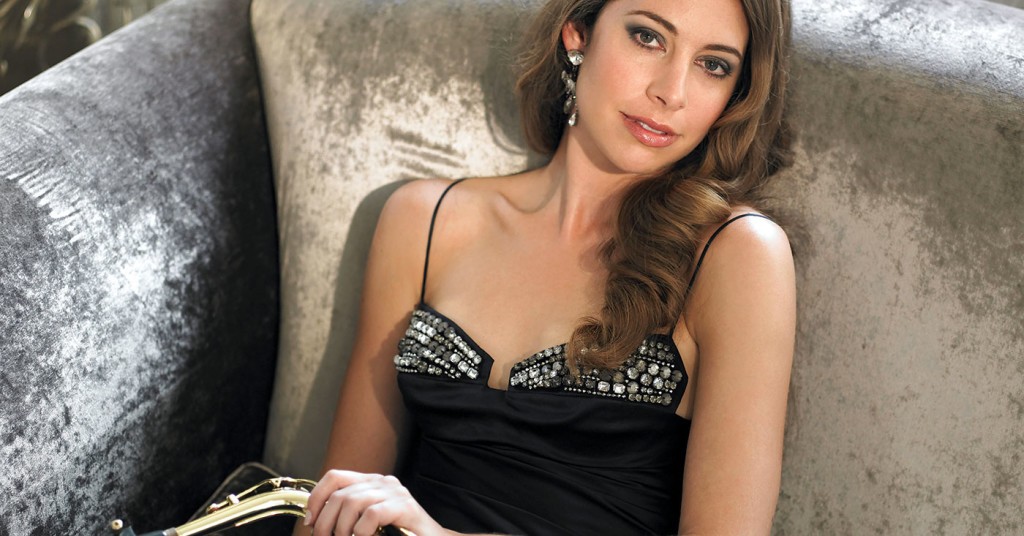 A soloist taking up a classical composition is always allowed a little latitude in interpretation. But not a lot. If it’s a concerto by, say, Mozart or Mendelssohn, from two centuries ago, the parameters of performance are pretty well set.

But Amy Dickson likes to get a little closer to her sources, working with contemporary composers for fresh interpretations of freshly created music. “When I was at music college in London and Amsterdam I made friends with composers,” Dickson explains. “As I became more of a soloist I began to perform and record their new pieces, And if I had an opportunity to be involved with one of my A-list composers I grabbed the chance.”

Which is how Dickson came to make Philip Glass’ violin concerto a staple of her concert repertoire. She asked Glass for his blessing — and got it. This weekend, Dickson will perform the work here as part of the “Spring Collaboration” of the Louisville Orchestra and Louisville Ballet. Also on the bill is a new composition by Teddy Abrams called “Unified Field” and a production of Igor Stavinsky’s big ballet “Petrushka” — which promises to spill all over and off the Whitney Hall stage.

Today Dickson, a native of Sydney, Australia, who lives in London, enjoys special international note for her performances of the Glass violin concerto. The only thing is — she’s not a violinist. Her instrument is saxophone.

Saxophones, of course, are not often associated with classical music. The family of reed instruments, ranging from bass to soprano in voice, was invented by Adolfe Sax in 1846 to take a place between delicate woodwinds and blaring brass in the orchestra. But it was marching bands that first latched on to the big sax sounds. Then the Big Bands of the Swing Era placed a whole section of saxophones at the center of the dance music. Later still, saxes wailed and honky-tonked in R&B bands of the 1950s and ’60s.

But you won’t find much “Yakety Sax” in Dickson’s sound. Her notes are melodic and haunting — as echoed in Adam Hougland’s choreography for the piece, called “Cold Virtues.”“The thing with the saxophone is everyone sounds completely different,” says Dickson, who will perform the Glass piece on a soprano saxophone. “There is such a wide variety of possible sounds. If you’re used to a jazzy sound, I’m going to be quite different.”

And definitely a pioneer — starting with those A-list contemporary composers. “They’ll write something and then bring it to me. We’ll have a coffee and then I’ll play it for them. Very few composers actually play the saxophone, so its slightly a learning process for them — working out what they are able to ask a saxophone player to do.”

Glass asked what a violin is able to do. Now Dickson answers with what a saxaphonist can do with a difficult violin piece.

“I came across the piece when I was visiting a friend once,” says Dickson. “He played the piece and I fell in love with it, instantly. He asked, ‘Could you play that on a saxophone?’ I said, ‘Oh, no, don’t be silly. It’s too hard. There are too many notes and nowhere to breathe.’”

But she liked the idea. “I went home and I was just really obsessed with it. Something about it touched my heart.”

Dickson spent the next six months practicing the piece, especially working out a way to breathe in what amounts to a continuous roll out of notes.

“I sent my arrangement to Philip Glass, and he approved it,” says Dickson. “Then we recorded it with the Royal Philharmonic, here in London.

“It’s kind of been my baby ever since,” Dickson adds. “I’ve played it all over the world and still really, really love it.”

“We were just talking,” says Curran. “It was inevitable we going to collaborate. The two of us (both came) into this community with that in mind: to take any chance to do something new, or try something different, or get into a space or place where we haven’t been before.”

The big number of the show is Stavinsky’s “Petruska,” which, Abrams says, gives the ballet and orchestra a chance to think big.

“Stravinsky’s most famous works were ballets, yet they are very rarely performed as ballets,” says Abrams. “They’re almost always performed as orchestral suites. Usually it is because the pieces are just too big. They’re too big of a conception. The challenges of doing them orchestrally and dramatically are really big, and vast. But the idea here is, since we’re actually collaborating (ITAL), we can think really big.”

An interesting conversation. A listener can hear the two directors just about bubbling with their “Spring Collaboration.” Kind of like a Judy Garland/Mickey Rooney movie where they’d get all the kids together and say, “Let’s put on a show!” •