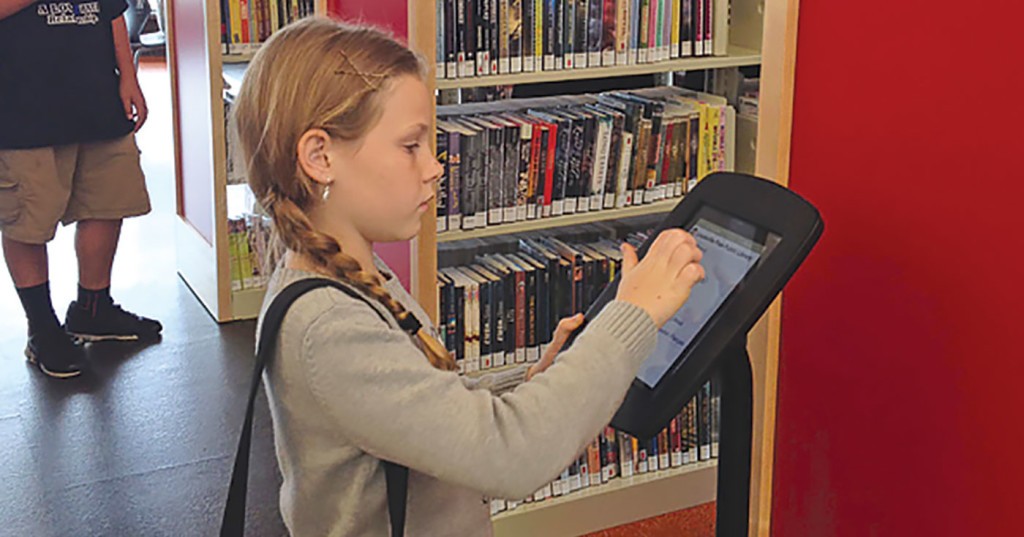 For decades, libraries were simply repositories for books — a place where knowledge was stored by ink and paper, and if you wanted to learn about a subject you had to scour the stacks of books to find exactly what you were looking for.

Today, the Internet is that place (or at least some of it is), where people go to learn about almost anything. The human experience, and nearly everything we have learned in our centuries of existence, has been digitized and is easily accessed by the smartphone in your pocket.

Yet we still have libraries, quite a few actually, so how are they surviving in this digital age? They evolved.

“You have to adapt or die,” said Courtney Block, Instruction, Reference, and User Engagement Librarian at Indiana University Southeast. “The sense now is that we have to stay on top of the trends that are happening in society and we have to pay attention to the things users are asking for and make sure we provide those. I’m a firm believer in give the people what they want.”

Block is often asked “Are you even going to have a job in 10 years?” A very rude question but one she politely answers with “Only if our institutions stop adapting, something they have been doing for decades now.” Block said librarians aren’t curmudgeonly people who refuse to accept that the Internet has changed the information landscape, and, in fact, they have embraced it.

“According to a report by the American Library Association, about 98 percent of public libraries, not just here but across the nation, offer Internet access,” said Block, “which is actually huge for the communities they serve because it’s easy for people to forget that not everyone can afford Internet access at home. Many lower-income families now rely on library computers or library Wi-Fi to do things like apply for jobs, or complete school work.”

Block also points to the fact that most libraries (including Louisville’s Free Public Libraries) now allow you to check out ebooks from the comfort of your home without ever stepping foot in a library.

The mission of libraries has always been the same, said Block, to serve the community by providing free information access to those who want to educate themselves, and in the digital age they simply have to find new and exciting ways to accomplish that mission — a challenge Jim Blanton, Director of Louisville Free Public Libraries, takes glee in tackling.

“The philosophy I’ve developed over the years while working at libraries is that they should include education, recreation and community building,” said Blanton.

Blanton said he realized the impact good library programming can have on a community during his time working at a library in Virginia.

“We got a few requests from people asking if they could start an anime club at the library and use our space as a meeting ground,” said Blanton. “Once it got started the group just kept growing and growing and at one point the library had to be shut down for renovations, so we found a nearby park for everyone to meet up at and just seeing everyone come together and form this group was a real eye opener for me.”

Blanton said the Internet may have made it easier for people to expand their horizons or find new interests, but it’s mostly surface-level knowledge. To get a real in-depth look at a subject you have to not only read a book or two, but you also have to interact with people, others who share your passion or perhaps experts in the field. Blanton said that is where the library can step in.

“For example if you’re interested in science fiction or fantasy writing, there are communities out there that love that, and we can bring them into the library and provide them with a space to explore that,” said Blanton. “Sometimes we have an author come in and discuss with the community the different elements of their genre, or we’ll have experts come and talk about the industry and how people can get their work published.”

Blanton said the best example of a library’s ability to provide an in-depth exploration of a subject is 3D printing. A recent craze among the “maker community” (a kind of do-it-yourself group) that involves a large machine that for the average person would be too expensive to purchase. But for the Louisville Free Public Library, it was relatively cheap to invest in a 3D printer for the downtown branch, and now, people in the maker community are free to explore an otherwise inaccessible interest.

“Now we get people coming in and creating things together and they walk away from the library not only with an expanded knowledge about 3D printing, but with something they’ve actually made,” said Blanton. “When you get people coming together around a common interest who have never crossed paths before, you’re really connecting people in the community and growing a connection around the library and around a love of knowledge.”

It’s not only the maker community who have been able to expand their creative abilities thanks to the library, but also local artists and authors. Blanton said right now Louisville Free Public Library offers local authors a way for them to electronically publish their material, and will also catalogue it so that anyone may check it out from one of the libraries around town. Blanton said that Louisville Free Public Library is also a part of a program that includes 27 other library branches around the state that allows authors to schedule their own statewide book tour.

Right now it’s only possible for them to publish and catalogue written materials, but in the near future Blanton said they hope to electronically publish and catalog all local artists’ work, including photography, music and film.

“Louisville is special in that we have a very creative community,” said Blanton. “Whether it’s authors, musicians, filmmakers or any type of artist, we want to support them and the whole creative community in Louisville and do anything we can to encourage its growth.”

Blanton said as libraries have adapted to the needs of their members, as well as the rapidly changing information landscape, they’ve become more like community centers with a focus on expanding knowledge.

“I like to say we’ve become a civic neutral zone,” said Blanton. “We’re unique in the community, because all walks of life come through our doors and regardless of what your beliefs or backgrounds are, you can come and take advantage of what we have to offer and also talk to each other about a common interest.”

Blanton said the best example of this unique ability of libraries to break down the usual social/cultural barriers of society is in their coming “Living Books” event.

“We’ve invited a number of people in the community to come in and essentially be living books,” said Blanton. “We’re going to have someone involved in stem cell research, a practicing Muslim, a war veteran, a Harlem Globetrotter and a number of other people who will be there for anyone to come in and go have a conversation with.”

Blanton said they cast a very wide spectrum of living books in the hopes that it will draw in a wide variety of people and it will break down barriers and have people talking one on one to break down stereotypes.

“So one person might come in to talk to the Harlem Globetrotter, but while they’re here maybe they’ll want to go talk to the person who was a refugee and hear their experience too,” said Blanton. “And hopefully when they see that this person telling their experience is a real person, and they share this moment together, it will break down those barriers.”

Events like “Living Books” not only serve the members by strengthening a community’s connection, it also acknowledges another important area of evolution for public libraries.

“Not everyone learns the same way,” said Julie Scoskie, Director of Education at Louisville Free Public Library. “Some people can sit at a desk and read all day, but some people need hands-on experiences to really retain knowledge. So it’s important for us to acknowledge that and provide ways for children and adults who learn by doing a chance to expand their knowledge as well.”

Scoskie said Louisville Free Public Library has made a big push to change that with their How-To Festival, which boasts that someone can learn about “more than 100 things in five hours.” It’s a day of interactive learning where people can get hands-on experience with a number of subjects. From classes on how to film with a drone, to how to train your dog, to how to make baklava with special guest presenters like Alexandra Gerassimides (Mayor Greg Fischer’s wife).

“Identifying needs in the community and working diligently to fill those needs is what keeps the library relevant,” said Scoskie. “And asking what are some things our community needs that they didn’t even know they needed. We’re always looking towards the future and we stay steeped in the community so that we can provide everything they need to learn and expand their knowledge.”

While Louisville Free Public Library has made huge leaps in adapting to the digital age, evolution is a slow process, which can be seen in the very traditional looking buildings most of our local libraries inhabit. But to catch a glimpse of the future of Louisville’s libraries, one only has to take a drive down Dixie Highway to the Southwest Regional Library.

The Southwest Regional Library has a modern exterior, and an eco-friendly design with an abundance of natural light inside and a number of trees and usable green space outside. The interior feels open and inviting, with a number of soundproof glass cubes dotting the floor that can be used for studying, reading or relaxing. And there are almost as many electrical outlets for laptops as there are books. Blanton said that Southwest Regional is essentially the model library for what they hope to do with every library in the city. Including the coming renovation of the St. Matthews area library.

“Southwest Regional is a very modern library,” said Blanton. “It has a lot of natural lighting, and it’s very inspiring. It’s the proverbial third place, not home or work but that third place you want to go and be at. And being there really makes you want to be creative and be your best self, which is what a library is at its heart, a place where all of the resources and tools you need to be your best self are provided.”