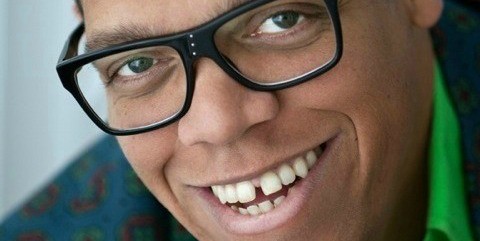 It was the early 1980s in Toronto when a college professor showed young Greg Morton an article about the stand-up boom that was happening in New York City at the time, and, in that article, young Morton read about a hot club at the epicenter of the stand-up commotion called Catch a Rising Star. The story gave Morton a two-pronged purpose: first, he now wanted to be a comedian, and, second, he hoped to someday perform on the stage at Catch a Rising Star. A decade later, Morton moved to New York and his first set as a New Yorker was onstage at Catch a Rising Star, with that decade old article still folded neatly in his pocket. Nearly three decades later Morton is still at it, on the road, appearing on television shows like Comedy Central’s “Premium Blend” and “Comics Unleashed” and “Comedy T.V. with Byron Allen.” Morton took time to chat with us from his Reno hotel room, ahead of his Louisville shows this weekend at The Laughing Derby.

LEO: What is your writing process like? Do you do the old pen and paper, or do you work material out on-stage?
Greg Morton: I write with pad and pen. I usually start out with something occurring to me or striking me as funny — usually I’ll get them when I’m driving, so I have to pull over into a rest stop or something where I’ll jot it down or throw it into a tape recorder. I like to write it more than the recorder, because there’s a connection between brain and pen and paper and hand. I don’t know, it works better for me if I have a pen in hand.

LEO: Has your process changed over the years?
GM: I have refined it over the years. Before I was a little more scattered, less focused. A lot of comics are a little bit ADD — that’s why we got into this. We have creative minds but trouble focusing.

LEO: Being in the industry for three decades, how has stand-up evolved?
GM: It has changed a lot. Mostly styles have changed, it is quite different, where things were more traditional when I started doing comedy; material was more observational than personal. Now comedy is a lot more personal — they tell personal stories and make humor out of their own lives. In the ’80s everything was observational and then you would have jokes for different topics: dog humor, cat humor or jokes about public transit … or airplane jokes.

LEO: These elections must make it a great time to be a comedian.
GM: I have noticed that people are becoming fatigued. This 24/7 coverage of this political cycle is insane. I don’t know if we’re ever going to go back. I think the landscape has changed for good.

LEO: That’s terrifying, isn’t it?
GM: It is, but that’s usually how these things happen. And, if you follow the progression of guys like Morton Donwey Jr. and Rush Limbaugh and how the tone has changed — where you say anything, nothing is off limits, there’s no decorum … it’s where we are now.

LEO: It’s changed from debate and discourse to anger and vitriol, but, is there no coming back from that?
GM: If you believe everything is a cycle, then, yes, it will. Eventually, people become sick of it and go back to the complete opposite end of the scale, which is kinda why we are where we are. [The] government hasn’t done anything for so long, people are just throwing anybody in who will say exactly what they want to hear, whether they like them or not. It’s the only way we can vent — throw someone in that personifies our anger.