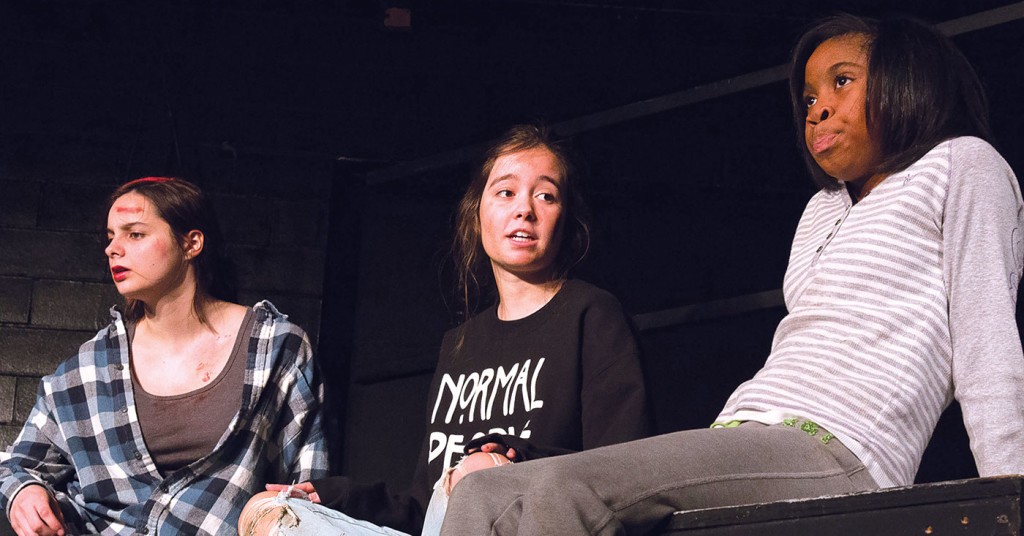 Although many a long play should have been shorter, the opposite is seldom true. Hence, the appeal of a well-curated festival of short plays — where every script is duty-bound to be clear in its purpose and efficient in its means. This season’s Walden Theatre/Blue Apple Players Young Playwrights Festival, which opened last weekend, is a case in point. Six plays are on offer, each one crisply written, sharply directed, and deftly performed.

Created in the context of a playwriting class taught by playwright Diana Grisanti (known to Louisville audiences for works performed by Actors Theatre of Louisville and Theatre [502], among others), these plays could be construed as “workshop” productions that are still “under construction.” And yet, the scripts are already a delight. They’re sophisticated and witty; idealistic and bravely provocative; poignant without being sentimental; and very well told.

Read the writers’ bios after seeing the plays, and you may be startled to find that these writers range from grade seven to grade eleven. Take another look at their bios and you’ll find that (in addition to classwork at their own school), these young playwrights have been members of the Walden/Blue Apple company for two to seven years — which amounts to a slew of nights and weekends. The same is true for the more than 30 young student actors, directors and tech folks who, along with the company’s professional staff bring these plays to life.

The festival (co-produced by Grisanti and Melinda Crecelius, with many collaborators from Walden/Blue Apple Players staff) opens with “Finding My Selfie” by Ruby Osborne (grade 8, Meyzeek), directed by Neill Robertson assisted by Meghan Northup. It’s a play that takes a sharp-edged topical approach to an enduring adolescent dilemma: how to fit in. Raised as an ex-pat in China, Sarah (Ashley Gaithier) returns home to the U.S. Although her parents offer to home school her, she opts instead to try to fit in — at a school where her classmates’ worlds are largely defined by the blue glowing screens of their smartphones. Ignored at first, the hapless Sarah suddenly captures the attention of some “mean” girls (Alexandra Polur Gold and Meaghan Northup) who toy with her (one of the girls has a passing notion that it might interesting to try not being mean), mock her right down to her unfashionable shoes, and then, of course, celebrate themselves with a selfie. Happily, though, Sarah is smart and resilient observer of this strange culture of loathing and self-regard — and soon there’s an exuberant moment when she finds genuine companionship with a colorful outsider (Annika Alvarez). Other performers: Lindsey Hornung, Zoe Peterson, Jude Stivers, Connor Madison.

“Broken Record,” by Will DeVary (sophomore, Floyd Central), directed by Frances Rippy (sophomore, DuPont Manual, mentor Melinda Crecelius), is a powerful and unsettling work that opens on a group of smart teens (Lindsay Lisanti, Janice Partee, Brooklyn Durs, Olivia Elkins, Abel Sgro, Samantha Bliss, Makayla Roth, Jack Foldyna, Joseph Heberle) engaged in typical, casual coffeehouse conversations that range from comparing roasts to staking out idealistic plans to be on the forefront of “enacting change, real changes.” When news of a distant school shooting flashes across their smartphone screens, the group splits into familiar factions — and in a bravura piece of writing the playwright distills the all-too-familiar and all-too-frustrating arguments that paralyze every effort to address the problem gun violence. Then everyone falls back into the previous routine — for a moment, at least.

Meghan Northup (grade 7, DePaul School) offers an existential crisis and a droll bit of experimental theater in “Non-Real-World Problems.” Here, a feisty young lass named Riley (Mia Kovats) suddenly finds herself speaking in rhyme — even when giving a school report about Apollo XI — much to the annoyance of her teacher (Clark Jefferson) and her mother (Lily Schweitzer). Over time, Riley comes to realize that she is but a player on a stage, and that her every word and action is being controlled by external forces in the form of a director (Laine Lloyd) and stage manager (Samantha Poole). But before that happens, a young hero named Eric (Elijah Kelso) shows up with a fierce determination to rescue Riley from something other — whether she wants rescuing or not. And when Riley goes off script…

“The House of the Misunderstood,” by Emma Schweitzer (grade 7, Noe Middle; directed by Sabrina Spalding) is both bleak and uplifting. On the one hand, it’s an unsparing indictment of the ways in which children are too often failed and betrayed by the adults in their lives — both their parents and adult professionals. The six youngsters incarcerated in this “house of the misunderstood” (Ruby Osborne, Sara Seim, Shea Ryan-Kessler, William Dolan, Adeleke Goring, and Bryce Abell) have arrived by various routes.

But as one character notes, all of them have been placed there by adults “hoping we’ll fix our screw-ups.” And when she goes on to observe that each of these kids is also the result of an adult’s screw-up, she sounds not a note of denial but of determination. “We’re the future,” she says. “So I guess we’re the ones who have to fix it.” And though this is a remarkably unsentimental play, in the end its portrayal of these kids who are determined to keep knocking on doors is as compassionate as it is stern.

The festival ends with two clever takes on great themes.  “Fake,” by Ruthie Dworin (junior, Louisville Classical Academy; directed by Jennifer Pennington) offers a rigorous — and rigorously comic — analysis of the nature of reality as seen through the eyes of three characters (Demi Handley, Zoe Peterson, Area Ramos) who find themselves on the brink (both literally and figuratively). The philosophical rigor with which they cross-examine one another on subjects like fear, pain, and the validity of physical sensation is as smart as it is fun.

And that same intellectual spirit infuses “The Devil in Little Debbie” by Zoe Peterson (freshman, Ballard; co-directed by Peterson and Charlie Sexton). After dropping a brownie on the floor, Chad (Killian Meaney) declares that he’d willingly sell his soul for a replacement brownie. And of course, the Devil (Andrew Wagner) immediately arrives to close the deal. What ensues is a Faustian delight with all the contemporary ingenuity you’d expect from a 21st century Daniel Webster.