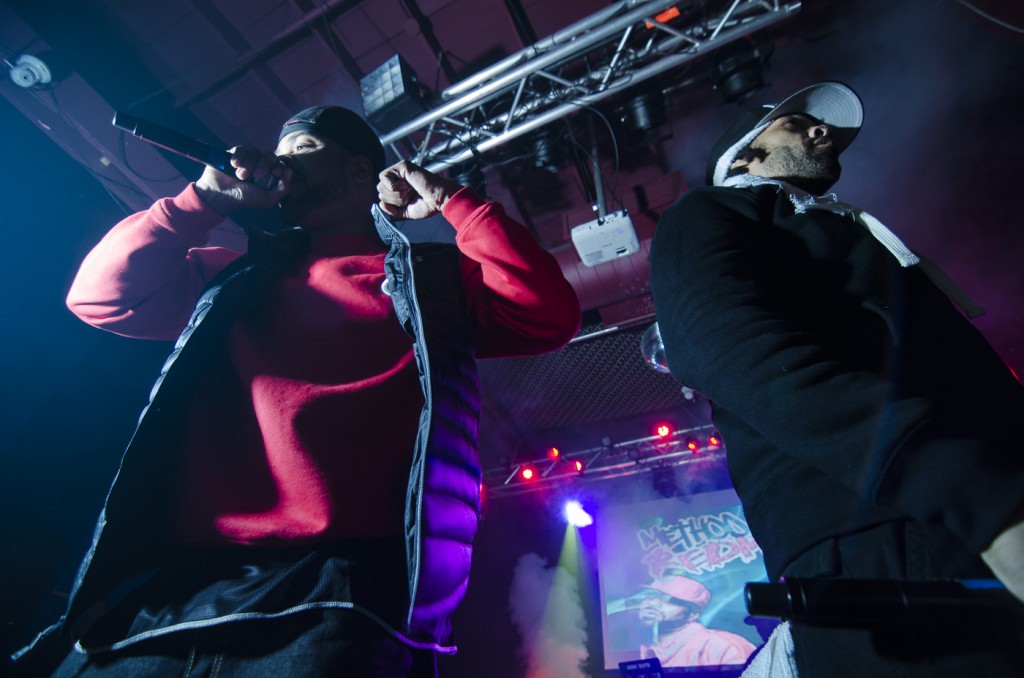 Did you know that longtime collaborators Method Man and Redman dropped a new album just two years ago? Turns out it doesn’t matter, as Redman succinctly put it that “Y’all want to hear that old shit” — an undeniable truth as there ever was — at Diamonds Pub on Friday night.

Thus proceeded the evening with a string of hits performed by the veteran emcees to a crowd packed in tight and ready to blow. It was a minor miracle that I only witnessed two fights given the feeling in the air Friday night, as the crowd measured equally between a younger set weaned on these rap classics and the older crowd poised to relive their youth by whatever means possible. Meth and Red knew this too, hustling to a crowd like the professionals that they are, with an almost ADD-like bounce from track to track.

So you know, they definitely played Method Man, albeit without the colorful skit that traditionally starts it off. In fact, they performed quite a few Wu-staples, and vigorously and repeatedly acknowledged the importance of ’90s hip-hop as if it were the pinnacle of genre. The thing is, they absolutely believe in their message, refreshing after all these years, but still reading a bit stale in the after-image, like an old man wanting the kids off his lawn. Was it better back in the day? Only time will tell, or so they’d have you believe.

From there they settled into a steady stream of abbreviated hits. By that, I mean they focused on tighter and often shortened versions of their pre-existing songs, although it’s hard to say if this was by virtue of the fact that not all featured vocalists on those tracks were present, or to cater to the attention span of Generation Twitter. In either event, they prefaced almost every song by calling out the year or circumstance that any particular song was written in. You might hear “this was from How High,” or some reference to ’92 or ’94 as a year of prominence, which is entirely accurate from their perspective.

They wrapped the set up with a dull thud, meandering off into the sunset rather than ending on a high note. Traditionally, you end with some kind of hit or something and then get off the stage, leaving the audience wanting more. Instead, Redman told the crowd that he had a pocket full of CDs for sale — just 13 of them, mind you — and that he would part with them for the low, low price of $20, all while spitting a few verses from the back of the stage in the shadows. Was the show over or not? I was confused, which is not a good state to end an evening, but quite possibly (and by the looks of it) how many did.

Fortunately, Meth and Red know how to work a crowd and they did a fantastic job of it, giving more energy than most of the Wu-Tang members that I’ve seen over the years, and, in a way, that felt honest. They have a delivery that often surpasses their contemporaries, which seems to impart a kind of sagely wisdom. Whether that’s hip-hop swagger or ageist leanings is in question, as the pair relied heavily on their older material to the detriment of any real forward progress. Regardless of motive, it begs the question, made real here by the sheer volume of attendance, is nostalgia a goldmine … or a curse to new art? By privileging the old for the new, Meth and Red had a pretty definitive answer to that question, leaning hard on their former glory over anything new, serving ostensibly as a blunt admission that their best work is behind them.