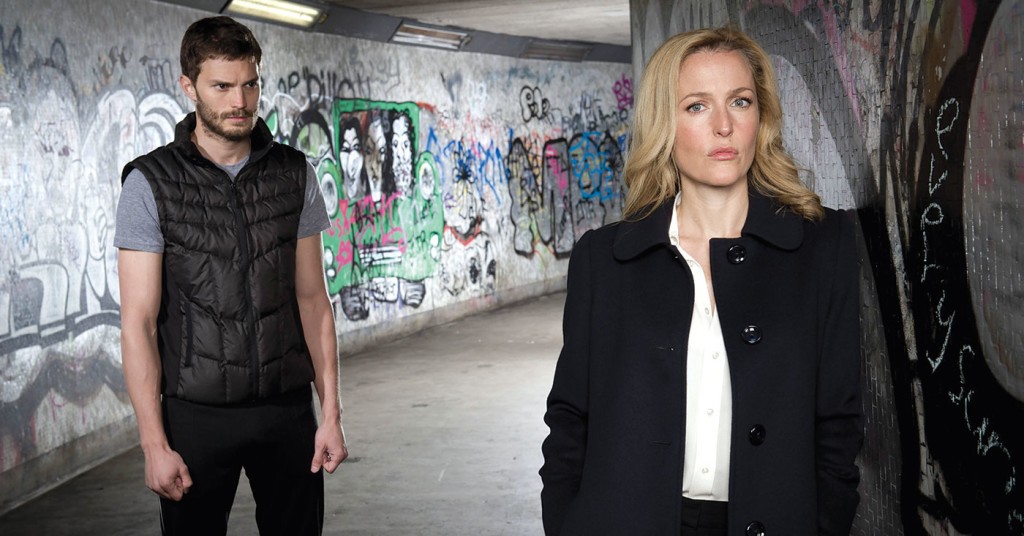 THE BOLD ONES: THE NEW DOCTORS
1969; $49.98; UR
This early cutting-edge TV series gave Steven Bochco the street-cred he needed to create “NYPD Blue”, “Hill Street Blues”, and “L.A. Law.” David Hartman, E.G. Marshall, and John “Enter The Dragon” Saxon represent the best and brightest in modern medicine, each week treating some of Hollywood’s finest, often using then-unheard-of techniques. In one famous storyline they consider an analysis of fetal DNA to detect a potential birth defect in the womb, in hope of treating it there — a good three decades before that technique became a reality. Saxon dropped out in 1972; watch for him in “Bring Me the Head of Lance Henriksen” later this year.

THE FALL: SERIES TWO
2016; $24.98; UR
Gillian “X-Files” Anderson temporarily made us forget about Agent Scully in the first season of this very original British detective series set in Belfast. She’s a policewoman hot on the trail of serial-killer Jamie “Fifty Shades of Grey” Dornan, who despite being a loving and attentive father, enjoys trapping and torturing women. This season starts with Dornan’s “Specter” fleeing the city, stopping only long enough to deal with someone from his past who might squeal to the cops. But Anderson sees the truth behind this desperate act, putting her back on his trail again. More menacing, smart and exciting than anything made on our shores.

CREED
2015; $16.99-22.99; PG-13
We are big fans of Silvester Stallone’s “Rocky” films, particularly the groundbreaking original which still stands as the greatest indie flick in history. This picks up his story with the now long-retired Rocky Balboa (Stallone), eventually agreeing to train a tough young fighter named Adonis — the son of Rocky’s most famous foe, Apollo Creed. It’s great to see Rocky back on the screen again; make sure you rewatch the original film first for full effect.

DRUNK HISTORY: SEASON THREE
2015; $26.98; UR
Our guiltiest Comedy Central pleasure continues as insanely, irresistibly, unredeemably stupid as ever. The concept? Someone tells a completely true historical tale in their own words — drunk as a skunk — while top-tier actors pantomime/perform the action. Our favorite this season includes Muhammad Ali refusing to fight in Vietnam, as portrayed by Gaius “Aquarius” Charles, with Sam “The Office” Richardson playing his bud, Jim Brown. Laugh-your-ass-off crazy.

LOST IN HONG KONG
2016; $9.99-14.99; UR
Once a carefree artist, Xu Lai (veteran HK action-comedy star Xu Zheng) now designs brassieres for a living to support his baby-crazy wife and her whole warped family. He quietly dreams of what might have been with his teenage crush, Yang Yi, until fate steps in: He and Yi will soon be on vacation in the same remote area! The fantasy of hooking up with his dream girl drives him forward until … the police question him about a murder! A truly bent combination of action, stunts, frantic assignations, lost horizons, and nutjob in-laws that plays like Harold Lloyd on crack. You gotta see this!

MEXICAN MEN
2016; $22.99; UR
An unrepentant Gay sausage-fest from South of the Border that quite literally wallows in the joy of the male form. A collection of five short films from Julian Hernandez and prolific writer/producer/director Robert Fiesco, some documentary, some fiction, but all presenting a unique look at the world, whether the topic is first love, lonely hook-ups, or the relationship between dance and prostitution, they all explore the many ways we humans manage our unmanageable loneliness. In Spanish with subtitles.

THE DANISH GIRL
2015; $24.99-31.99; R
Man, what a pedigree! Tom Hooper, director of “Les Misérables”, brings together Eddie “The Theory of Everything” Redmayne and super-hot young starlet Alicia “Ex Machina” Vikander to tell the true story of Einar and Gerda Wegener. In 1926 Einar (Redmayne) allows his artist wife to paint him as a female in one of her works. He enjoys the resulting attention, becoming more immersed in distaff life to the point of changing his name, eventually becoming one of the world’s first transgendered women. The film primarily focuses on what effect his sex-change had on their marriage amid a confused and unprepared Danish society, with parallels in present-day America. One seriously-cool movie, nominated for four Oscars.

WIZARD BARRISTERS: COMPLETE COLLECTION
2016; $49.99; UR
For originality (and more than a skosh of fan service) you can’t beat this anime series. Set just a few years in the future, our world is in crisis when some humans come to possess magic powers. The authorities quickly enact laws to prevent their use, and set up courts to punish those who break them, with “Benmashi” — magical lawyers — to defend the accused. None of it makes any sense, of course, with lots of beautiful, pubescent girls in flirty skirts and pony-tails fighting for justice while discovering the opposite sex. A pastiche of breathtaking artwork, incomprehensible plot jumps, weird cuts, and one-dimensional characters that is somehow very entertaining.

*** More Recommended Videos for our On-Line Readers, Only!
FORBIDDEN ZONE
1980; $19.99; R
Dear Gentle Readers: We have exposed you to some pretty screwy stuff over the last two decades, but nothing dreamt of by God nor Man compares to this truly sick, twisted, damned and demented offering. Danny Elfman (“The Simpsons” theme song) and his writer/director/star brother Richard take us on a trip through a world that plays like John Waters on crack when the director’s wife falls through a set of basement intestines into a 6th Dimension land ruled over by King Hervé Villechaize (“Fantasy Island”), who instantly falls in love with her. Not surprisingly, this p.o.’s Queen Doris (Susan Tyrrell , “Big Top Pee-wee”). Imagine “Eraser Head” meets “The Wizard Of Oz” with extra poop-humor, rampant racism, over-the-top misogyny, blatant Jew-bating, ultra violence, and shocking perversity … all set to great music by the Mystic Knights of the Oingo Boingo! Truly sick and twisted, it may be weeks before you can decide if this is Art For The Ages or complete and total bat-crap. Now available in a fully restored Blu-Ray Special Edition. Be unafraid ye children, but tread lightly.

RIDDLE ROOM
2016; $21.95; UR
We love no-budget indie movies: When a filmmaker has no hope of competing with today’s mega-blockbuster cinema, he/she must instead take the viewer on a very personal journey. Enter Marisa Ruby, a veteran of indie shorts, as Emily, a loving wife and mother who finds herself roughly kidnapped and tossed into a bare room. Her only hope of escape lies in clues scattered within the room – which also reveal something unexpected about herself. Simple, crude, effective.

THE GIRL IN THE BOOK
2015; $24.95; UR
Lovely Emily VanCamp (TV’s “Revenge”) plays the now-adult victim of teenage statutory rape at the hands of Michael “The Girl with the Dragon Tattoo” Nyqvist – who ultimately turns her provocative submission into a best-selling book! This frightening exposure wrecks her life, launching a raw personal journey. A film you’ll be talking about for days, and a breakout role for little Ana Mulvoy-Ten (TV’s “Vanity”) who plays VanCamp’s younger self, drawn irresistible to Nyqvist’s bed seeking … we won’t spoil it. A raw, captivating story that deserves a wider audience.