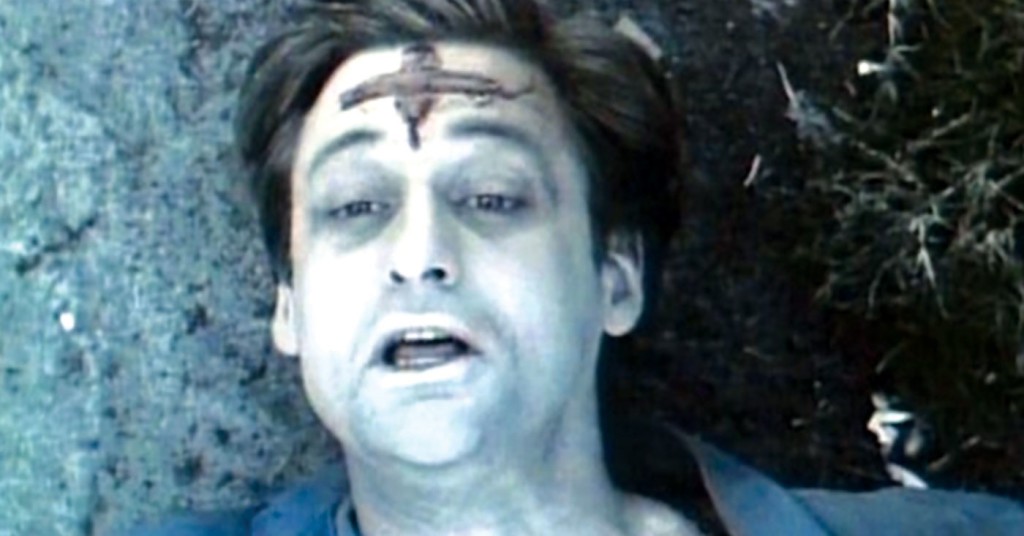 The Serpent and the Rainbow

THE SERPENT AND THE RAINBOW
1988; $29.99; R
Horrormeister Wes Craven diddled with the true story behind the discovery of tetrodotoxin, a powerful neuro-drug, to create this psychedelic voodoo adventure in the dark wilds of Haiti — turning Bill Pullman into a bankable star in the process. Pullman plays real-life researcher Dennis Alan, who travels to Haiti to see if there’s some unknown chemistry behind the legends of resurrected Zombies. There he runs afoul of an evil sorcerer (Zakes Mokae, “Waterworld”) who nails Bill’s scrotum to a chair — youch! — afterwards treated by underrated actress Cathy Tyson. With some of Craven’s best-ever imagery; a complex tale of madness, danger, toads, and premature burial that will haunt you for days. Now in a Blu-Ray collector’s edition will all the bonus goodies you can stand. Recommended.

MILLENNIUM / R.O.T.O.R.
$25.49; UR
A pair of lovable misfires from the late 80s. The first is a well-remembered time-travel WTF-generator that stars breathtaking Cheryl “Charlie’s Angels” Ladd and in-over-his-head Kris Kristofferson, along with Daniel J. Travanti, starting his ex-“Hill Street Blues” career. Ambitious as hell, with some great ideas, it was just a wee bit ahead of its time. The second film is a true watershed event for bad-movie lovers like ourselves: A prototype crime-fighting robot goes berserk, killing everyone in sight while day inexplicably changes to night and back again, microphones drop into view, and actors shuffle in to read cue cards. Life just doesn’t get any better.

MY ALL AMERICAN
2015; $19.99-22.99; PG
Regular readers know that we avoid sports-movies like the plague: the plots are predictable, and the fawning worship of athletes is beyond our understanding. But this little biodrama on Freddie Steinmark (Finn “The Big Short” Wittrock) is too infectious to resist. Freddie is too small for football, but with his dad’s help he trains hard — hard enough to draw the attention of University of Texas coach Aaron Eckhart, who arranges a scholarship. With hard work and his friends at his side all goes well until … Well, you knew something had to go wrong, right? With Sarah “Once Upon A Time” Bolger, terrific as his sweetheart, and Robin “The Mentalist” Tunney.

SECRET IN THEIR EYES
2015; $19.99; PG-13
We’re tempted to call this murder/crime drama a cameo film, but with headliners that include Chiwetel Ejiofor, Nicole Kidman, Julia Roberts, Dean “Under The Dome” Norris, Alfred Molina, and young Zoe “Boyhood” Graham, it may be too top-shelf to qualify. The adults in that list portray some of America’s hottest investigators and prosecutors, their world shattered when Roberts’ daughter (Graham) is savagely murdered. Fast-forward a dozen years when they find their first real clue to the killer, who appears to be … We won’t spoil it. We may have liked the Argentine original from 2009 a bit more, but how can you argue with all this talent?

THE GOOD DINOSAUR
2016; $22.99; PG
Not Pixar’s best-ever, but with more than enough heart, truth, and whimsy to charm young and old alike, this imagines what early Man’s life might have been like had the dinosaurs not died out. Enter Arlo, an adorable, lost, easily-frightened little saurus who makes friends with a grunting young human, and together they learn and grow, both physically and emotionally. Negative reinforcement comes from a family of T-Rex bullies. So why the PG rating? This thing has some real emotional power! We saw grown men tear-up in the theater. Too good for kids.

THE IRISH R.M.: THE COMPLETE COLLECTION
1983; $38.98; UR
For our money, the Irish invented humor. You disagree? Then watch this simple, brilliant comedy of manners, mannerisms, and downright wacky Eire at the birth of the 20th Century. That’s where stalwart Resident Magistrate Maj. Sinclair Yeates (Peter Bowles from “Rumpole of the Bailey”) holds court, or at least tries to as the locals conspire to confound and confuse his attempts at British standard justice. And the biggest fly in this oh-so proper ointment is “Flurry” Knox (Brian “Fair City” Murray), the area’s resident full-time mischief-maker. A watershed of humor based on the beloved books of Sommerville and Ross (highly recommended); perfectly hilarious, simply wonderful.

FRANKENSTEIN
2015; $19.99-24.99; R
Not to be confused with the Universal Studios classic, this is an original low-budget “what if” which ponders how a man-made monster would view we humans if he were created, then rejected and dumped on the streets of LA. That plot, by the way, more closely reflects Mary Shelley’s original book than the Boris Karloff standard. Danny Huston from “American Horror Story” plays the Doctor, with Xavier “Fury” Samuel as the creature, Adam; Carrie-Anne “The Matrix” Moss and horro-vet Tony Todd assist.

A More Complete Listing and Free Vids at VideotTapeworm.com