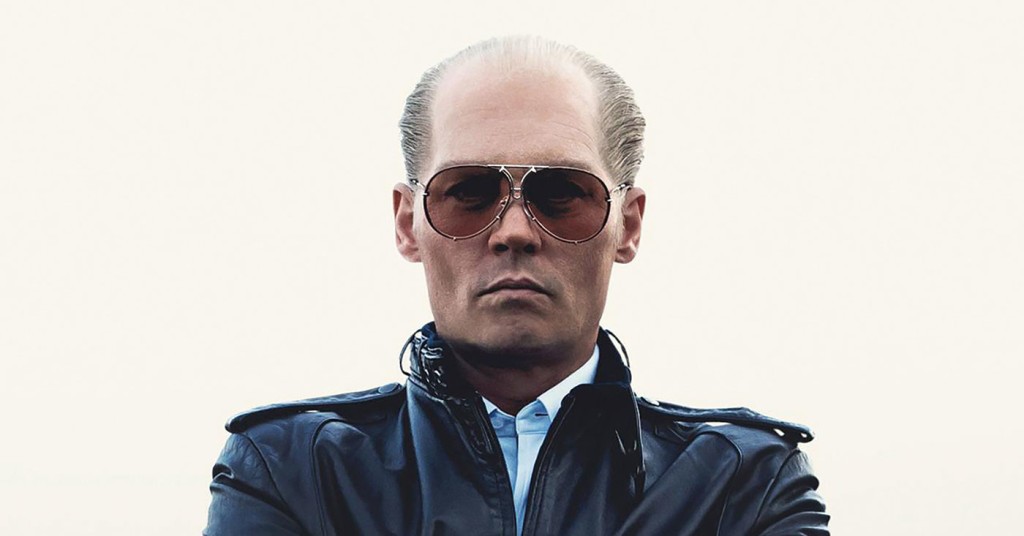 BLACK MASS
2015; $14.99-22.99; R
This dark real-life crime drama was nominated for all kinds of awards, most of them aimed at Johnny Depp for his frightening portrayal of Irish mobster James “Whitey” Bulger — we can’t imagine ever seeing him in another comic pirate caper. But the rest of the cast is just as good, from Joel “Exodus: Gods and Kings” Edgerton as the FBI agent who cooks up the scheme to use Bulger to counter the Italian mafia, to Benedict Cumberbatch, Dakota Johnson, Kevin Bacon and Juno Temple, to name just a few. It’s Depp, however, who walks like a giant through every scene: smart, menacing, quiet; a powderkeg awaiting its spark. Exceptional.

STEVE JOBS
2015; $22.98; R
Michael Fassbender (Eric/Magneto from “X-Men: Days of Future Past”) portrays the late Apple founder and CEO as a gifted intellectual with an evolving God complex, shown here at three critical moments in his career. And while his performance is astounding, the real treat for us was to see Seth Rogen step up as Steve “Woz” Wozniak, the once-loyal nerd whose technical prowess made Apple Corp. possible. The script by Aaron Sorkin is a Master’s course in film writing, the soundtrack rides on Bob Dillon and Joni Mitchell, supporting players include the likes of Kate Winslet, Jeff Daniels, and the vastly underrated Sarah Snook, all directed by Danny “Trainspotting” Boyle. How could this not be terrific?

ESTRANGED
2015; $29.98; UR
Amy Manson from “Once Upon a Time” and “Being Human” is the best thing about this minor Limey thriller. She’s a confused young woman estranged (duh) from her cold, odd family, but forced to return after a serious accident leaves her confined to a wheelchair with almost no memory of her past. Accompanied by weirdo boyfriend Simon “Westworld TV” Quarterman — who probably caused her accident — there is one particularly important memory she desparately needs to recover: Why she left home in the first place. A nice, original, low-budget twist on a hackneyed plot device.

FATE/KALEID LINER PRISMA ILLYA 2WE!: COMPLETE COLLECTION
2015; $59.98-69.98; UR
As if you couldn’t tell by that alphabet-soup title, this is an anime series, a spinoff of “Fate Stay Night” and “Fate Zero. Please” … which really doesn’t tell you very much, does it? What’s it about? Oh, about four hours. What? You want more?! Okay: it’s essentially a serialized video game in which the heroine, Illyasviel von Einzbern, is gifted magical powers by a holy ruby, powers which were destined for a sorceress named Rin Tohsaka. This sets in motion a quest by both to find the seven Class Cards, each holding the spirit of a legendary hero. Oddly Sapho-erotic, with pigtailed cuties innocently kissing, touching and bathing, this is engrossing and fun, particularly if you’re an RPG player.

LABYRINTH OF LIES
2014; $31.98; R
Within a decade of the defeat of the Nazis, Germany had reinvented itself in the eyes of the world, becoming a nation on the cusp of international respect — and desperate to forget the atrocities of WWII. But one German journalist, Thomas Gnielka (André Szymanski), must drive the past back into the light when he discovers the former commander of the Auschwitz Death Camp working as a … schoolteacher. Gnielka rallies a neophyte prosecutor and together they set out to make Germany accept its shame and punish its guilty for all the world to see. As you can imagine, not every German embraces their efforts, as presented in this excellent and exciting historical drama based on real events. In German with subtitles.

PRAY FOR DEATH
1985; $26.98-29.98; R
Master martial arts actor/fight choreographer Shô Kosugi made box office history with this legendary sword-powered tale, proving that Western audiences wanted more drama than the old Shaw Brothers-inspired chop-socky nonsense provided. He plays a Japanese-American businessman who moves his family from Tokyo to Houston, Texas where they encounter a murderous redneck crime syndicate (the Republican Party). When violence finally pushes him over the edge, he reveals a dark ninja secret, and sets out on one of the greatest revenge/rescue sequences ever filmed. A true classic, now available in a Blu-Ray special edition with all the trimmings. Highly recommended.

THE TRIALS OF JIMMY ROSE
2015; $22.95; UR
Ray Winstone, who has had a storied career playing tough, impenetrable mob men (as well as Will Scarlett in 1984 TV’s “Robin Hood”), is the title character, just released from prison; older, wiser, yearning to be a better man for his children and grandchildren in this three-part Limey miniseries. How’s it going? Well, his adult children are afraid of him; his granddaughter is a drug addict; and his wife is sleeping with a cop thanks for asking. Can this unlovable, violent human trainwreck win a place in their lives? Does he even deserve it? A hard-edged, brutally honest, yet very likeable human drama that avoids easy answers. Recommended.

*** More Recommended Videos for our On-Line Readers, Only!
99 HOMES
2014; $12.98-26.98; R
Andrew “Spiderman” Garfield grew a beard in shame for allowing his agent to rope him into this ridiculous – if entertaining – tale of a earnest construction worker who is cheated out of his family home by a smarmy real-estate douchebag (Michael Shannon, General Zod from “Man Of Steel”). In a weird twist he then makes a Faustian bargain with said douchebag, becoming one himself in order to protect his son and mother (a too-young looking Laura Dern). Some Internet jokers pushed for an Oscar. Like we said: entertaining.

AKAME GA KILL: SEASON 1
2014; $53.98-129.98; UR
One of the most divisive anime series’ in our recollection, with legions of haters who constantly gripe about it on-line, and equally rabid fans who defend it like a religion. An inexperienced young man, obsessed with the notion of joining the Army, travels to the big city to prove his mettle. There he is tricked by a woman, robbed and left homeless, then rescued by a beautiful young girl – only find himself surrounded by a group of assassins who eventually make him a member. It is this unpredictability which seems to confound anime fans the most, especially when major characters are killed with no apparent emotional payoff or plot advancement. Whatever. We liked it.

CRIMINAL ACTIVITIES
2015; $14.98; UR
A crash course in how to turn a potential piece of generic celluloid into a damned-fine little movie. The key ingredient? John Travolta! He and his ugly toupee, with help from Michael “Boardwalk Empire” Pitt, Dan “Downton Abbey” Stevens, and Christopher “A Most Violent Year” Abbott, step in to turn a run-of-the-mill tale of risky investments and mob money into something truly worth watching, all for first-time director Jackie Earl “Watchmen” Haley. It pays to have good friends.

HANGMAN
2015; $12.98-24.98; UR
Outre’/Indie British filmmaker Adam Mason (“Pig”, “Broken”, “Junkie”) takes the found-footage genre and mutates it into something truly wicked and very real by filming his tale entirely through home-surveillance other extant cameras. Jeremy”Law and Order” Sisto and Kate “Shaun Of The Dead” Ashfield play the husband and wife whose pleasant home is insidiously infected by unstable Eric Michael Cole (“Mr. Holland’s Opus”), an escalating psychopath. Even the kids are great, especially lovely teen “Ry” Simpkins – a breakout star in the making. Worth your time.

THE VINCENT PRICE COLLECTION III
$62.98-69.98; UR
While we generally avoid mentioning movie sets of count greater than two, we couldn’t resist this Blu-Ray release which contains the Jules Verne-inspired “Master Of The World”, Roger Corman’s “Tower Of London”, the short, seldom seen “An Evening of Edgar Allan Poe”, a classic, cheezy, witch-revenge howler, “Cry of the Banshee”, and the vastly underrated “Diary Of A Madman” featuring lovely Nancy Kovack. And if that weren’t enough, the creators kindly filled each of the four discs with tons of rare bonus goodies, including a pair of Price-filled episodes from that 50’s fountain of TV scifi, “Science Fiction Theater”! A must-own.

TURBO KID: ULTRA TURBO CHARGED COLLECTOR’S EDITION
2015; $29.95
At first glance you might be fooled into thinking this is from the dystopian-wasteland/BMX-bike wave that stunk up the ‘80s – and the producers would be glad to hear it! But it’s really a goofy, entertaining, heartfelt, all-new slide through that lost genre, featuring Michael Ironside as the eye-patch wearing warlord of a post-apocalyptic hell-scape populated by morally-bankrupt scavengers. One of those scavengers is The Kid (Munro Chambers, “Degrassi: The Next Generation”), who is lucky enough to be saved by cute and sexy Apple (pink-haired minx Laurence Leboeuf, who completely steals the movie). Trust us: This is the single most stupidly entertaining bunch of nonsense we’ve seen in a coon’s age. Now available in an infectious 3-disc set.