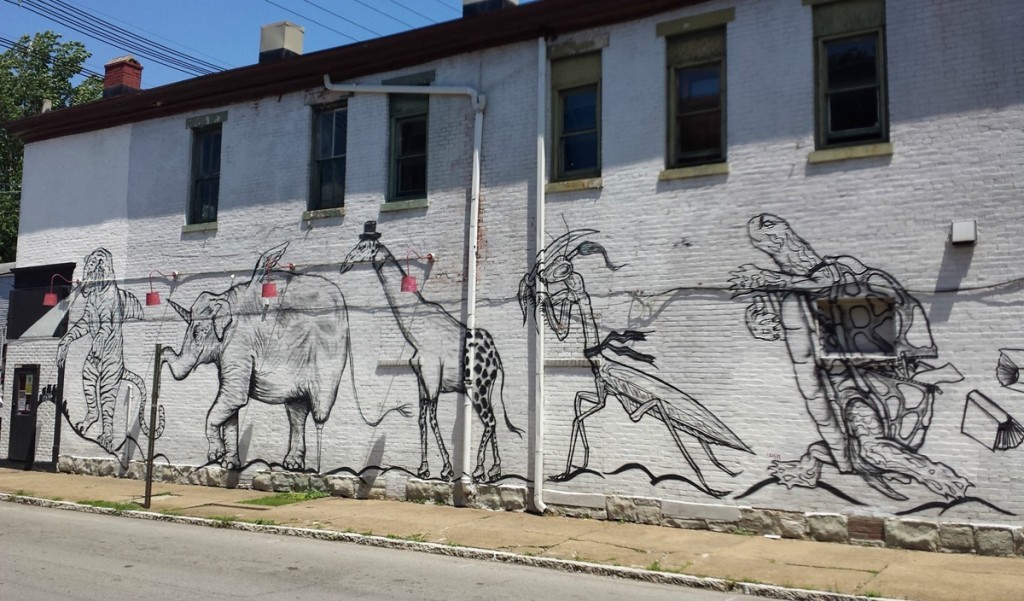 [The above image is “Hilltop” by Chris Chappell.]

Calling all blank walls – Chris Chappell (clchappell.com) would like to paint on you. He’s so passionate about murals he wants a mural festival in Louisville (after all, Lexington has one).

LEO: I know you best as a glass artist, especially for skateboard decks, but that’s only one medium you work in. What do you like to use to create?

Chris Chappell: That’s funny; I’ve never considered myself a “glass” artist. I just happened to get a job working around it, so naturally I had to create with it, and making these glass decks is my favorite thing to do with glass. But really I like a lot of things to create with, from spray paint to ballpoint pens to calligraphy markers to video. It’s all good, but spray paint is paying the bills … so that’s what I’m using most right now, but I think the best thing I’ve ever made was an “un”instructional painting video.

LEO: Artists find inspiration from unusual sources. Who or what inspires you?

CC: Almost everything I see in life: the good, the bad, the tragedy, the joy, nature, city. So much really, but my subject matter is usually just inspired by what I want to see at that moment, like searching through images and whatever strikes me is what I’ll paint or draw. Sometimes you have to just dive in and paint or draw whatever. It doesn’t have to have some deep meaning, it may be more important or fulfilling to just do something. I’m inspired by people that do that, whether it’s art or not — do something.

LEO: How did you get the commission to create the waterfall mural for My Morning Jacket?

CC: By chance, I guess. Another artist couldn’t do it or something so they called me. Not the band, but the Portland Initiative, who got the wall and teamed up with them and an organization called beautifyearth.org, which seems to be a pretty cool group. Their mission is to create one million murals all over the world in five years or something crazy, so if you got a wall you can contact them and they may be able to fund it. I’d like to see someone in Louisville start something like this, “BeautifyLouisville.”

LEO: What are what you call “calligrafigures”?

CC: I haven’t done one of those in a long time, but thanks for asking. I really still like those things and would love to do a mural series with them, so let me know if you know of 5 or 10 blank walls standing around. But, anyway, they are just portraits/figures done with calligraphy strokes and I just came up with the name. It made sense.

LEO: What is something people do not know about you that you want people to know, of course?

CC: People may know this, but if not … I’m really concerned with the Louisville public art scene, mostly the lack of murals, I guess. If you pull into Louisville from any angle it looks really corporate, from the Yum Center to all the UofL stuff. I think there are more computer-printed “murals” than hand-painted ones here and that sucks. There’s a mural festival happening right now in tons of cities all over the world. Lexington even has one every year and their murals are pretty amazing, so I’d like to see more murals, really, and help where I can. Public art is important and can give a city or community a personality and hopefully improve the quality of life. [We need] to start a mural festival here in Louisville. If you know of a blank wall that could use some life, then contact me.