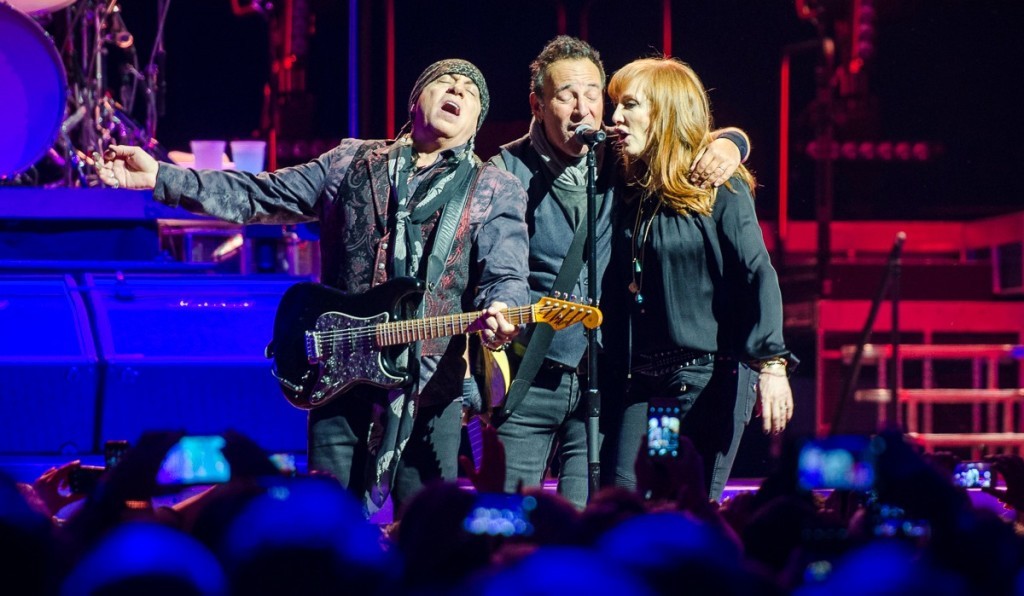 Right before he launched into “The Ties That Bind,” the opening track off of “The River,” which he played in its entirety on Sunday night at the Yum! Center, Bruce Springsteen referred to the 1980 classic as his “coming-to-age record.” I never noticed that shift catalyzed by “The River” — a focal pivot of how he viewed the world in a way that can only be created by age — but it makes perfect sense: The records he made in the ’70s were about living on the outskirts of a normal, mundane, beaten-down daily grind and this was the start of a series that aimed to understand it — how people ended up that way, and the toll it takes on them. I could always hear it in “Nebraska,” my favorite Springteen record, the stripped-down, dark and straight-forward record released two years after “The River” that is particularly blunt with its characters and their hard-luck developments. But, “The River” was a record that I seemingly always overlooked — one that I would listen to every year or so in its entirety, never really revisiting songs individually and then put it back on the shelf, neither disappointed by it or newly addicted to it. It always fell right in the middle. Solid, but never in perpetual rotation. But, after Sunday night’s show, I’ve probably listened to it more times than I have in the last five years, and not just because I’m writing this review, but because I can’t get it out of my head. More times than I remember, I’ve been late to the game on an album. Some albums just don’t resonate with me on the first, second, third or fifteenth listen, and then, a week, month or a decade later, it just clicks. But, I’ve never had it happen during a concert, as it did with “The River.”

There are obviously a few concerns about someone playing a record from 35 years ago in its entirety. 1) How well does that artist still connect to every one of those songs? Sometimes you hear of musicians who feel distanced from a time and place to where they once were. Not that they’re embarrassed by the material or anything like that — although I have talked to people who won’t play some songs for that exact reason — but is there still enough raw emotion to carry something on in a way that doesn’t feel forced or just purely nostalgic? 2) How do the vocals translate to the stage three and a half decades later? 3) And, in this case, with “The River” being an extremely long double album, are there gaps in terms of quality that will lose the audience?

I never doubted that Springsteen would put on a great show. The guy’s a performer’s performer to the bone, and one of the most talented songwriters who has ever lived, with a nine-piece band that captures an unhinged, “Exile On Main Street”-esque kind of intensity, pairing the heart of a bar band with the magic of the tightest studio albums. But, there are always questions with something like this, even with somebody that seems as legendarily  unsinkable as The Boss. And, in my mind, the answers to the ones that I had were: 1) It was obvious that he was still extremely connected to the songs off of “The River.” Before he played “Independence Day,” he delivered one of the few elongated interludes, saying it was about how, for a long time, he didn’t really understand why people compromised their dreams and became complacent, but, as he was writing that album, his perspective gained the depth to realize some of those people didn’t give up, but instead they were making sacrifices. They were courageous not cowards. It was just another form of being bold. And, all these years later, he still openly seems to connect with that on some level. Where some musicians create a sort of discography that tracks the landmarks of their own emotional landscape, Springsteen has spent a career in trying to figure out the sunken class. And, because in the time that he was writing “The River” his thought process took a hard turn, it seemed to create a particularly strong bond with him, one that is certainly still evident. 2) In terms of his voice, as anyone who has seen him live or can work YouTube knows, his gravel-y wail has aged remarkably well. Playing three-plus hours a show has probably more than kept him in shape to play a 1 hour 23 minute record that has a lot of big chorus’ and dense verses. At 66, his voice is still remarkably intact and fit to carry an extremely ambitious record like “The River” in its entirety. 3) There are very few albums in existence that are perfect all of the way through, and “The River” isn’t one of those — although I may be hard-pressed to find three double albums that are — so, yes, there were songs, especially when he got to the songs from the second disc, that slowed things down a bit. But Springsteen has the charisma and crowd control to remain captivating. The audience would sit and focus during ballads, but he could get people to bounce back up within seconds of one of the many big, lush rockers on that record. When he played the first disc, from “The Ties That Bind” to the title track, it was as good of a run as when, last year, Prince rhetorically asked the crowd if we wanted to hear nine hits in a row and then delivered. And, for someone who plays for more than three hours, he wastes very little time. A quick count in was the only thing that separated many of the songs from “The River,” and when he rarely stopped to talk, it provided interesting context. He kept the record moving — although there was plenty of time for the E Street Band to deliver their trademark solos — and the show was all the better for it. Veterans to the core, they made the record sound different and expansive live, without being wasteful. And, most importantly in terms of being able to execute the sort of big ideas that he has, even though it sounds cliché and something that might be lazy for a music journalist to write, he still seems happy to be there, delivering the songs night after night.

A couple songs after my favorite track from the second disc, “Cadillac Ranch” — which I actually heard Warren Zevon cover before I found out it originated on “The River” — I left my seat to wander around, to do some people watching, and pop in and out of different sections to watch from the railing. Even in the soft spots of that second disc, people were attentive — dancing and mesmerized and sporadically screaming … although at a much different pitch than the one present at the Taylor Swift concert, which still causes sonic flashbacks. As “The River” came to a close and Bruce was preparing to run through a large chunk of hits and a few deeper cuts, I had to take off, which made me feel a little guilty when I woke up Monday morning, but I don’t anymore. Sure, I missed some of my favorite songs by Springsteen, but being drawn deeper into “The River” completely changed how I perceive that record, which seems like a victory, even if it was a delayed one.