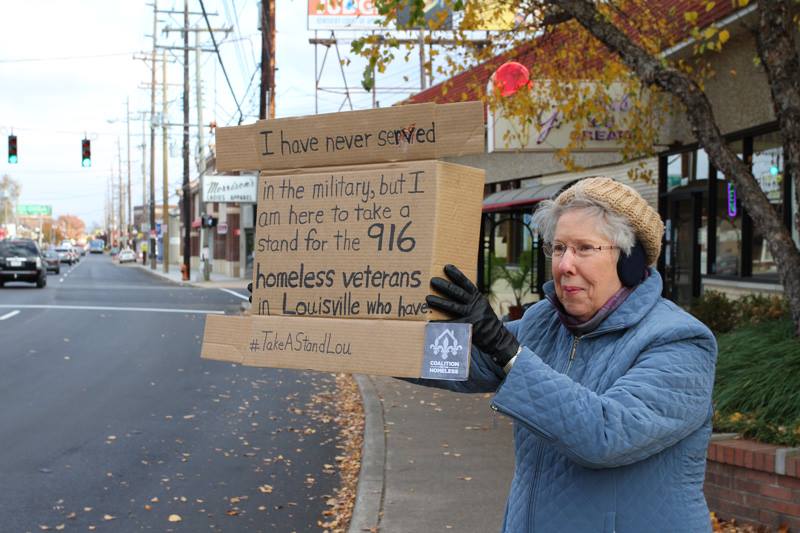 The Coalition for the Homeless is asking everyone to take part in #TakeAStandLou this Thursday (Feb. 18) at 4:30 p.m. It’s a city-wide campaign to raise awareness about Louisville’s homeless and get people involved in solving the problem.

Natalie Harris, executive director of the Coalition for the Homeless, said that many in our community think of the homeless in a stereotypical way, as someone in ragged clothing standing on the corner panhandling for beer money, which couldn’t be farther from the truth.

“Ninety percent of the homeless population in Louisville are single-parent families or young people who just aren’t making enough to pay their rent,” said Harris. “And people think that they don’t interact with the homeless on a regular basis, but there are families at your kids school who are living out of their car, and there are people serving you at McDonalds that have to clean up in the bathroom before they go to work.”

To make people aware of the true face of homelessness in Louisville, the Coalition for the Homeless came up with #TakeAStandLou.

“The goal is to get people talking about this issue in our community,” said Harris. “But we also need people to take that next step and volunteer some of their time at a homeless shelter, or call their Metro Council member and ask them to fund the Affordable Housing Trust Fund. If we can get people to do that, we’re going to see a really positive impact.”

To take part in #TakeAStandLou, write a message supporting Louisville’s homeless on a cardboard sign and post a picture of yourself with it to Instagram, Twitter or Facebook with the hashtag #TakeAStandLou. People are also encouraged to stand with their sign outside for 30-40 mins. to help spread awareness to those not on social media.

To find out where people are gathering for this city-wide event, what to write on your sign or how to take the next step in getting involved visit the Coalition for the Homeless website.