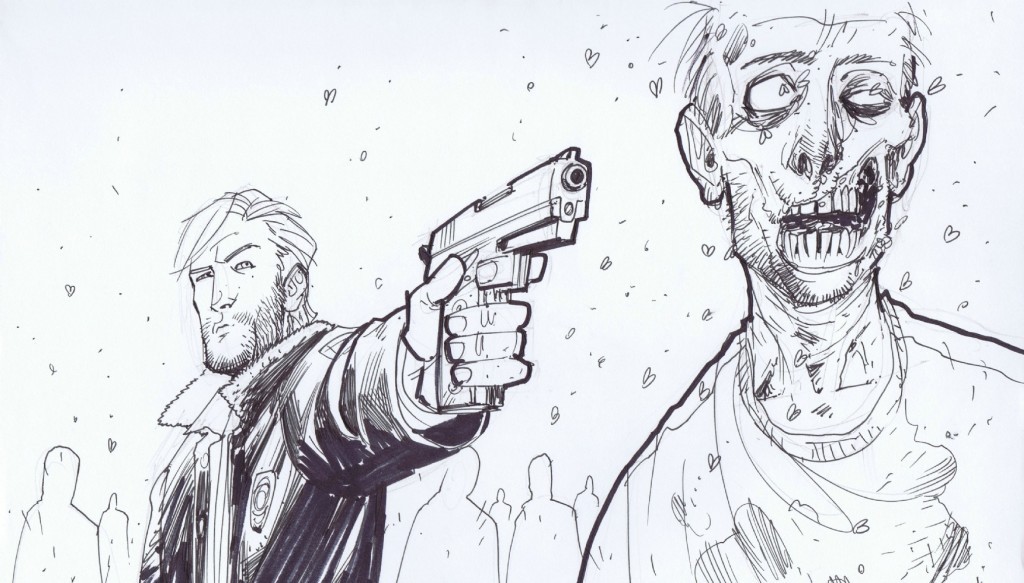 Whether you realize it or not, you have probably seen the name Tony Moore, especially during the late fall and early winter each year. As the co-creator of the The Walking Dead comic, Moore’s work has reached an audience larger than the former Kentuckian may have ever imagined. He spoke with an easy charm, the sort that definitely comes from the South, but that is as informed by comics as it is punk rock. You can see that in his art, which has a cartoonish quality that offsets the otherwise bleak settings that his characters find themselves part of.

Of course, as with the characters in The Walking Dead, the nigh-indestructible Deadpool, or his work on The Punisher, which saw the pop culture figure mutilated and reconstructed à la Frankenstein, Moore can relate to being surrounded by weirdness. Growing up on a dairy farm he recalls, “There was a lot of solitude. The only other kid around was my brother, and I just wanted to punch him most of the time. That solitude led me to escapism. Things that most people find scary, like dilapidated houses and dead animals … that was just life for me. I find it oddly comforting. It’s not necessarily lonely to be alone. I think that rural grit is in my work. I can’t do like slick, pretty, futuristic stuff. Everything I draw looks like it was dug up on the back 40 of a farm.”

It wasn’t always that way. Moore’s earliest work was with creator Robert Kirkman, another Lexington native, and future zombie collaborator, where the two self-produced the comic Battle Pope, which eventually got picked up by Image Comics. Of his evolution as an artist, Moore says, “I think I’ve slowly found my voice. As a younger artist, there were a lot of things that I wanted to do, or that I thought I wanted to do. As I got older, I started to realize that wasn’t what I really wanted. I slowly found my voice and found what I really want.”

Of a seminal career experience he had with Jack Davis, an artist from Mad Magazine, Moore says, “One of the turning points for me was when I was on the phone with Davis, commissioning him for Fear Agent. I was being an a-hole and trying to direct him, and he said, ‘I just wanted to have some fun … I’m 82.’ I was, at the time, trying to make things gritty and real and realistic, and I thought that was the direction I should be going, but I was basically fighting my own instincts all along. I learned to embrace what I do. Once I did that I felt a bit more free.”

Moore’s most recent endeavor is a signing tour, which he likens to a rock and roll tour, one which is comparably easier to work around with his six-year-old daughter in tow. You can catch him at signing this Thursday at The Destination.