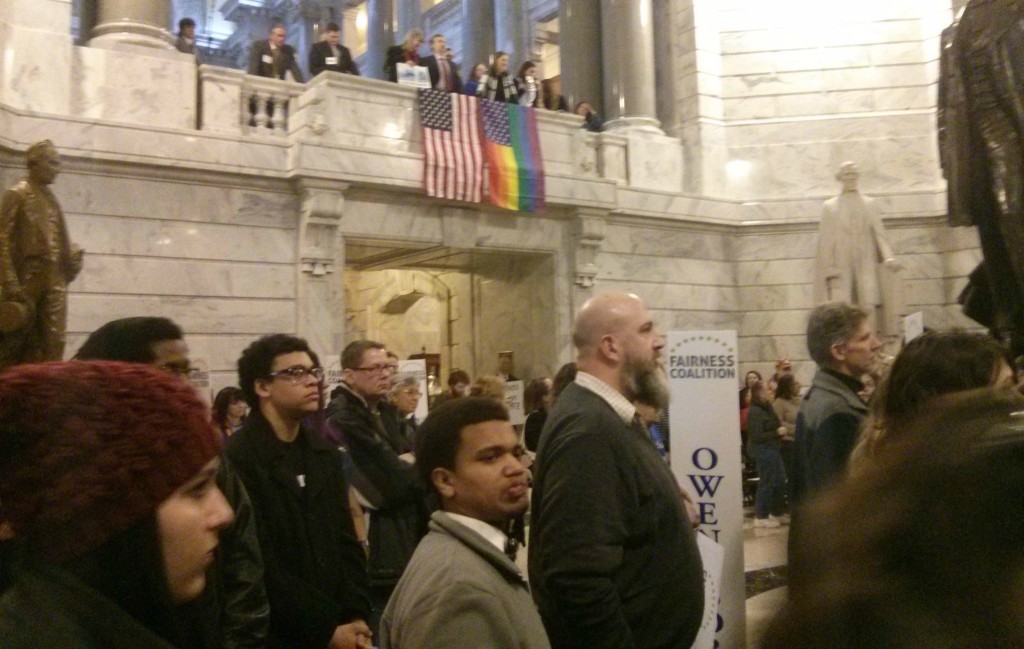 In most of Kentucky it is still legal to deny someone a job, a place to live or entrance into a restaurant simply for thinking that someone is gay or transgender.

“It’s been centuries that we’ve been fighting, centuries we’ve been debating, on why we should be accepted by the community and not discriminated against,” said Ciel Bates. “We shouldn’t have to be fired, or not accepted just because of our sexuality.”

Bates is from Louisville, one of eight cities in Kentucky which have local fairness laws, but felt it was important to come out and show support for those still living in fear.

“In some ways I feel like i’m here to represent people who are still in the closet, because their parents might hate gay people, who don’t feel like it’s safe to come out for this,” said Bates.

Gary Adams is from Owensboro, a place with no fairness protections. He said many lawmakers will say that there is no evidence of discrimination and so there is no reason to pass Senate Bills 176 and  House Bill 155. But Adams said they are just looking for an excuse to turn a blind eye to the issue.

“No one is going to come out and claim they’ve been discriminated against when, by law, nothing can be done about it. Why take their chances?” said Adams. “In Kentucky, everyone wants to go along and get along, nobody wants to be too confrontational. But this has been a long time coming, and our our civil rights laws should extend to everyone.”

Adams said he doubts that Senate Bill 176 and House Bill 155 will pass this year, but he sees hope in the newly-founded Kentucky Competitive Workforce Coalition, a coalition dedicated to passing fairness laws in Kentucky not only because it’s the right thing to do, but because it will be good for business as well.

The coalition has already gathered more than 200 signatures, from business like Ford and Anheuser-Busch that support enacting fairness laws. Adams said he hopes that the money and influence of those business will help speed up the process.

“The chances of the fairness ordinance passing this year are about three percent,” said Adams. “But it’s growing and this is not an overnight thing, we just have to stay persistent. Keep the faith, march on.”

And tell them that you support Senate Bills 176 and House Bill 155.