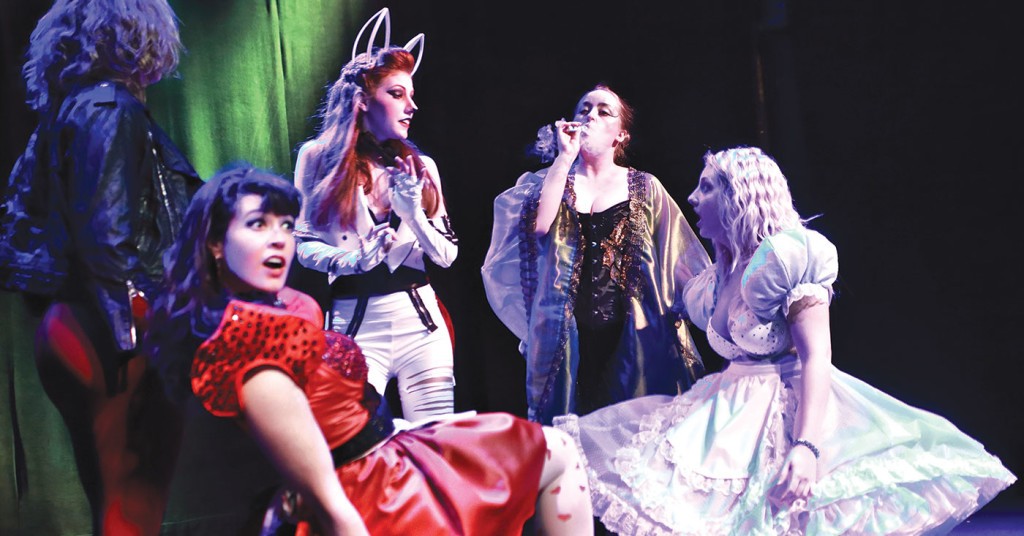 Nothing but smiles fill Art Sanctuary as the final rehearsal for “Va Va Vunderland” commences before opening night at Headliners in two day’s time.

“Va Va Vunderland” is the title of this year’s Va Va Vixen’s annual Valentine’s show, which has become a beloved Louisville tradition over the years. And with tradition comes a great deal of responsibility, a responsibility which Lisa Frye and her Vixens have come to take seriously. “We really just want to continue to raise the bar,” Frye explains. “Our goal is to have our fans walk away feeling as if we have outdone ourselves. Through this, we hope to inspire others to do the same.” Frye is a renaissance woman, who I would imagine rarely finds time to sleep. She is not only the mastermind behind this tour de force of local talent, but also president of Art Sanctuary and an extremely talented local artist in her own right.

The seriousness with which the Vixens take the show is proven by the months and months of hard work The LEO’s Choice Favorite Theater Troupe takes to make each production happen. “They are all equally as intense to create,” Frye promises. “We do three shows a year: February, June and October. It takes every bit of four months to create each one. We believe that our Valentine’s show is the most popular because our shows are a great way to celebrate that holiday. However, our shows are just as entertaining any time of year!” Each show requires writing, choreographing, promoting and designing — designing of costumes, make-up, and sets. And, of course, no Vixens show happens without lots and lots (let me say it again) and lots of rehearsal.

This time around in the season of love and lust, the Vixens are aiming Cupid’s arrow at Lewis Carroll’s classic fantasy story “Alice in Wonderland,” but doing it Vixens style. It is not a re-telling of Carroll’s story but rather an endlessly creative and delectably warped interpretation, which incorporates many of the author’s most beloved characters.

It’s hard to write this article for LEO’s love and lust issue without looking at the roles of both love and lust within the story the Vixens are telling in “Va Va Vunderland.” And to do that, let’s define what love and lust mean to those that are creating the show, starting with Frye: “To me, lust is very intense and can be extinguished as quickly as it arrived, much like the lighting of a match. Love is much more complex as it involves loyalty, trust, patience, communication and dedication, as well as passion.”

“Love is about accepting people for who they are,” Vixen Tabitha Johnson contends. “Overlooking their weaknesses, balancing […] overall, love makes you a better person, the person you always wanted to be, and you’re doing the same for the one you love.”

While Vixen Lee Anne Cooper sees it more pragmatically: “Lust is just animalistic. Love means you will clean up their puke.”

And so where do all of these unique perspectives fit into “Va Va Vunderland”? Well, the Vixens have just as many different views on that, as well. Vixen Deanna Gillispie doesn’t think the show portrays love at all. She explains, “There is a lot of symbolism in ‘Alice in Wonderland’ that refers to drugs and to sex. There is a lot of lust in the story because it is ridden with sexual undercurrent (growing and shrinking, deflowering, eat me, drink me, domination, et cetera), [but] I do not see it as a love story at all.”

While Frye sees love in a broader sense when it comes to the Vixens. “I think we are playing with these concepts in all of our shows. We have done numbers that were about lust, certainly. We have also done entire shows about different kinds of love. This particular show displays love among the Jub Jub Bird and the White Rose Guard. It also depicts the bond between sisters.”

As rehearsal begins everyone seems in good spirits, but not oblivious to the fact that opening night looms over this rehearsal. Individuals and ensembles are spread throughout Art Sanctuary, preparing for this final run-through. Costumes are scattered about in some form of organized chaos. People are rubbing each other down in an attempt to loosen up muscles and prevent cramps during the extremely physical rehearsal, while others quietly prepare in their own minds by pacing or eating Chinese takeout or sipping on coffee and energy drinks (some of the performers have been up since 6 a.m. for an appearance on “Great Day Live”). It’s a gentle, smiling form of chaos.

“When we get together, it can be a lot of energy, especially if we were are very close to a show (opening),” Frye says of the rigorous and chaotic rehearsals. “We make our own costumes, as well as create the look of each character, [we] also have actors rehearsing, sound checks for singers, and any number of styles of choreography happening all at once, it can seem chaotic, but, it just adds to the collaboration. We all know each other really well and that adds to how special our creations are. Everything we do is made with passion and dedication.”

The costumes in a Vixens show are often equally as elaborate and beautiful as the choreography, or the singing, or the acrobatics, or the stripteases that take place on stage. “Sometimes, they actually take my breath away, Frye says, in literal awe of those who help assemble the Vixens’ stage outfits. “The costumers continue to outdo themselves over and over, and this show is no exception. It will be more beautiful and intricate than any show we have done so far. They are incredible!” The costumes for “Va Va Vunderland” were designed and created by Lee Ann Cooper, Deb Foster (Give and Take Designs), Carrie Foster, Victoria Baumgarten, Tabitha Johnson, Jenna Bain, Jamie Thomas, Stephanie Braun and numerous others. And at this point in the rehearsal process they are making last minute adjustments, stray threads are being burned off with cigarette lighters, loose ruffles or flowers or hearts get double stitched to the bras and bustiers they’re intended to adorn.

“It is one thing to get together to do a show,” Frye says in reverence to the Va Va Vixen family she has culled. “But to work tirelessly show after show and still come up with fresh and creative ideas is masterful. I am so fortunate to be able to work with these imaginative, strong, talented and dedicated artists. They truly impress me in every way.”