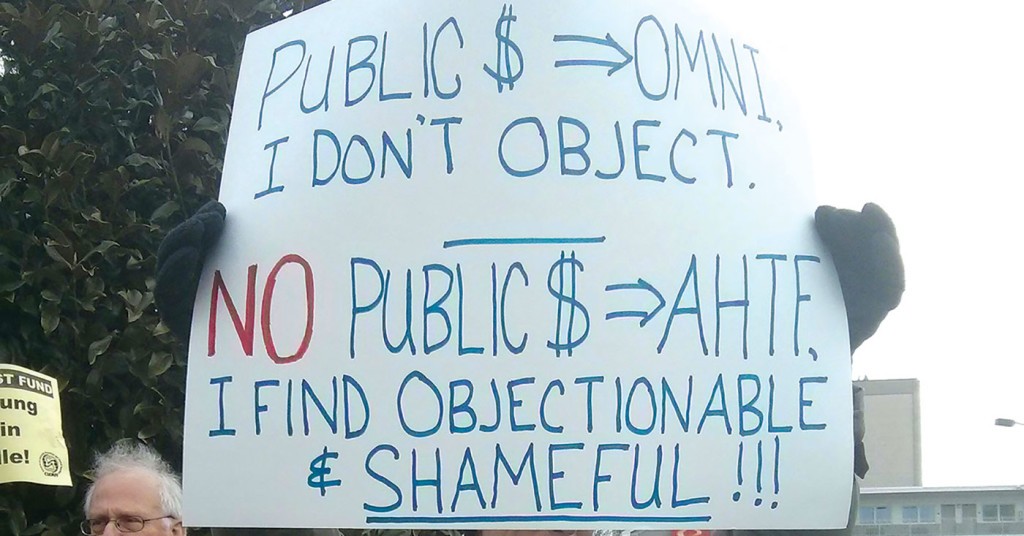 With the thrust of a spotless, silver shovel into a pile of dirt, Mayor Greg Fischer broke ground on construction of the luxurious Omni Hotel. Across the street activists gathered in the cold to ask Mayor Fischer why he only pays attention to Louisvillians with fat wallets.

“Only certain people are benefiting from the investment in housing that’s going on downtown, while those who need it most are being left out,” said Beverly Duncan. “Metro Council established an Affordable Housing Trust Fund eight years ago, and, in eight years, it’s only received 1.5 million in funding, while 17 million is going towards building this luxury hotel’s parking garage.”

Beverly Duncan, co-president of CLOUT (Citizens of Louisville Organized and Unified Together), said that their organization is asking that Mayor Fischer focus some of his attention on Louisville’s less wealthy population and fund the Louisville Affordable Housing Trust Fund.

The fund was created in 2008 by Metro Council to address the lack of affordable housing in Louisville for working families, seniors, homeless veterans, people with disabilities and young professionals, but the fund has gone largely unfunded for the better part of a decade.

Omni Hotels & Resorts (the company behind the project) will be paying 52 percent of the project’s development costs, but 48 percent will be covered by the state and city in the form of tax incentives and tax rebates totaling $139 million.

But Duncan said based on the findings of an independent study by the University of Louisville’s Urban Studies Institute, Louisville would have seen a better return on their investment if they had funded the trust fund. According to the study an investment of $10 million annually in the trust fund would generate an estimated $42.5 million in economic activity over the next five years.

The funding of the Affordable Housing Trust Fund could also improve Louisville’s ability to retain and attract millennials, people like Rev. Jessa Warner. After graduating Louisville Presbyterian Seminary, Warner began working as a social worker for Jeff Street Baptist Community at Liberty helping homeless veterans to find housing, while she struggled to find affordable housing herself.

“The only place I could find that was affordable was completely ill maintained, and I spent the first six months dealing with holes in the walls, leaky sinks, messed up floors and cockroaches,” said Warner. “And Germantown is my neighborhood, which you usually think of as a good neighborhood but there are four abandoned houses within a block of my house, and on warmer nights I find people sleeping in cars all around my neighborhood.”

Warner said that she and others are spending 50 to 60 percent of their income on housing, leaving little to no money for emergencies or other necessities, which can make it difficult for young people to start their lives here in Louisville.

“Mayor Fischer said before that funding the trust fund was a priority of his,” said Warner. “Well, we just want him to do what he said he would do. That’s why we elected him.”

Activists gather to help everyone lobby for a better Kentucky

Louisville activists gathered on Monday (Jan. 25) at the First Unitarian Church to educate local residents on the most effective ways to lobby their representatives during this year’s legislative session, saying that if citizens don’t speak up, others will speak for them.

“Big corporations spend a lot of money to influence lawmakers, and they have people whose only jobs are to lobby,” said a member of The Homeless & Housing Coalition of Kentucky. “But you have to remember when talking with legislators that you are their boss, and when we get into coalitions like this it can be a powerful force.”

Each group took turns addressing the “DOs and DON’Ts” of lobbying.

DO: Tell a personal story, research the issue, stay calm and collected, work to educate lawmakers, ask directly for their support and always thank them for their response.

DON’T: Make stuff up, threaten them, be disrespectful, get discouraged or assume lawmakers know everything about every bill.

The activist groups also said that despite your best efforts, some lawmakers will disagree with you and likely respond by deflecting the issue, delaying their response, denying there is a problem, attempt to deceive you, divide your lobbying power as a collective, discredit your ideas or just flat out discount your opinion.

“A lot of us here probably don’t agree with most of what our representatives Rand Paul and Mitch McConnell say,” said a member of Kentuckians for the Commonwealth. “But you can find some common ground with them, and I know it can be frustrating when you’re passionate about something and others don’t share your passion. But if you’ve done your research, you can focus on educating lawmakers and not arguing with them.”

To get involved contact one of the groups listed and ask how you can help lobby for a better Kentucky.