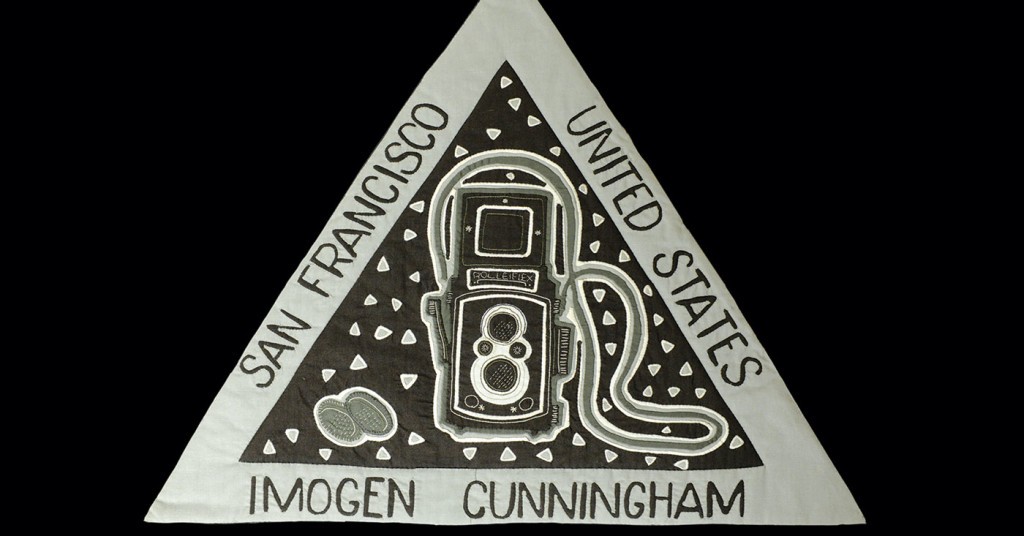 Feminists of all ilk are familiar with Judy Chicago’s trail-blazing art. Since the 1970s, Chicago has been an internationally known feminist icon, most famous for “The Dinner Party.”

The triangle-shaped table (fashioned after “an early symbol of the female,” she explains) features 1,038 names of women who have contributed to the history of the arts, history and sciences. It traveled around the world from 1979-96 (it’s now permanantly at the Brooklyn Museum). But it was not alone. Because Chicago was constantly being asked why certain women were not part of “The Dinner Party,” she sent out a call for small quilts honoring women. Thus a companion art project, the “International Honor Quilt,” was born. This one-two punch celebrating women’s accomplishments were displayed together worldwide.

Chicago and her nonprofit art organization Through the Flower recently donated the “International Honor Quilt” (IHQ) to the University of Louisville (see “Quilt of Many Stories” May 28, 2014, LEO Weekly). She has a number of Louisville connections, most notably with Shelly Zegart, quilt expert and founder of the Kentucky Quilt Project Inc.

UofL has big plans for the IHQ, especially “as an agent to demonstrate the power of art to shape society.” Its home is within the Hite Art Institute. Research is a major focus, with an online database of the individual pieces and its creators already established (uofl.me/intl-honor-quilt).

“This is a wonderful opportunity for the public to … learn about our plans to use it as a tool for collaboration, education and dialogue around women’s issues and history,” says Margaret Leininger, director of the International Honor Quilt Project.

Meanwhile, the entire quilt is on display in the Schneider Hall Galleries in the exhibition “Capturing Women’s History: Quilts, Activism and Storytelling.”

The IHQ is a series of 539 quilted triangles. Each two-foot panel was created individually and can be shown alone or as a group. Subjects include artists such as photographer Imogen Cunningham and painter Frida Kahlo, women’s organizations like the League of Women Voters, and beloved female figures in the life of the quilters. Supporting materials, including the names of the creators, are also on display, adding to the visual stories told by the triangular pieces of cloth.

The ”Hot Flash Fan,” another Louisville-Judy Chicago connection, has its own room in the exhibition. It’s both serious and humorous as it explores the truths and myths of menopause. Originated by Louisvillian Ann Stewart Anderson in 1985, Chicago worked alongside 52 Kentucky artists to create the 8 feet by 16 feet mixed-media quilt. It is on loan from the Kentucky Foundation for Women.

Although associated with Judy Chicago, the “International Honor Quilt” is not by her, and she is just one of many who worked on the “Hot Flash Fan.” To see art solely by her, head over to the IHQ’s companion show, “Judy Chicago: Fire Works” at UofL’s Cressman Center for Visual Arts.

The exhibition focuses primarily on her work in glass and pyrotechnics, areas of her career that are little known. Curator Chris Reitz says the show is “an update on Judy’s practice.” While the media are different, the female-centric message remains the same.

Chicago began working with stained glass while she was creating “The Holocaust Project” in the early 1990s. “Judy Chicago: Fire Works” features five pieces of cast and painted glass from the series “The Toby Heads” and “Hands.” Also on display are a number of her prints from 2009-13, all owned by the Hite Art Institute.

A 12-minute video shows Chicago working on pyrotechnic performance pieces. It features three events from 2012, including “A Butterfly for Pomona,” which was commissioned by the Pomona College Art Museum in Clarmont, California. It was the first fireworks display Chicago had created since 1974.