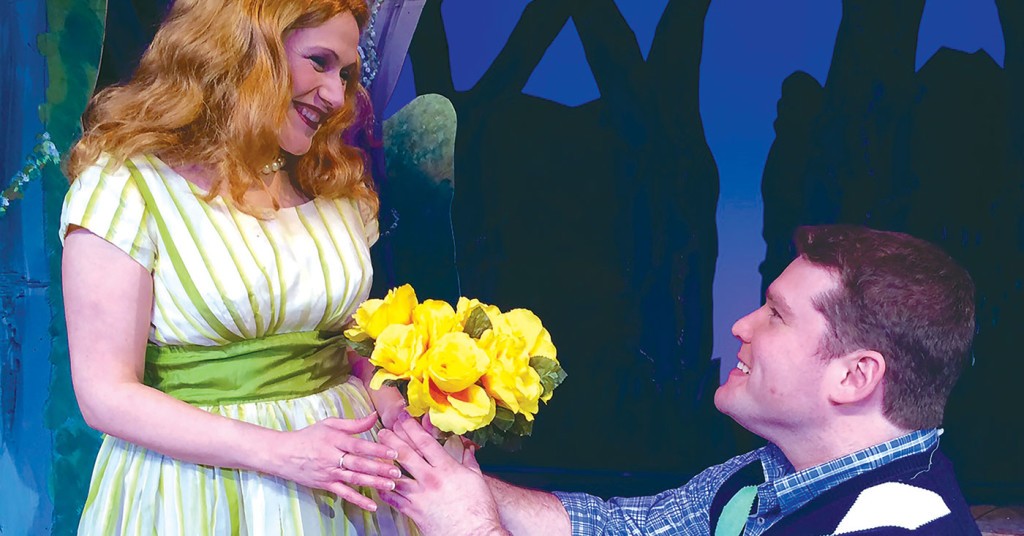 It starts with a whopper, of course, the musical version of Daniel Wallace’s novel, “Big Fish.” And it’s a whopper that captures the essence of the story and its main characters. The scene is a riverbank in Alabama, where Edward Bloom, a teller of tall tales, is reminding his son, Will, of a whopper caught long ago. Will objects that his dad is exaggerating the size of the catch, and in a flash we’re swept into fantasy where Edward comes to the assistance of a hungry fisherman by teaching him a dance called the “Alabama Stomp.” It’s a step so beguiling that fish can’t help leaping instantly into a fisherman’s net. And that’s exactly what happens.

It’s a moment that expresses Edward’s zest for life, his generosity of spirit, and the uplifting power of the stories he crafts.  It’s also a moment that highlights the wit, ingenuity and craftsmanship of this colorfully extravagant production, with scenic design by Michael F. Hottois, an orchestra led by Angie Renae Hopperton, lights by Theresa Bagan, and sound by Bernie S. Abner. CenterStage at the Jewish Community Center is certainly not new to producing gorgeous-looking musicals, but this production, which finds its heroes traversing landscapes as varied as a dark, spooky forest, an echoing cavern, a Western cowtown, a circus and a war-torn battlefield — to name a few — is itself a whopper.

And Director John R. Leffert and his cast have captured the essence of these characters, who originated in Daniel Wallace’s novel, were previously portrayed in a film and were brought to the stage with a book by John August with music and lyrics by Andrew Lippa.

If the sets are all over the place, the score is mostly (but not completely) rooted in modern country, and the stage is packed with vocal talent — and it’s mostly through song that this story is told.

Edward, played with wit, energy and an innocent, appealing confidence by Pete Lay, may have spent much of his life on the road, but there’s no question his heart has been with his family, his cheerfully tolerant wife Sandra (Melissa Kenney Shepherd) and his son Will (Mitch Donahue), who, as a child, was smitten by the stories, but as a grown man has become his father’s temperamental opposite — a paragon of realism and common sense.

As the story opens, Will is getting ready to marry Josephine (Margo Wooldridge) and the fault lines between father and son emerge when Will asks his father not to tell any of his tall tales (or even raise a toast) at the wedding reception. It’s a request that befuddles and hurts Edward — and when he breaches the promise (in a most embarrassing way), the father-son tension ratchets up.

In the real-time world of the play, that tension is compounded by the quick discovery that Edward has cancer. And as Will tries to untangle the authentic nature of his father — as opposed to the heroic figure of the tall tales — we spin back and forth from real time to story  time.

And these stories (many of which are told to the young Will, played by the charming Clark Worden) are delightful: a spooky encounter with a fortune-telling witch (Jessica Adamson) and her coven; a trip back in time to Edward’s youth, when he was a big fish (and “favorite son”) in his home town; a fantastic tale of the time Edward prevailed over a terrifying giant (Frank Goodloe III, in a truly towering performance), not with force, but with compassion; a stint as a roustabout at a circus run by a werewolf named Amos (Jason Cooper), and a romantic tale of how Edward won Sandra away from his arch rival (Isaiah Hein).

Against the backdrop of these tales — which feature brisk, varied choreography by Frank Goodloe II — Will suspects that their intent is to conceal a hidden truth about his father, perhaps something sinister. And though his wife, Josephine, argues that in fact they reveal the true Edward, Will tunnels until he finds some disturbing news — which leads him back to Edward’s hometown (of which Edward never speaks) and his first girlfriend, Jenny Hill (Jennifer Poliskie), where he discovers a strange and untold story — and learns to tap into his river of story.