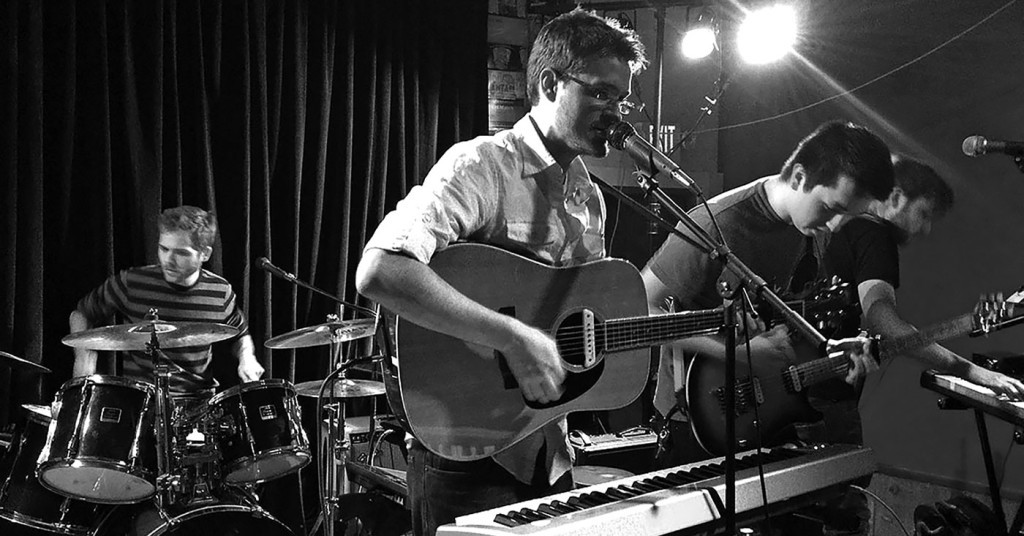 There is a kind of malaise that informs the art that emerges from the suburbs, usually manifested by loud guitars and angst-ridden lyrics, thrown up against a crashing backbeat. Nestled in the heart of the South End, Kaleidico bucks that tradition, if only in terms of their volume and force of character, albeit still with what can only be deemed as a burning drive to bring their art to life. The vehicle for multi-instrumentalist Matt Moore, the band has a quiet calm to their music that belies a fire for creativity often crushed by the dual natures of economic necessity and adult responsibility.

There is a spartan nature to their setup. The unfinished basement that they practice in is laid bare of most necessities, a reflection of the band’s approach to music. A three-piece, the band has spent the last year reconfiguring their compositions in the wake of their former bassist moving on to a different project. Every instrument has its place and every sound is accounted for in the overall sonic tapestry, creating an economy of language that forces them into a creative means of bringing their songs to life.

“When we worked up ‘Zoetic,’ we worked up what we could play and how we would even play it,” Moore says. “It took like a week to work up. We always start with the hardest [composition]. We never cop out at the beginning.”

Of their compositional process, Moore explains, “As far as the songwriting goes, thinking about atmosphere and medium, that’s what makes Kaleidico interesting — we’re never thinking about a medium, we’re only thinking about sound. I remember when I was first forming a band, I was always trying to figure out how it would fit. Then I threw all that out the window. And that’s what makes it so fun. It wasn’t meant to be on any instrument, you just have to take it for what it is and force it into what we have available for you. They were never intended to be played live. There was never any thought about how will other people play this part. I like that. That’s what keeps music free.”

Chodyniecki agrees, adding, “Even now we’ve switched it. The more we play out, we’re always trying to think of ways to condense, so that it doesn’t seem like we’re just pushing buttons and stuff. A lot of my favorite bands — the writing is by one person. My favorite thing about Kaleidico is that you can hear the skeleton of the song. All the melodies seem so purposeful. Like complete skeletons of just a melody or a chord progression. At that point, it almost is done and you’re just sprinkling on top until you have enough sprinkles.”

For all involved, this is their first band. For many, that manifests itself into a scattershot approach to all aspects of music, but the constituency of Kaleidico has channeled all of that optimistic sense of exploration into a very deliberate and thoroughly-crafted whole. Everything is in the right place.

Even with a scant two releases under their belt, you can hear an evolution over such a short period of time, and that too is deliberate. The band is set to release an EP this week — ‘‘Zoetic B-Sides” — as much to fill in those gaps in their sonic narrative as to offer something to fans while they carefully orchestrate their next album.

Of course, any b-side collection begs the question as to why those tracks didn’t make the cut originally.

“Not everything you make is gold,” Grulke says. “Some of the songs have a lot of acoustic elements. If you’re listening to the b-sides from a fan perspective — and we’re huge fans — if you listen to it with the thought in mind that it’s the transition between ‘Free Falling Waltz’ to the more electronic ‘Zoetic,’ then it starts to lose the more pop elements and move into the electronic sections.”

“A lot of the songs are kind of set in between the first and second albums,” Moore adds. “When the sound of ‘Zoetic’ was forming, these were a lot of those pioneer songs. That’s not true for all of them. They just didn’t fit sonically. It just wasn’t needed. When you get to the end process, you just have to choose your babies.”

Still, Moore believes that b-side or not, they cohere into a pleasing whole: “They’re treated like a mini-album. For the most part they flow together. With it coming out so late after ‘Zoetic,’ it’s just to give somebody something to listen to. Some of this stuff is before ‘Zoetic’ and it’s really really old. It may be the only thing we put out this
year.”