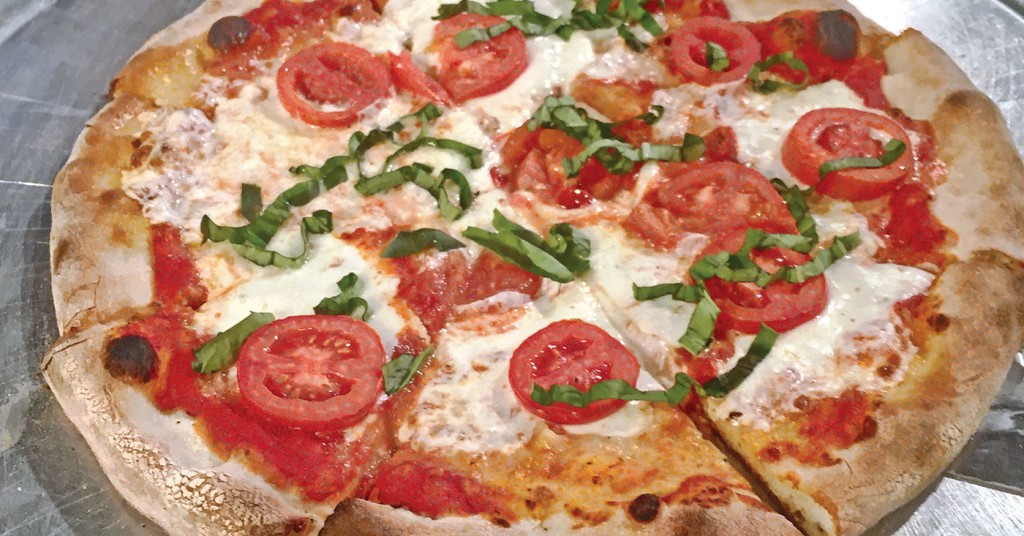 Some days I want to eat something healthy. Some days, not so much.

That’s why I’m glad that there is room in the world for places like North End Slice, where the bill of fare is all pizza, all the time; and places like Half Peach Bakery & Cafe, where there is nary a speck of meat or even any animal-based products like eggs or cheese on the premises.

Now, this is not to say that pizza is necessarily unhealthy. I have often touted it as one of nature’s most perfect foods. Nevertheless, we’re talking carbs here. Carbs, and a load of delicious gooey, melting cheese.

By the same token, one shouldn’t assume that “vegan” is necessarily “healthy.” Even pure, sweet veggies ramp up the risk factor a bit when they’re slathered in, say, succulent olive oil.

I’m just happy to have both of these recent arrivals offering a choice.

North End Slice popped up in a long, narrow space that had formerly served as a private dining room in North End Cafe’s Douglass Loop branch.

We dropped in for a pizza treat one chilly evening last month. (With only a couple of dozen seats in a spartan room, it seems designed primarily for take-out, but you can eat in, and we did.)

The first thing I saw was reassuring: A couple of serious-looking guys working in tight quarters behind the counter were slinging a large tray full of beautifully risen pizza rounds, sitting up like mini-blimps awaiting shaping, topping and searing.

Serious pizza hands know that dough is  the secret to great pizza — all the rest is commentary — and you could tell by looking (and, later, tasting) that these guys know their pizza bread.

Of course, as the name implies, you can get a slice for $3, two for $5, or a little more if there’s a special on sale. It looks like a New York City pizzeria, but doesn’t work quite the same way — you can’t take a plain cheese slice and have the toppings of your choice added — so we passed on the two available slice options and went with a 14-inch pie instead.

We chose a favorite — the classic Margherita array of mozzarella, tomatoes and basil — and it was pretty good, once we got over the sticker shock of paying the same price ($19.95) for a small pie as they charge for the meat-lover’s pie with five, count ‘em, five different meats and sausages. (That’s because the margherita uses pricey fresh mozzarella, owner Chris Seckmann later said via email. Fair enough.)

The pizza was pretty good. Unlike the larger by-the-slice servings, a wedge from the small pie doesn’t fold well (and doesn’t need to be consumed in that Gothamesque fashion). The crust, as mentioned, is good, thin, with a crisp but pleasantly chewy edge bearing taste browned char marks from the oven. Tomato sauce, applied judiciously, is good, with a complex tangy flavor and hint of peppery heat. A couple of thick-sliced plum tomatoes (a good choice in winter) and basil chiffonade join rounds of gooey, stretchy mozz’ to complete the project.

The pizza and a couple of fountain drinks (actually, a diet cola from the fountain and a fresh iced tea helpfully brought over from the restaurant next door) came to $26.13, plus a $5 tip. •

Half Peach launched softly last month and now serves lunch Tuesdays through Saturdays. The owners aren’t strangers to the vegan and fresh-stuff community, having sold fresh prepared food at farmers’ markets and Rainbow Blossom for years. In addition to being fully vegan, they also promise fresh, local, natural and home-grown fare.

The menu changes according to what’s available, but the dishes we tried were representative:

Briefly told, it was all good enough to make me want to try more, but showing signs or careless or inexperienced preparation. The quiche — a bit of a tour-de-force in a vegan setting that forbids cream, cheese or eggs — was soft and somewhat bland. The dumplings had potential but seemed to have been reheated in a microwave, yielding tough, chewy dough around flavorful veggie innards. The bean “sausage” bits did a good job on flavor but lacked texture; and the salad roll was healthy but fell apart in hand, and really needed some spicy peanut sauce borrowed from the dumpling order to kick up their flavor.