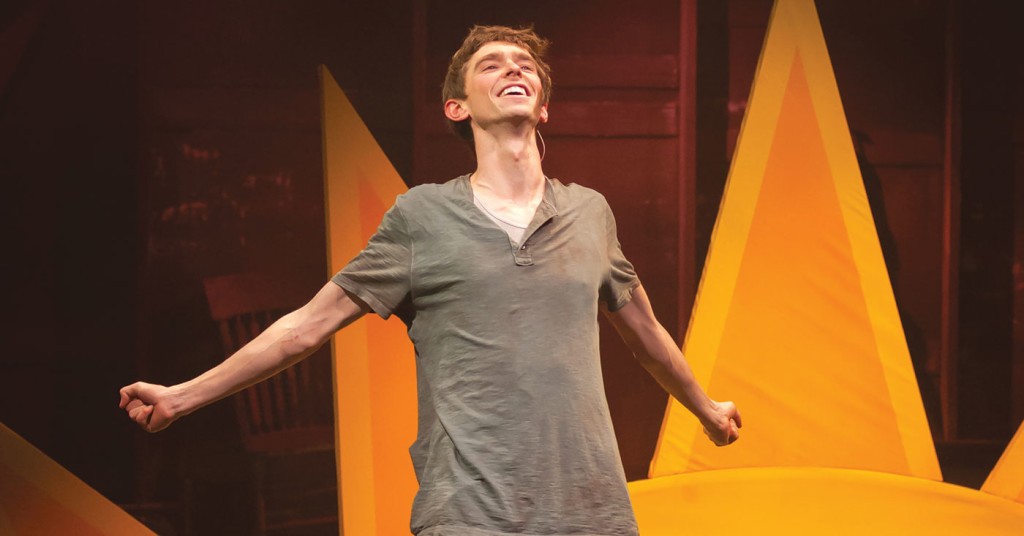 “Peter and the Starcatcher” is a 2009 play by Rick Elice (with a musical score by Wayne Barker), adapted from a novel by Dave Barry and Ridley Pearson that invents a backstory for J.M. Barrie’s paragon of perpetual youth, Peter Pan.

That’s a painfully long sentence — but in the fantastic Actors Theatre of Louisville production that opened last weekend, we’re whisked through an entire suite of backstories in the twinkle of an eye. In what seems like an instant, we meet folks like the polar explorer Robert Falcon Scott (Nathan Dame), the eminent Lord Aster (Richard Prioleau) and his whip-smart, star-gazing daughter Molly (Therese Barbato). We meet a trio of “lost boys” whose resilient energy is unstifled by the abuses they suffer. We glimpse  whiffs of comic corruption in the wheedling ways of a crew of highly suspect sailors. And quicker than a sailor’s salute, we’re sailing away on a madcap nautical adventure that centers around a secret mission, a couple of treasure chests and a tangled skein of plot twists. And underlying all the delicious verbal wit and fearless physical comedy, there’s a sweet tale of idealistic quests, of people looking for heroes, yearning for friends and finding ways to balance liberty and loyalty, freedom and service.

Meredith McDonough directs this production, and it spins like a top.

Sometimes it explodes with unfettered glee, as when we meet Black Stache (Nathan Keepers), the pirate leader (described as a “nancy” by some members of his crew) and his second in command Smee (Nehal Joshi) or, later, when we’re introduced to an exotic group of island natives, called the Mollusks, led by Fighting Prawn (Paul Whitty) whose hatred for all things English is such that he plans to feed the lost boys to his giant crocodile, Mr. Grin.

Other times, the scenic design (William Boles), lights (Paul Toben) and sound (Lindsay Jones) take us into dark and gloomy spaces (one piece of virtuosic staging finds actors using ropes to frame Molly as she crawls on a quest that takes her through the complex innards of the ship) or uses simple devices like a mere string of lights to infuse a scene with luminous rapture.

The witty costumes, by Kathleen Geldard, are as witty as the text (consider the pasta bandoliers worn by Fighting Prawn in a scene where he leads his assistant Hawking Clam (Ben Pelteson) and the Mollusks in a rousing anthem celebrating Italian cuisine. Or the opening of Act II, a droll nightclub production number featuring a school of fish that have been magically transformed into dancing mermaids, clad in a rainbow of shiny colors, and choreographed by Sam Pinkleton.

This is spectacle of a high order. But the script and acting are also of a high order. Seth Clayton (as the boy who will eventually earn the name Peter Pan) and Therese Barbato as Molly, the lass who will take the lost boys under her wings, and teach them the comfort and power of a simple bedtime story, are a marvelous couple, at once tender and tendentious, curious and frightened, and each brings a coltish physical innocence to their crucial roles. As Peter’s companions, Ted and Prentiss, Ari Shapiro and Madison Niederhauser have plenty of comic chops, as well.

But comic chops are everywhere in this production. Rob Tucker delivers long strings of alliterated text with flawless precision as Molly’s nanny, Mrs. Bumbrake; and Andy Gaukel is charmingly stalwart as her unlikely admirer, Alf.

As Molly’s father, Lord Aster, Prioleau is a bulwark of English values — and in a couple of scenes we learn, to comic effect, that both he and Molly are masters of a little-known dead language: both speak Dodo. Nathan Dame — who also directs the music in this production — offers an amusing take on Robert Scott.

The juiciest roles, not surprisingly, are villainous. Chief among them is the pirate, Black Stache, played with risky physicality by Nathan Keepers — whose performance reaches a climax when we finally learn just how he came to be known as Captain Hook. But the other fellows are just as fun: Nehal Joshi as the Stache’s loyal sidekick Smee; Pelteson, who doubles both as Hawking Clam and the sinister Slank, whose treacherous plot to steal what he thinks is an ordinary treasure drives the action; and Michael T. Brown (Sanchez) and Mbali Guliwe, Alejandro Hernandez and Kyle Whalen as pirates (and more).

This prequel is, of course, a great rollick. And for folks who grew up with “Peter Pan,” it’s a blast to pick out all the little seeds that show up in that work. But if it were just a smart prequel, it would hardly do justice to its subject. Happily, this production does tap into the emotions and values that so many children and adults love in “Peter Pan.” The result is a play that’s both fun and moving.