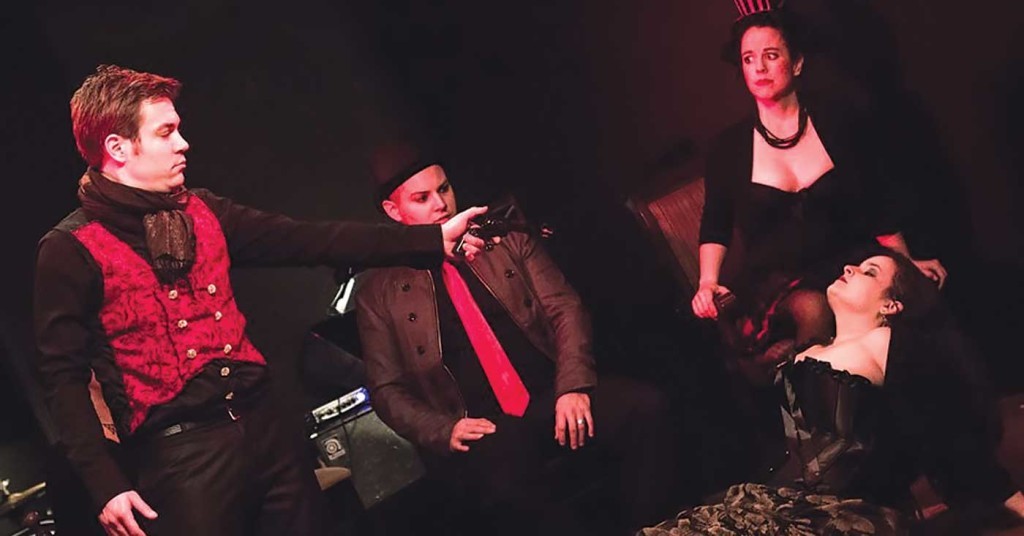 'Unhindered and Ungendered: A Killer Show'

We love our murders, yes we do, whether they’re committed in cozy novels, ancient ballads, glossy Hollywood films or slickly produced TV police procedurals. But if you’re up for a bracing dose of guilty pleasures, the new Wayward Actors musical review, “Unhindered & Ungendered: A Killer Show,” which opened last week at The Bard’s Town Theatre, offers a great night of musical mayhem.

The company has pulled together a nicely sequenced, fast paced collection of some 20 crime-related selections drawn from a wide swath of musical theater with a geographic itinerary that spins from “Urinetown” to “Oklahoma,” to Fleet Street (where a certain demon barber named “Sweeney Todd” and a local baker are selling some interesting pies).The production is bathed in red lights (designed by Martin French), and the cast is clad mostly in ironic black fashions that smack of Victorian hip. A very deft ensemble (Donnie Arbuckle, drums; Dan Canon, guitar; Derek Carpenter, bass; and Doug Jones, piano and music director) give the show’s diverse score a lively, confident musical pulse. And director/choreographer Valerie Canon and a cast of 11 (enough to pack the intimate Bard’s Town stage) have put together a great mix of splashy, production numbers and fine intimate bits.

The show opens with one of those production numbers, the syncopated rock of “Murder, Murder,” from “Jekyll & Hyde,” then proceeds to a delightfully quavering solo song-and-dance routine featuring Jack Francis with “You Gotta Die Sometime,” from the Tony-winning musical “Falsettos.”

The musical segments are punctuated and amplified by mordant aphorisms — so after Francis completes his resigned lament, one of the players pops up and intones: “Someone has to die, in order that the rest of us should value life more — Virginia Woolf.” And over the course of the play, those little quotations create an intriguing conversation with themselves, sometimes subverting the pleasures of the music.

One segment is prefaced by quotations from Jean-Paul Sartre, “I say a murder is abstract. You pull the trigger, and after that you have no idea what’s about to happen;” and Elliott Spitzer, “People pull the trigger, but guns are the instrument of death. Gun control is necessary, and more delay just means more death and horror.” But those words, grave as they are, soon give way to a superbly staged rendition of “Gun Song” from the Stephen Sondheim musical, “Assassins,” with deadly, droll performances from Herschel Zahnd, Paul Stiller, Susan Crocker and Ilse Apestegui, who detail the natural history of a gun from mine to mill to factory to the moment when “all you have to do is hook your little finger, crook your little finger — and you can change the world.”

This is a production that gives all the members of the cast an opportunity to highlight their strengths as actors, vocalists and dancers. And as the title suggests, there are plenty of gender-bending moments — Jake Minton as a guy-fatale in “Dance O’ Death,” from the musical “9 to 5,” and JoAnne Sweeny and Ilse Apestegui as Curly and Jud in “Poor Jud is Daid,” from “Oklahoma.”

But really, the entire production is like a highlight reel, with nary a single dull moment.

Taylor Clemons and Mandy Kramer have a deliciously demented discussion of menu items in “Little Priest,” from Sondheim’s “Sweeney Todd: The Demon Barber of Fleet Street.” Susan Crocker and Marcy Ziegler argue at first about a similar menu item in “Git It” from “Little Show of Horrors — but they eventually come a fitting solution.  And building on the theme of self-serving justifications, there are also “Snuff that Girl,” from “Urinetown” (performed by Jess Harris Stiller, Taylor, Clemons and Jack Francis), and the great “Cell Block Tango” from “Chicago” (performed by Herschel Zahnd, Jake Minton, Paul Stiller, Susan Crocker, Mandy Kramer and Marcy Ziegler).

And those pieces are just from the first half.  There are great production numbers “Madame Guillotine” from “The Scarlet Pimpernel,” “The Woman’s Dead,” from “Curtains,” and great small ensemble pieces like “Big Ass Rock” from “The Full Monty (Minton, Sweeny, Paul Stiller).  By the time  Ilse Apestegut powers the ensemble through a grand “Just Around the Corner,” from “The Addams Family,” the evidence is indisputable: This is definitely a killer show.