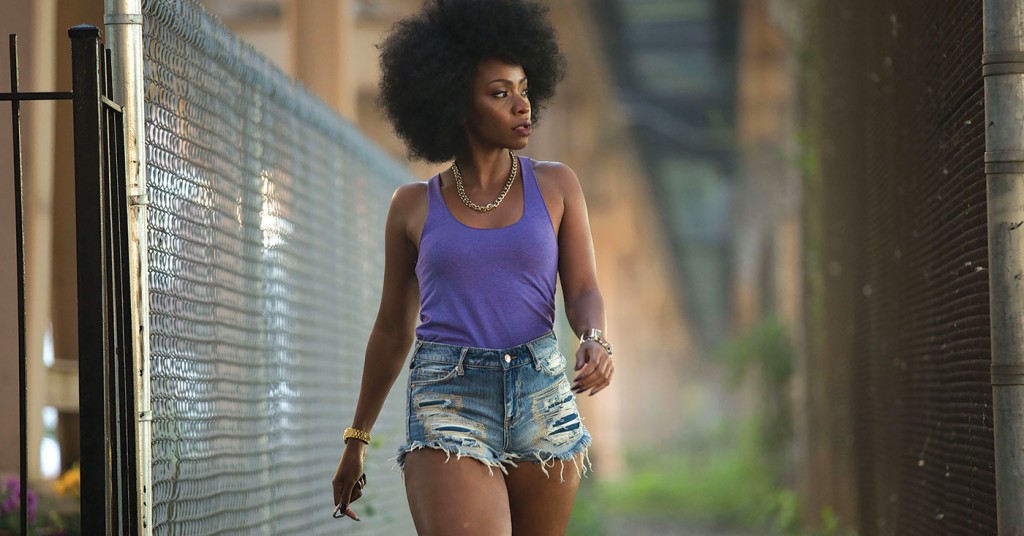 BURNT
2015; $22.98; R
Bradley Cooper and Sienna Miller have been burning up the talk-shows to promote this film-critic favorite, the tale of a nearly-famous chef who can’t decide whether he wants wealth and fame and glory, or simply the freedom to create amazing food. Uh huh. A silly premise, to be sure, but these two vets know how to push all the right buttons — while simultaneously making us hungry as hell! They make it look so easy. An entertaining master class in acting, and a terrific date movie. Just make sure you eat first.

CHI-RAQ
2015; $22.49; R
Filmmaker Spike Lee hits all the right notes in this gritty, artsy experiment based on Aristophanes’ fifth-century play “Lysistrata,” wherein the women of Greece refuse to have sex with their men until they stop their warring ways. Re-set to the ghettos of modern day Chicago where endless gang wars have made life unbearable, Teyonah Parris leads the no-nookie charge with Nick Cannon, Wesley Snipes, Angela Bassett, and Samuel L. Jackson in tow (though John Cusack’s oddly white bombastic black-preacher character steals the show).

MOMOKYUN SWORD COMPLETE COLLECTION
2014; $59.98; UR
An instant classic, this anime comes from the harmless end of the “large-breasted young Amazon warrior girls with almost nothing to wear” spectrum. (Ed: Please use the proper Japanese term for the genre: “Honidews maki miso hapi.”) A warrior princess battles evil with the help of three helper spirit-gods and a team of Celestial Maidens, all in search of the fabled Michimi Peach, which can bring order to the universe. Throw in a race of demons, a cracked scientist, and an Oni princess and you got yourself a good old-fashioned jiggly, bouncy, hot-pants-clad battle royale.

A BRILLIANT YOUNG MIND
2014; $25.98; PG-13
This excellent Limey feature finds Asa “Ender’s Game” Butterfield as a sheltered young math whiz learning to cope with the real world and all its confusing, frustrating stumbling blocks (like girls) after being selected for an international math championship. Alexa “Detectorists” Davies practically glows as the brainy winsome blonde who disrupts his mental processes, though Rafe “Shaun of the Dead” Spall is a close second as the boy’s mentor. Every kid in America should see this. The adults, too.

COMIN’ AT YA!
1981; $13.98-24.98; R
Until recently, 3D movies were largely a gimmick to draw patrons into less-than-stellar films: 1952’s “Bwana Devil” famously promised “a lion in your lap, a lover in your arms!” But none was more egregious than this 80’s Western turkey about a pair of bad-guys who stampede into town, shoot up a wedding, and abscond with the beautiful, blushing bride (Victoria Abril, today a popular Spanish soap-star). To-be hubby and 60’s Spaghetti Oater Tony Anthony gallops to the rescue while 3D cameras take viewers on a dizzying, dusty chase, launching a mini-Renaissance of the 3D art-form that lasted several years.

GOOSEBUMPS
2015; $19.98-45.98; PG
Jack Black suffered from overexposure late in his “Pick of Destiny”/ ”School Of Rock” years, but it’s nice to see him back in form again as R.L. Stine, author of the titular kid monster-books. Well, not really the author, he’s Stine in a world where the monsters are real and just waiting to bust out of his books. Or something like that. Filled with colorful, wildly-animated creatures, many of which are truly and appropriately scary as hell — just like in the books, it co-stars Odeya “The Giver” Rush as his daughter, who spends much of the movie trying to not be trampled by dad and his minions. Too much fun.

JACK’S BACK
1988; $21.98-26.98; R
Prior to his breakout role in “Sex, Lies, and Videotape,” James Spader starred in this tortured 80’s slasher flick. He plays dual roles, first as a doctor suspected of being a serial killer. Then, when the doctor is himself murdered, Spader reappears as his identical twin brother — psychic and already hot on the trail of the madman! Cynthia “Fame (TV)” Gibb plays the requisite hottie, but what makes this a must-own is the director, Rowdy Herrington, whose very next picture — “Road House” — would set a high-water mark for bad cinema which stands to this day. Finally available on Blu-Ray with many welcome bonus goodies..

SONNY BOY
1989; $18.98-26.98; R
The late David “Kung Fu” Carradine, veteran of over 230 films and TV shows, got top billing in this truly disturbing take on American values, though the real star is first-time actor Michael Boston. He plays the titular young man, kidnapped as a child, his tongue cut out, then raised in a cage by psycho Paul L. “Dune” Smith and his transvestite spouse (Carradine). It’s a twisted treatise on the nature of family, with the incomparable Brad Dourif (“Lord Of the Rings”) as a tortured lackey. Completely unique in every way, now on Blu-Ray.

*** More Recommended Videos for our On-Line Readers, Only!
AYA ARCOS
2014; $24.98; UR
Set in the wild Gay scene of Rio de Janeiro, we follow a respected author who falls for a young street hustler with a long history of unprotected sex. Keenly aware of the threat of HIV, the author is nonetheless driven both by desire and the understanding that he has never really let himself experience all of life, including its dangers. Will this heady excitement lead to catastrophe, or the passion he has always denied himself? In other words: Does he uncloak the joker, or is it “No balloon, no party?”

BLACK MOUNTAIN SIDE
2014; $24.98; UR
While this snowbound horror is admittedly a sausagefest – there’s not a female to be found in the cast – it succeeds admirably. In the wilds of Canuck country, archeologists uncover an anomalistic structure deep in the snow. What follows is a carefully framed series of hallucinations – or are they? – coupled with murderous paranoia and friction between the men. With Michael Dickson from “Wrecker” as the head prof; has a nice “The Thing” feel to it, but on a budget. Worth checking out.

BLACK WORK
2016; $23.49-34.99; UR
Now this is how you make a drama! A veteran of nearly 50 BBC TV outings, Sheridan Smith stars as the police-officer widow of an undercover cop killed under suspicious circumstances. When she begins snooping, her bosses intervene, making her suspect that either her husband was on the take, or the men investigating his death are! While shepherding her two children through the grieving process she enlists the aid of a trusted friend/co-worker, and together they discover … Well, it’s too good to spoil here, but well worth your time. All three episodes from the miniseries; co-stars Matthew “The Musketeers” McNulty and Lisa Dillon from “Hawking.”

CORPSE PARTY OVA COLLECTION
2015; $35.98; UR
This wildly unpredictable anime miniseries (“Bougyaku sareta Tamashii no Jukyo”) is a horror fan’s wet dream, available for the first time ever on these shores. A group of cursed highschoolers get dragged into a dimension of gore and madness by a Samurai where they are systematically tortured and dismembered. In short: This is Horror with a capital “H”: Nothing is sacred, little is explained, and even less is left to the imagination. And if that doesn’t sound appealing then you have clearly never played a video game in your life. Compelling and committed, with a focus on the bonding and self-sacrifice among the victims..

HAMATORA: SEASON 2
2015; $69.98; UR
Often compared with “X-Men” for the way it’s plots and characters evolve and interact, this anime series is set in a world where some people have special powers, though no one seems to know why. Several of them, all teens and younger, who work for the titular detective agency, go on the case when a serial killer starts murdering others like themselves. Done in classic “big-eyed waif” style, with artwork as breezy and playful as the voice-work, and only the slightest blush of teasing fan service. Also known as “Re: Hamatora” and “Hamatora the Animation 2”; now available in a glorious Blu-Ray with all the trimmings.

HOWL
2016; $12.98-24.98; UR
No one’s going to accuse this minor Limey horror of being a great movie – but that doesn’t mean its not entertaining! The plot is simple: An overnight train breaks down in the middle of nowhere and is attacked by a pack of werewolves. The creatures themselves are truly frightening – no “humanizing”, no “hero monsters”, these things scared the shit out of us! And the human victims are very believable; you will be shocked when you see them being ripped to shreds, screaming to the end. With surprisingly good practical effects, Sean Pertwee in a cameo, Holly “John Carter” Weston, and cute little Rosie Day from “Sixteen”; what more could you want?

NAZ & MAALIK
2015; $24.98; UR
This festival favorite is a great little film: different, imaginative, with something important to say. The titular black teens are closeted gay Muslims, struggling to survive in Brooklyn, unaware that they are being watched – and recorded – by secretive agents of the War On Terror. Clearly, the clandestine meetings and furtive nature of these two surely hides a terror cell about to strike, wouldn’t you agree? Stars on one you ever heard of, including Curtiss Cook Jr. and Kerwin Johnson Jr. in the title roles, though we suspect you’ll be seeing much more of them in the near future.

PARTY OF FIVE: THE COMPLETE SERIES
1994; $69.98; PG-13
Frankly, we weren’t fans of this show when it ran in the late 90’s, but that reflected our own limited tastes at the time, not the quality of the show (a prejudice we now very much regret). Truly groundbreaking, it dared to show siblings struggling to survive as a family after their parents are killed. And with a cast that includes Scott Wolf (“NCIS”), Matthew Fox (“Lost”), Neve Campbell (“Scream”), and Lacey Chabert (“Lost In Space (1998)” – with help from Jennifer Love Hewitt (“Criminal Minds”) and Jeremy London – how could this be anything but great? Since that day legal wrangling has kept half the series off home video shelves, making this new 24-disc release one of the most-anticipated events of 2016. All 142 sexy, surprising episodes. Never morbid; with humor and heart enough to spare. Recommended.

THE ASSASSIN
2015; $26.98; UR
A wildly romantic, over the top historical potboiler from China that’s been collecting film festival awards from around the world. Lovely Qi Shu stars as the titular orphaned assassin, raised by a nun who uses the girl’s lethal talents and training to dispose of evil in their land. When she fails in one task, the nun punishes her with a new goal: Kill the man she loves! Oddly enough (to Western eyes), this is not necessarily the pivotal plot point: The girl’s identity as a Righteous Assassin, the only personae she has ever known, colors everything she does. Truly exceptional work from director Hsiao-Hsien Hou.

THE FACTS OF LIFE: SEASON 8
1986; $26.95; UR
The next-to-last season for this venerable 80’s sitcom starts with Mrs. Garret (Charlotte Rae) getting married, introducing us all to her new loud, raucous, trailer-trash sister-in-law, Cloris Leachman along the way. This character quickly becomes the “girls” new adult influence as Rae moved on to other projects. Now adults in their own right, the girls must face life in the big city: find jobs, take/lose lovers (discretely handled, of course), and learn the power of friendship when things get out of hand. The highlight of this season is “62 Pick Up”, a flashback episode set in an imagined 1960s reminiscent of “American Graffiti.”