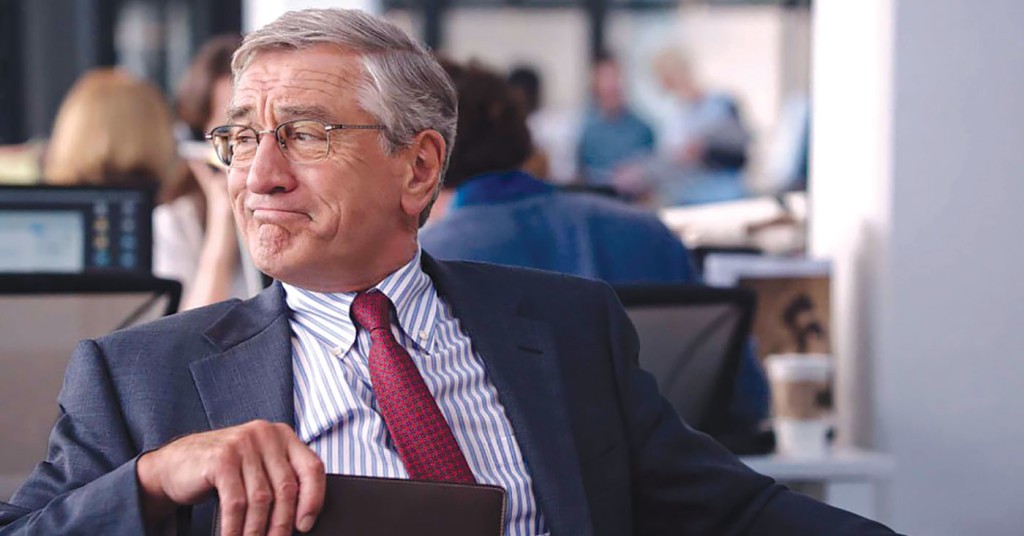 THE GUARDIAN
1990; $21.98-29.98; R
(Bill here, flying solo this week while my young apprentice Dave nerds his way through the CES. Hope to have him back on board next week.) William Friedkin’s horror followup to “The Exorcist” was this fondly-remembered if not overly successful tale of a nanny whose bark is literally worse than her bite. TV-face Dwier Brown plays the sappy dad, with Carey “Law & Order” Lowell as the mom who branches into sleuthing to uncover the truth about their seedy nut-job babysitter (Brit TV star Jenny Seagrove; “Judge John Deed,” et.al.) Who may be beholding to a larch. Can this pest be stumped? And listen for the theme song, “Oh, Wooden’ Tit Be Loverly?”. A pithy idea inspired by a fairy tale; belongs in every fright-fan’s vidcase.

THE INTERN
2015; $14.99-28.99; PG-13
Living lamplight-legend Robert De Niro launches an admittedly little film; a rare thing in his career, to be sure, but he turns it into something special. He’s a 70-year old widower, bored to tears with retirement, who wrangles a intern gig at a hip online fashion site just to have something to do. The ultimate fish out of water, his new boss is lovely and talented Anne Hathaway, with whom he shares a wonderfully funny and very uncomfortable hotel-bedroom scene. I would have liked to seen something sexier — as would many of the moviegoers I talked with — but all-in-all a good little comedy, well written and brilliantly acted. What more could you want?

EVEREST
2015; $19.98-49.98; PG-13
An eye-popping visual treat telling the true tale of two commercial mountain-climbing teams, both attempting to scale the world’s highest peak in 1996, when out of nowhere a storm of biblical proportions descends upon them. With temperatures beyond human endurance, winds capable of ripping the flesh off faces, lost supplies and no hope of rescue, the dwindling survivors launch a doomed quest to return to their families. Shot almost entirely on actual mountainsides, stars Josh Brolin, Jake Gyllenhaal and Jason Clarke spent months training, learning new skills, and practicing dangerous gags for famed director Baltasar Kormákur. The least you can do is watch it.

HANAYAMATA: COMPLETE COLLECTION
2014; $49.98-69.98; UR
From the slice-of-life anime subgenre comes this tale of Hana, an American girl attending school in Japan, who meets Naru, a devotee of the Japanese folk dance called Yosakoi. Together they form a school dance-club, which ticks off the bitchy class president. They spend the year growing, learning, and overcoming challenges, but on the eve of their first public performance Hana learns she must return home. Surprisingly addictive, truly touching and enlightening, if you are of a certain age. With great artwork and songs that are maddingly hard to get out of your head.

LOCODOL: COMPLETE COLLECTION
2014; $49.98-59.98; UR
The word “locodol” is Japanese slang for “local idol,” a group singing competition, the winners of which become roving musical ambassadors for their town. And should you have trouble finding this video, just ask for the easy to remember “Futsu no Joshikosei ga Locodol Yattemita” (“Normal High School Girls Tried Being Locodols”). Yes, it’s another young-girl slice-of-life anime filled with sweet, chirpy young teens, some dressed in flirty sailor costumes, talking way too fast and making not one lick of sense — just like the real thing! Adorable as heck with catchy songs like “We’re (we’re) full (full) of (of) Love (love).” I really need to get out more.

STRAIGHT OUTTA COMPTON
2015; $19.98-34.98; R
A dramatic telling of the founding of NWA, the groundbreaking Los Angeles-based hip-hop group formed by Dr. Dre, Ice Cube, et.al. While I can certainly empathize with the social malaise and righteous anger which sparked the protest poetry of the 90s, my job is to review the film … and the film just isn’t all that good. Some fine performances, an air of darkness, dangerous locales filled with drugs, sex and violence (all the things you look for in a music biopic) but with no real payoff in terms of how the music made anyone’s life any better — and the script strains so hard to be meaningful that all sense of drama is lost. Then again, maybe I’m just not the target audience. You decide.

THE DIARY OF A TEENAGE GIRL
2015; $30.98-34.98; R
Brit TV face Bel Powley (“M.I. High”) plays the titular teen, pushing through the angst and hormonal turmoil of young adulthood in ‘70s San Francisco. This frantic blossoming makes life difficult for her single mom (Kristen Wiig), particularly when the girl starts dating mom’s boyfriend, Alexander Skarsgård! A funny, nicely awkward, intelligent and knowing ride that implies the Summer Of Love was America’s own entrance into womanhood. Or something like that. In any case an enjoyable treatment of Phoebe Gloeckner’s award-winning novel.

*** More Recommended Videos for our On-Line Readers, Only!
MAKING ROUNDS
2015; $17.95; UR
Medical treatment in America has become so thoroughly corrupted by money/greed/politics that just defining what you mean by “quality healthcare” has become a fools’ errand. That’s why we so enjoyed this little doc about a pair of seasoned cardiologists who largely eschew expensive tests for the low-tech medical practice of … talking to patients! At their side, new doctors learn how to treat their patients simply, warmly, and with far less expense, extending their lives, reducing their pain, increasing the quality of life, and pissing off the hospital brass in the process. Seriously, you gotta see this!

SWEATY BETTY
2015; $21.95; UR
Prince George’s County, Md., is a small burg near Washington DC. Essentially an up-class ghetto, not much happens here: neighbors meet on the street, unemployment is high, and everyone struggles to make a buck any way they can. And then there’s this one guy who owns a half-ton pig, the mascot of the Washington Redskins. Based on real events, you’ll never guess what happens next. Not really a doc and not really a scripted drama, this might be called a home video if it wasn’t so damned compelling. Whatever it is, we liked it.

THE CLEARSTREAM AFFAIR
2014; 17.95; UR
While America has recently been trying to rein in its out-of-control banks and their greedy too-rich-to-jail execs, France has been fighting this fight for many decades. Into that miasma walked Denis Robert, an investigative journalist who spent over 10 years tracking the blatantly illegal operations of the Clearstream Bank, which counted French officials, mega-corporations, lawyers, and lawmakers among its well-paid lackeys. This docudrama stars Gilles Lellouche (“Point Blank) as Robert, and Charles Berling as Judge Renaud Van Ruymbeke, who empowered Robert’s quest. Suspenseful, exciting and surprisingly visual. Recommended.

THE LOOKING GLASS
2015; 17.95; UR
First-time actress Grace Tarnow absolutely knocks one out of the park in this Michigan-filmed drama about a 13-year old orphan (thin, strikingly lovely blonde Tarnow), sent to live with her former-actress/singer grandmother in the wilds of (shudder) Indiana. And to make matters even more upbeat, Grannie (veteran actress Dorothy Tristan, “Down and Out in Beverly Hills”) has Alzheimer’s Disease, impelling her to unload a lifetime’s wisdom on the girl while the old lady can still remember some of it. We were surprisingly entertained. A little film, to be sure, but recommended.