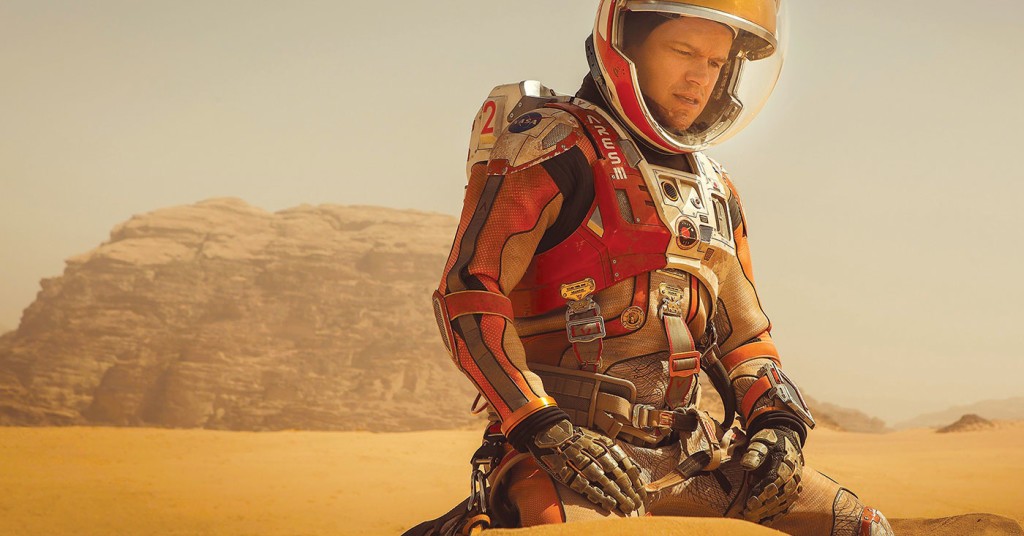 BOLERO / GHOSTS CAN’T DO IT
$28.98; R
A pair of legendary 80’s soft-porn titillaters starring the incomparable Bo “The Most Beautiful Woman Who Ever Lived” Derek; both products of her pervy Svengali-husband, John. Inspired by her star-turn sorta-sex-scene opposite Dudley Moore in “10,” the first (1984) finds Bo traveling the world, sometimes bare astride a horse, searching for the ideal lover, yes, this be art. The other (1989), begins with Bo happily loving elderly hubby Anthony Quinn. He dies, then returns as a ghost to encourage Bo to find a hot young stud, whom she is to kill so Quinn can possess his body and return to her. Hey, we’ve heard wedding vows that made less sense. With Don Murray, Julie Newmar, and — believe it or not — Donald “Douchebag” Trump! A welcome nudie time-capsule.

THE MARTIAN
2015; $19.99-22.99; PG-13
True Science Fiction cinema is all but gone, lost amid slobbering zombies, speculative teen fantasy, flashy superheroes, and vid-game spinoffs. But this flick strokes its inner nerd without embarrassment, focused on Matt Damon’s frantic attempts to “science the shit” out of his impossible predicament: left for dead on Mars with limited food, water and air, and no rescue possible for years to come. The rest of the surprisingly large cast reads like a Who’s Who of modern mega-stars, but it’s Damon’s upbeat, pissed-off, yet very fragile human Martian that makes this movie so much fun. An absolute must-own, regardless of your film tastes. And if you like the movie … read the damned book, it’s even better!

IRRATIONAL MAN
2015; $30.98; R
Woody Allen’s latest is dark, even for him; but it’s also a comedy. Not a ha-ha comedy of jokes and clowns, but a comedy of manners and societal expectations and murder. Joyless and unlikeable Professor of Philosophy Joaquin Phoenix (an actor we truly can’t stand) finds himself adrift in a small college town who somehow gets drawn into affairs with both fellow prof Parker Posey, and student Emma Stone. Nice work if you can get it! But he’s still not satisfied. Then he overhears a stranger talking about … Well, we won’t spoil it, but this thing suddenly gets very real very fast.

LOVE FINDS YOU IN CHARM
2015; $14.95; UR
Never heard of Danielle Chuchran? Well, she was filmdom’s very first Katnis Everdeen! Before there was “The Hunger Games” there was “Katniss & Rue,” a short film the producers created to demonstrate what they had in mind. Young, slightly-built Chuchran won the lead of “K&R,” putting her in a prime position to lead the series. But higher-ups eventually demanded someone with more gravitas and box office appeal, leading to Jennifer Lawrence. Here Chuchran stars as a spunky, young, innocent and cute-as-a-bug Amish woman, torn between her attraction to Trevor “90210” Donovan and her desire to see more of the world. A very good date flick.

PARANORMAL ACTIVITY: THE GHOST DIMENSION
2015; $32.98; R
This fifth in the series (or is it sixth?, we’ve lost count) took a major chance by doing the one thing that spooky-movie franchises never, ever do: Reveal the invisible monsters! A cursed camera allows us all to finally see the spirits plaguing the latest residents of the “Paranormal Activity” house, played by drop-dead gorgeous Brit Shaw of “Nashville” and Chris J. Murray, best known as “The Voice of The Crowd of Liberty City” in Grand Theft Auto vidgames. Some of the best effects of the series.

ROSENCRANTZ AND GUILDENSTERN ARE DEAD
1990; $19.98; PG
A nicely repackaged Blu-Ray version of one of the most acclaimed small films of the early 90’s. Gary Oldman and Tim Roth are the two titular characters from Shakespeare’s “Hamlet” — but more-or-less unaware that they are in a play! Or are the rest of us in a play and they are in the only true reality? Hmmm. Through it all they stumble about, constantly questioning why they keep doing the stupid things they do, which leads to a mind-bending and damned funny treatise on the nature of Man. Or Fate. Or Destiny. Or Hamlet’s malaise, which everyone seems to be trying to define. In any event, Richard Dreyfuss plays The Player while we, The Audience, sit mesmerized. Great movie.

THE IMAGE REVOLUTION
2014; $18.99; UR
Never heard of Image Comics? Image was born in the early 90s when Marvel Comics’ finest talents walked out, fed up with being ripped off by their employer. Those founders included Todd McFarlane (Spiderman), Jim Lee (X-Men), Rob Liefeld (X-Force), Marc Silvestri (Wolverine), Erik Larsen (The Amazing Spider-Man), Jim Valentino (Guardians of the Galaxy), and the Uncanny X-Man duo of Whilce Portacio and Chris Claremont. Overnight, Marvel’s stock became worthless, and in the ensuing panic the modern comic industry was born. This doc tells that unholy tale, which is directly responsible for “The Walking Dead” and today’s deluge of superheros at the cineplex.

*** More Recommended Videos for our On-Line Readers, Only!
HILL STREET BLUES: THE FINAL SEASON
1986; $34.93; UR
Hitting it’s seventh season (which, for syndicating purposes is usually the last) in full stride, The Blues dove through a laundry-list of prescient American issues in style. From aspirin tampering to youngsters committing adult crime to a walkout of Public Defenders over working conditions to racial strife within the police department, each topic was explored with intelligence, respect, grit, and just enough humor to keep it all in perspective. Leaves a breathtaking legacy of entertainment that made viewers think while sitting on their asses. Also available in a Complete Series boxed set for under $85. A must own.

PAINKILLERS
2015; $14.99; UR
An ambitious and nicely done scifier with a cast that includes Tahmoh “Supernatural” Penikett, dark and smokin’ Lesley-Ann “Gotham/Lucifer” Brandt, Colm Feore, and Erica “Smallville” Durance, several of whom are seen preparing for a secret military mission in Afghanistan, only to wake up in a hospital in the States unable to remember their own names. The plot is a nicely ambitious mess of alien artifacts, shadowy conspiracies and the like. Won’t change your life – unlike its participants – but a pleasant evening’s diversion.

THE WONDER YEARS: SEASON 4
1990; $35.96-39.95; UR
Lovable little Fred Savage’s “Kevin” makes it to 9th grade this season, a time when boys start feeling the call to become men, which in this case means standing up to his father (Dan Lauria), facing down bullies, getting a part-time job, and discovering that sweet, painful, life-long obsession with everything female. Our favorite episode from this season is “The Journey”, with Kevin and several of his buds taking a cross-town trek in the middle of the night after they learn that a group of 10th-grade girls are going to have (pause for effect) a slumber party! Ah, those were the days … One of the show’s best seasons; our highest recommendation.