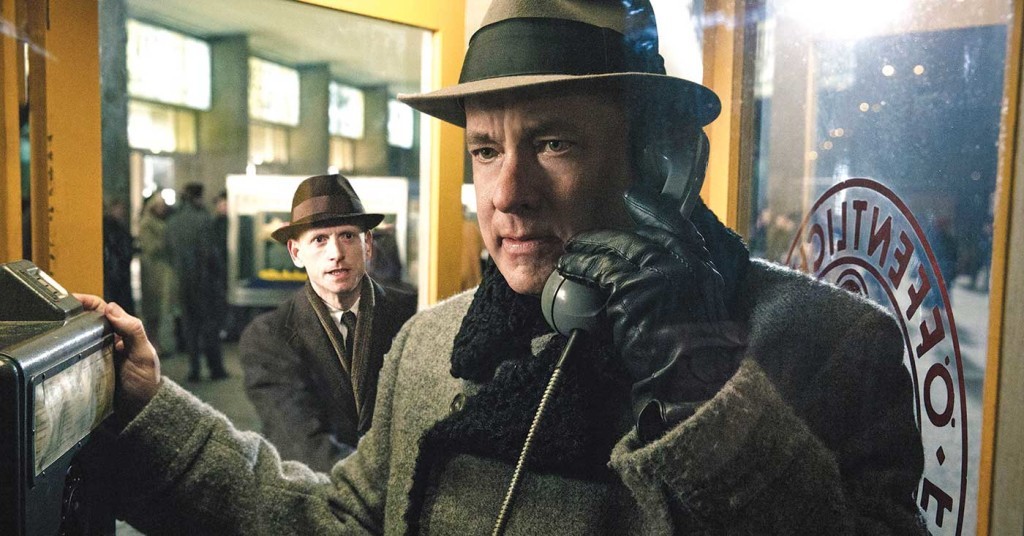 BRIDGE OF SPIES
2015; $16.99-22.99; PG-13
Tom Hanks continues his modern everyman run as James Donovan, the real-life low-key lawyer connived into a high-stakes chess game with the Soviet Union in 1960. The Russkies had just shot down Francis Gary Powers, the Jenkins, Kentucky, native piloting America’s top-secret U-2 spy plane illegally in Soviet air space. Unfortunately for the U.S., Powers survived, creating the greatest international incident since the last one — and it was Donovan’s job to negotiate his release. No one, not even he, expected it to succeed. Damned good drama.

TRUTH
2015; $31.98-34.98; R
Another movie based on true events? Must be Oscar season. In this one Robert Redford plays TV newsman Dan Rather, with Cate Blanchett as his producer, Mary Mapes, both of whom found themselves out of a job after they reported on “60 Minutes” that President Bush Jr. avoided the Vietnam draft thanks to his dad’s political connections. That story couldn’t possibly be true, now could it? One of the best old-school dramas we’ve seen in years, with a supporting cast featuring Topher Grace, Dennis Quaid Stacy Keach and Dermot Mulroney.

BLADE DANCE OF THE ELEMENTALERS: COMPLETE COLLECTION
2016; $49.99-53.99; UR
This anime is a charmer. “Elementalers” are pure young maidens with the power to communicate with the many spirits of their world, and only the most gifted are granted training at the Spirit Academy. Then the impossible happens: A boy elementaler appears! And through an accident he saves the life of a young cadet and “steals” the spirit she was trying to bond with. Yes, it’s all very deep and profound, but never boring. With skinny, big-eyed-waifs, clean artwork, some bulbous bosoms, chirpy voices, a smidge of teasing fan service, good music and elaborate plots, this is two discs of harmless fun.

HOW TO WIN AT CHECKERS (EVERY TIME)
2015; $24.98; UR
If you yearn for something exotic, universal and deeply human, this is the film for you. Set in the squalor of modern Bangkok, Oat, an 11-year old orphan, struggles to find a place in the world with his older brother — but their future together is clouded by the upcoming military-draft lottery. Childishly determined to keep his brother by his side, the boy does something very foolish, learning that rash acts can have extraordinary consequences (we won’t spoil it). A surprising and moving film that completely sucked us into the boy’s alien yet all-so-familiar life. You’ll be telling your friends about it for weeks.

ROCK THE KASBAH
2015; $22.98-29.98; R
Saturday Night Live alum Bill Murray plays his patented grumpy old burn-out in this more-or-less true tale of an, er, grumpy old burn-out rock promoter, stranded in the wilds of Afghanistan, who wanders into a cave and comes out with Salima Khan (Leem Lubany), destined to be an international singing sensation. Zooey Deschanel is fun as the bitchy singer who dumps Murray in the middle of a war zone, with Kate Hudson as a lovable hooker, and Danny McBride and Scott Caan as comically degenerate scavengers — though Bruce Willis nearly hijacks the movie spoofing his “Die Hard” personae. Kind of a mish-mash, but we liked it.

TAKE ME TO THE RIVER
2014; $19.98-24.98; PG
The river in question is the mighty Mississippi; the town is Memphis, and the subject is the Blues. Terrence Howard hosts a loving, long-overdue, Lord-take-me-now sojourn to the home of America’s greatest musical treasures, featuring a who’s who of modern artists in blessed union with the few still-breathing legends who forged our culture’s most original and distinctive sound. From Snoop Dog to Booker T. Jones, from William Bell to Mavis Staples, from Otis Clay to Bobby Bland, this is what America means to the world. Breathe it in my children and rejoice, for all the world is a song.

THE BEAUTY INSIDE
2015; $24.99-29.95; UR
This South Korean film-festival favorite is a delightful, brilliant and imaginative look at love, identity and the universality of the human experience. Woo-jin (Yeon-Seok Yoo) has a problem. Every night he goes to bed with his lovely girlfriend Hong Yi-soo (Hyo-ju Han), but in the morning he’ll wake up as somebody else. He’ll have a different face, body, nationality, age, language, infirmities, gifts, pains and joys. Each day is spent trying to regain his own body with the help of the understanding Yi-soo. Wonderfully romantic, with a sense of intimacy and easy humor unlike anything we’ve ever seen. A subtitled dream of a film.

ZOMBIE FIGHT CLUB
2014; $14.98-19.98; UR
Our buds at Shout!Factory imported this wonderfully wretched Taiwanese rotter originally called “Shi Cheng” (very loosely translated as “Honest”) then slapped on that clever name, along with the girl-in-leather-with-a-great-ass cover art. You gotta be impressed. Lovely, melon-hootered model/actress Jessica Cambensy apparently has almost nothing to wear after her boyfriend is killed in a zombie attack. Truly stupid, ugly, cruel and depressing, with crappy CGI — if good-quality rotting flesh. A bestial no-budget excuse for tease and splatter. It is awesome!

A FRENCH VILLAGE: SEASON 2
2009; $39.95; UR
Aka, “Un Village Français”, this extremely popular French dramatic series set in the early 1940s, just as the Nazis were occupying rural France, enters its second season with “La Loterie”, an episode centered around a both brothel where the Commissioner hangs out, and a prison. But the best thread involves lovely teacher Lucienne (Marie Kremer, smokin’ hot in 2010’s “Gigola”) who attracts the attention of a too-young German soldier, flush with power. A truly remarkable series; in French with English subtitles.

MEET THE PATELS
2015; $17.98-19.98; PG
Ravi Patel (TV’s “Grandfathered”) has hit comedy gold with this docu-kinda-reality-romcom in which he faces that most dreaded of all possible fates: turning 30 while single. His crazy family – all parts played by his real crazy family – helps/hinders by encouraging him to do it the traditional Indian way, which apparently involves having every member of the family be as embarrassing a butt-insky as possible. We could probably explain this better, but that might spoil the unexpected fun. Trust us, this is a hoot.

SLASH: RAISED ON THE SUNSET STRIP
2016; $16.98-21.95; UR
An unabashed love letter to those of us who spent our teen years hunched over record players and tape decks, guitars in hand, playing the latest hits on the slowest speed possible while picking out the “licks.” Yes we were young once, and virgins, but thanks to the magic of the guitar we found … well, never mind what we found; in the case of Guns And Roses guitar wizard Slash, he found super-stardom. This 90-minute made-for-TV bio features over a dozen rock gods from Alice Cooper to Dave Grohl, Lemmy to Joe Perry, and Nikki Sixx to Matt Sorum, all extolling the virtues of rock life and the talent of Slash. What more could you want?

SNOW WHITE AND THE SEVEN DWARVES
1937; $22.99; G
Universally heralded as “The Greatest Animated Film Of All Time” – which we would shorten to simply the Greatest FILM Of All Time – Walt Disney’s first-ever full-length hand-drawn masterpiece finally makes it to Digital HD with this release, which also includes Blu-Ray and DVD copies as part of their Signature Collection. As if that weren’t enough, there are also a number of new bonus goodies, including a rare 1960’s audio interview with Uncle Walt, fleshed out with stills and archival footage to create an intimate and loving tribute to hand-drawn animation and the men who perfected it. A must-own..

SPIRAL: SEASON 5
2014; 27.95; UR
Our readers tell us that this subtitled French crime series, aka, “Engrenages”, filmed in a pallette of stark greys, is one of their faves – and for good reason. Season 5 starts with a pair of decaying female bodies being hauled from a canal, but the ensuing murder investigation quickly expands to include organized crime, street-level drug-gangs, and violent robberies at ATM machines, all seemingly under the protection of the French legal system. Frustrated and angry, Captain Berthaud (Caroline Proust) strikes out at those gaming the system – leading to threats against her family. A dark and gritty look at justice on the streets of Paris; highly recommended.

THE LIZZIE BORDEN CHRONICLES: SEASON 1
2015; $19.99; UR
Cute and sexy Christina Ricci leads a stellar cast in this surprisingly entertaining LifeTime TV series. She plays the titular ax-murderess shortly after having been famously acquitted of chopping up her dad and stepmom in the 1890’s. Those crimes were real, but this after-the-fact series is pure fiction, with Lizzie and her sister Emma (Clea DuVall) gleefully making mincemeat of any and all who cross their paths. Watch for the likes of Cole “A Good Day to Die Hard” Hauser, cameos by John Heard, red-hot redhead Kimberly-Sue Murray (“Crimson Peak”), and “Copper”s Dylan Taylor, again playing a period cop. Fun stuff.

UNCAGED
2016; $14.98-27.98; UR
The werewolf genre meets found-footage in this clever, if extremely low-budget straight-to-video outing starring Ben Getz (who once did a bit part on “Blue Bloods”) in his first full-length film. He’s a troubled young man who, after realizing he has been sleep-walking, straps a camera to his chest one night to see where he has been going. You can probably guess the rest. Simply terrific makeup, old-school practical effects, and cute little Paulina “Gotham/South Of Hell” Singer make this a winner.