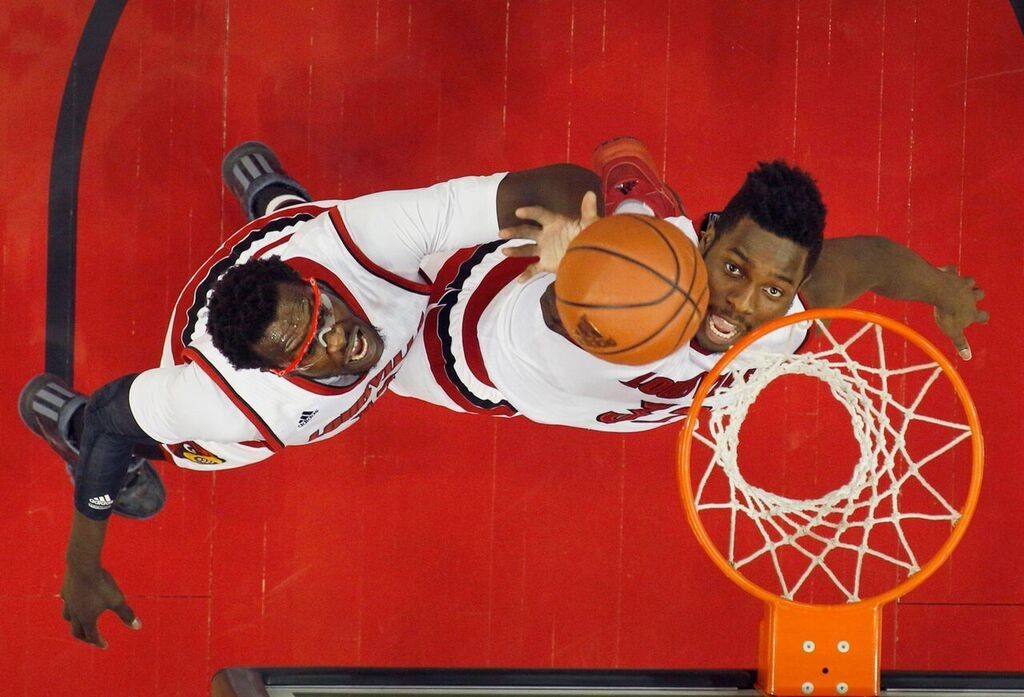 Ashley: I’m beginning to think that this Louisville team wants to be dubbed the Cardiac Cards … again. I was all ready to change my projection of 8 losses going into the ACC tournament to 5 losses or less … and then the Clemson game happened. I have to say that this particular road loss took me back to the frustrations of last season and the offensively-challenged team Louisville was … the team that dropped random games they had no business losing. I thought to myself: for sure Louisville learned from the UK loss that you cannot spot a good team a double digit lead at home and expect to battle back in the last five to seven minutes.

Ok, now that I have that out of my system, the bounce-back performance against Pitt was exactly what this team needed … A solid win against a legitimate top-25 ranked conference opponent. Defensively, Louisville looked as good as they have all season, holding Pitt to 41 points when they average close to 80 points, and have only scored less than 70 points one other time. Additionally, Louisville held Pitt to season lows in points, field goals, field goal percentage and assists. While this victory over Pitt is the most recent and feels the most impressive, the Louisville defense has held its opponent under 30 percent from the field, five times this season. This is something that I’m sure makes Coach Pitino very happy, and it will surely come in handy as the road to March Madness continues.

What we’ve learned so far in ACC play is that there will be no “off games.” As Clemson taught both Louisville and Duke the hard way this week, rankings mean nothing in the ACC. Any team can knock off any other team on any night. That’s a lesson I hope the Cardinals take to the bank. Next up, after a six-day break for Louisville, is Florida State, a team that has been ranked in the top 25. This game will feature a matchup between four high-profile guards who are all new to the ACC but are all making a lot of noise. Florida State has two freshmen guards, Beasley and Bacon, who both rank in the top 12 in scoring in the ACC, and Louisville, of course, boasts Lee and Lewis, graduate guards who have essentially had their way all season — another matchup of youth versus experience in another late night home game for the Cardinals.

This should be a high scoring game with the defensive edge leaning heavily in Louisville’s favor. I will also be watching for Onuaku’s performance against FSU’s 7-foot-3-inch center. As you all know, I’m always hard on the big guys, and this game will be a litmus test for each power forward or center in a Cardinals uniform. How do you respond and produce when you aren’t the biggest guy on the court? It will surely be an exciting game!

My prediction is Louisville by 15 or more points. Go Cards!

Aaron: For one frustrating Sunday, one week ago, I was beginning to worry about the Cards. It was the first troubling signs for a team that was, to that point, 6 points away from being undefeated. (Now they are a total of 10 points … 10! Only four possessions from being undefeated!)  Clemson, a team that came in with six losses including blowouts at the hands of Georgia and Massachusetts, absolutely dominated the Cards for most of the game. In particular, for the first time all season, a team showed that they could completely grind Louisville’s offense to a halt.

It was unnerving to watch this happen to a team that I regard as one of the best in the country.

As it turns out, Clemson was not the pushover team they appeared to be before tipoff, and  Louisville was just the first of three straight top-25 Clemson victims, followed by wins against ninth-ranked Duke, and eighth-ranked Miami.

The good news is that Louisville battled a comedy of careless errors and their worst shooting performance of the season, and still had a chance at a furious rally down the stretch. The Cards dominated the glass once again, out rebounding the Tigers by 22 (53-31), but couldn’t overcome 17 turnovers, and 35 percent shooting from the field (and going 3 for 23 from 3-point territory). The other big difference — and I am not blaming the officials — Clemson shot 44 free throws to Louisville’s 16. A decent number of those had to come when Louisville was fouling late to extend the game, but either way, Clemson outscored Louisville by 21 in foul shots alone (32-11).

Ultimately, like I said back in November, there will be frustrating games the Cards will lose in January. The Clemson game appeared to be just that; where the the Cards were thrown off their game, loose balls bounced the other way, and shots just didn’t go in. The great silver lining about that loss is that it seems like the Cards still don’t have a bad loss on their schedule. It’s not one you’re comfortable with, given so many heavyweight teams coming up, but the ACC is tough, and so is the road.

The Cards followed up the Clemson loss with a very impressive win against Pittsburgh. The performance last Thursday night was a brilliant display of a team that was well-prepared with a perfect game plan for the opponent. Obviously you can’t tell everything about a team from one or two games (otherwise there is no way the UCONN team that couldn’t keep it within 40 against Louisville a few years back goes on to win a national title), but Pittsburgh looked like the weakest opponent Louisville has yet encountered in the ACC. They showed no ability (or interest for that matter) to play from outside of four feet from the basket, which resulted in a dominating defensive performance from Louisville’s bigs, particularly Onuaku, Mahmoud and Spalding.

The biggest concern going forward, though, is for the second straight game the Cards couldn’t hit the Ohio River if they were standing on the new Lincoln Bridge. They followed up their 3-for-23 performance at Clemson, with a 1-for-11 three-point-shooting night, bringing the two-game total to a putrid 4-for-34 (11.7 percent). I’m beginning to hear echoes of Pitino’s past, that they are not even shooting in practice because they’re only working on defense. I’m not arguing the strategy, and I do hope that this is the case rather than, say, UofL shooting coaches messing with this talented flock of Cards.

As Cards Nation turns to Wednesday’s game against Florida State, as well as Saturday at Georgia Tech, look for them to be well prepared once again. Different opponents call for different game plans and result in different players stepping up, and this team has the versatility to play any style the game calls for. That was one of the amazing characteristics of the 2012 National Title Kentucky team — they could beat you at whatever game you wanted to play. For instance, two games before grinding out the classic game against the UofL in the Final Four, one in which they couldn’t break 70 points, they dominated a frenetic Sweet Sixteen game against Indiana (a team they lost to three months earlier), winning 102-90.

This UofL team isn’t that team, but it has that same versatility when it comes to size, athleticism and offensive and defensive abilities. I just hope the offensive potential just took a two-game hiatus, because it is going to be needed, as seven of Louisville’s last eleven games come against ranked opponents … before the ACC tournament.