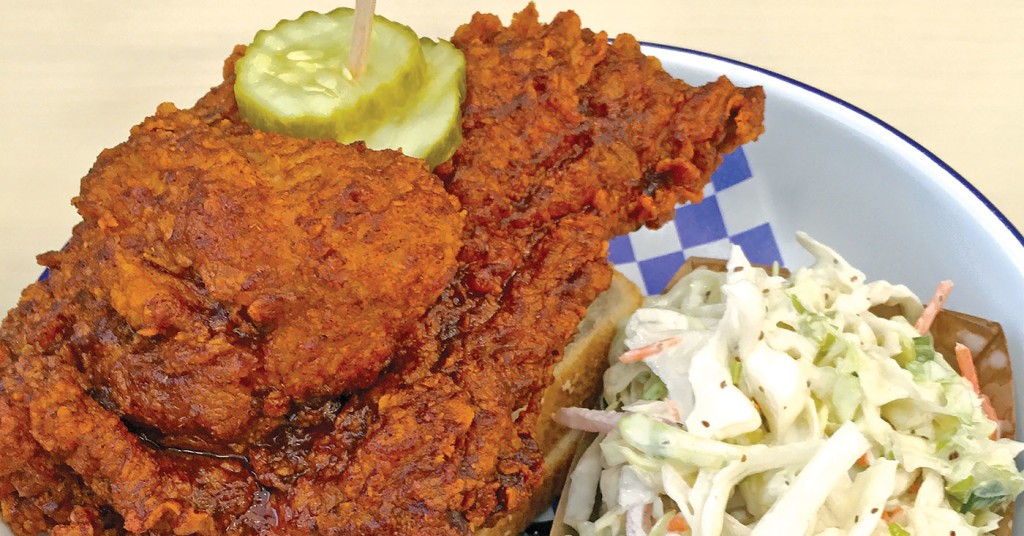 Mary took a bite of her Royals hot chicken, and wrinkled her nose.

I pried off a slab of the crunchy, crackly reddish-brown crust and tried it. Mm, mm good. It was spicy but not fiery, as ordered. Tastes like chicken. And complex spices, not too hot, as ordered. I didn’t pick up any sugar to speak of, other than maybe as one note in a flavor symphony. It was delicious.

She agreed about that. Delicious indeed. And juicy, tender-but-firm chicken, too, not falling-off-the-bone overcooked but textured and fresh. But she just plain doesn’t like sweetness in savory dishes. Save it for dessert, says she.

More for the rest of us, say I.

And make no mistake, Royals is good. Located in the quarters vacated a while back by Taco Punk, it’s been neatly re-done in simple, basic white — rows of tall tables and stools line the center like a regimental dining hall (with great chicken); large booths with hard, picnic-table-style slatted seats surround the perimeter.

Line up to your right to place your order, get a number to put on your table, and pull your choice of soft drink from a cooler case or self-serve fountain. (An impressive selection or 24 craft-beer taps is coming soon.)

Hot chicken, as you’ve surely heard, has spread out from its roots in Nashville, where it’s such a big deal that the Music City even throws an annual Hot Chicken Festival every Fourth of July. Now going national, the hot chicken craze has spread to Atlanta, New York City and Portland (of course). And to Louisville, with Joella’s and now Royals.

It takes basic Southern fried chicken and ramps up the heat via a combination of brine, dry rub and marinade, yielding a chicken with a bite. This bite, depending on how you order it, may range from a gentle gumming to a firm chomp to the culinary pit-bull mauling that is Royals’ “Gonzo,” its  heat achieved via three of the world’s hottest peppers: Carolina reaper, Trinidad scorpion and Indian bhut jolokia ghost peppers.

We got there around noon on a very chilly day, and found about 20 diners ahead of us in line already. But we persevered, studying the short, tantalizing menu. It’s pretty much all chicken, all the time, unless you prefer tofu. To the delight of those who shun animal flesh, Chef Ryan Rogers provides the same option here as he does with his popular Feast BBQ shops in NuLu and New Albany: Carnivores can chow down on quality bird (not local free-range but, Rogers says, antibiotic and hormone-free); veggie-vores are offered the option of organic tofu dressed up just like the chicken.

Chicken plates range in price from $8.50 (for a dark-meat quarter or Nashville hot tofu) to $14 (for half of a chicken). These are large birds, Rogers says, chosen to ensure that they can be pressure-fried Colonel-style without overcooking. A fried-chicken sandwich or chicken-salad sandwich is $8, as are sizable iceberg-wedge or kale-and-bacon salads. Sides are house-made from quality, locally produced ingredients. Meals come with one side; an extra is $2, or a la carte sides are $3.

Fried pies or soft-serve ice cream desserts are $3, and milkshakes — excellent antidotes for overdoses of spicy fire — are $5 to $6.

Just as Rogers said, our white-meat quarter plate ($9.50) featured an oversize hunk of tender, juicy breast meat, wing attached. The crust was crispy and crunchy and not terribly greasy, although a bit of tasty, spicy grease is apparently part of the Nashville thing.

Southern-fried tofu ($8.50) makes a great way to experience Nashville hot chicken without any animals being harmed. Four squarish logs of firm, fresh tofu were cloaked in Nashville-style coating, crisp and crunchy. We ordered it “hot,” which is actually only midway in the heat hierarchy that goes on up to “X-Hot” and the aforementioned “Gonzo,” but this was plenty hot enough, producing a buzzy endorphin rush without actual pain.

Sides were all fine: Slaw was thick-cut, with poppy seeds, grated carrot and green onion in creamy dressing. Pimento grits were creamy, rich, cheesy and delicious. Cucumber salad was simple and pleasant, cooling cuke slices and red onion in a light, sweet-tart dressing.

Hot bacon-dressed kale salad disappointed us, though. Whole baby-kale leaves with stems were tossed in bacon grease and heavily loaded with bacon bites, cheddar, thin-sliced Granny Smith apple, and crunchy fried yellow-corn kernels. We understand that kale is superfood, hipster fare, and good for you. The bacon grease seemed to dominate the flavor, though, and the bacon bits were limp, with the funky scent that we associate with good country ham but that didn’t quite suit us in this context.

A delicious lunch for two, with plenty to carry home, fell just short of $30, plus a 20 percent tip handily calculated by the iPad register. Attentive and friendly service, typical of Rogers’ establishments, exceeded expectations.