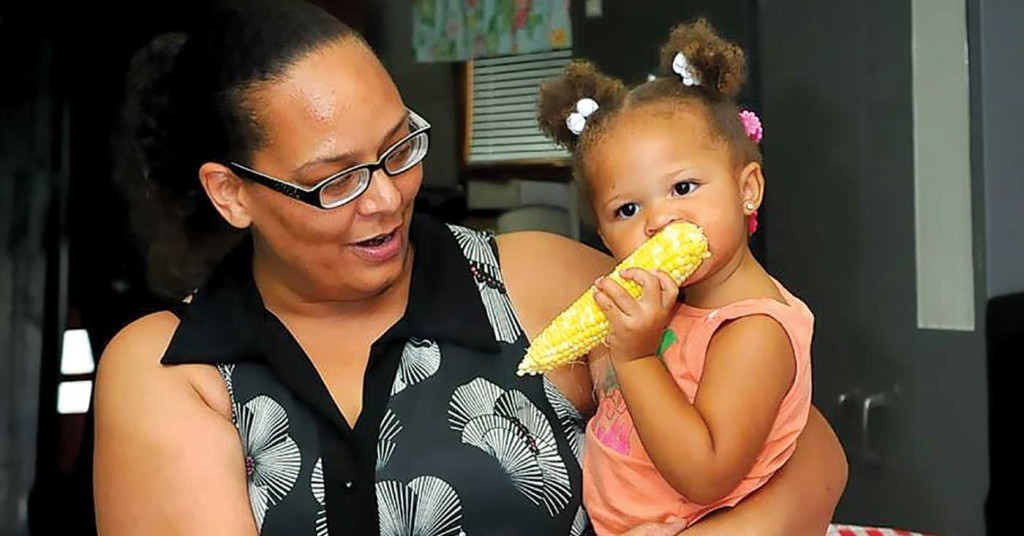 Food justice is often overlooked as a component of social justice, but many neighborhoods still ache from decades of geographic and socioeconomic segregation — even in the bustle of progressive cities like Louisville. Current food policies often prioritize full bellies over optimally nourished ones, leaving people hungry.

Karyn Moskowitz was once new to the idea of a “food desert,” despite creating one of the most successful farmers markets in a rural Indiana community without access to fresh food. To challenge food injustice in Louisville, Moskowitz called on her experience to launch New Roots, even while working full time as a single parent. Today, she’s a full-time advocate for connecting people with nutrition.

In a study conducted by the Union of Concerned Scientists, New Roots was recognized in Washington D.C. in 2015 among five prominent urban food initiatives that have sidestepped inadequate food policies. Patty Marguet, a New Roots board member and food shareholder says that the New Roots Fresh Stop Project is among “champion models of cities grabbing ahold of the problems with our food system.” All five, she says, are “coming up with a way around [problems] and sharing it with the rest of their communities.”

The result of the study is a report that notes the five cities’ characteristics, including race, income distribution, and prevalence of diet-related disease. Louisville’s statistics in high blood pressure (39 percent), diabetes (10 percent), obesity (29 percent) and childhood obesity (21 percent) should signal a public health emergency. For some of us, portions of the statistics reflect lifestyle choices. In low-income communities, these chronic health outcomes are caused by the deprivation of choice. Corner stores and fast food joints cause true hunger: malnutrition.

Nathaniel Spenser, a New Roots Fresh Stop market leader in the Shawnee neighborhood, grew up gardening in West Louisville. When he left at age 19, he says, “There were gardens, fruit trees, grapevines and everything.” Years later when Spenser returned, it was all gone, including the grocery stores that once sold fresh food. “When I was introduced to the Fresh Stop, it hit my heart more than anything else. I said, ‘We need this down in the West End.’”

Spenser became a leader of a new Fresh Stop at Redeemer Lutheran Church; its mixed congregation has been engaged with the community since the 1950s. “Our volunteers were from the community and that’s what this is about — the community becoming engaged and becoming leaders. That’s the strength of it by far.”

In the Union of Concerned Scientists’ report, Moskowitz describes a Fresh Stop as “a cross between a fruit and vegetable flash mob and a family reunion.” Spenser says a Fresh Stop is “the purest entity, movement, initiative. It’s just so good, all the way around.”

Spenser tells the story of Makeba Lee, a young mother killed in 2012 from an act of violence in one West Louisville neighborhood while Fresh Stop market shareholders held their strawberry festival in another. All of those at the Fresh Stop that day, including Mayor Greg Fischer, were devastated as tragedy disheartened their community celebration. Later, New Roots created a Fresh Stop program to honor Ms. Lee.

Through the Makeba Lee Fund, mothers receiving WIC benefits qualify to buy full Fresh Stop food shares for just $6. New Roots pays the balance of the share cost through donations to the fund.

Fresh Stops are similar to CSA programs, except shareholders pay bi-weekly instead of paying for the whole season in advance. Volunteer market leaders manage the bi-weekly shares, and then order seasonally available foods from partner farmers. Most unique about the program is that farmers receive a check in hand for 100 percent of the food they deliver. “We’re buying them out,” says Marguet. While farmers might be taking a reduced price for their produce, all the food picked for that day’s market is purchased. New Roots now partners with many farmers who grow solely for Fresh Stops.

The binding community connection is the food. All who invest in Fresh Stop market shares spend their time between market days cooking and eating the same foods from equal shares that were grown on the same farms, and paid for together. It’s unifying for everyone who participates.

“It’s really transformative,” says Moskowitz. “I can’t even remember my life before 2009.”

Now with Fresh Stop markets in Lexington, and markets forming in New Albany and Valley Station, New Roots is working to fund high tunnels to supply future year-round markets. Also in the works is a national Fresh Stop model to launch in 2017.

Moskowitz is a force of compassion and focused enthusiasm, working to eliminate food insecurity through activism over charity. “It’s a community driven initiative,” she says. “Everyone has the right to fresh food.” •

Rachel Hurd Anger is an urban farming writer living in Louisville. Follow her on Twitter @rachelhurdanger, and read her weekly urban chicken keeping advice at urbanfarmonline.com/chickenquarters.