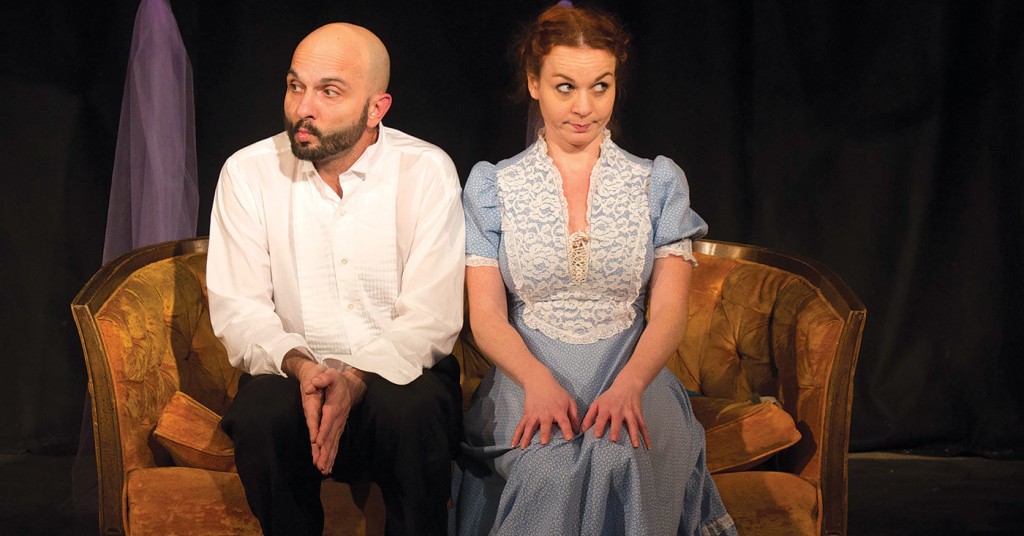 Gerry Rose and Polina Shafran in 'The Proposal.'Photo by Jasmine Jones, courtesy of the Chamber Theatre

Anton Chekhov, it seems, had a vexed relationship with his plays — or at least with the companies that produced them. His squabbles with the great Russian director and teacher Konstantin Stanislavsky were legendary. Chekhov asserted, for instance, that two of the works that became central fixtures of modern drama — “The Cherry Orchard” and “Three Sisters” — were farces rather than tragedies, and that Stanislavsky had ruined the plays by misconstruing his “jolly farces” as tragedies.

Be that as it may, it would be impossible to misconstrue the short, early Chekhov plays being presented by a new company, The Chamber Theatre, in a delightful production that opened last week at Vault 1031.

These tight little pieces — “The Boor” and “The Proposal” — can’t be mistaken for anything other than the comic vaudevilles Chekhov intended. And if this production is a harbinger of things to come, The Chamber Theatre, which focuses on early modern drama and is headed up by co-artistic producers Polina Shafran and Martin French, is going to be bringing some wonderful theater to the city.

Both plays are directed by French, and both feature casts of three — in some of the most jubilant, spirited comic performances you’re likely to see this season.

In “The Boor,” Shafran plays Elena, a widow who is now 11 months into her grieving — and who relishes her grief with operatic glee — because she views it as a kind of triumphant revenge for the wrongs she suffered from her philandering husband. Still, when her long-suffering servant Luka (Tom Pettey) urges her to return to a normal social life — and reminds her of her own beauty — Shafran lets just a bit of remembered light shine through the gloom in a subtly crafted but of face-craft that’s perfectly suited to the intimate performance space at Vault 1031.

Then comes Grigory Stepanovich Smirnov (Gerry Rose), a swaggering, strutting bear of a man bent on collecting a debt that’s been arrears since the Elena’s husband died. And a furious verbal battle ensues: think of it as a Russian antecedent of those Hepburn-Tracy scuffles. As the argument escalates, Smirnov finds some occasions for solo musings — and by the time he challenges Elena to a duel, it’s clear that he’s smitten with this formidable woman, which, pistols in hand, makes for something of a dilemma.

“The Proposal” finds the three performers in completely different roles. Now Rose plays Ivan, an effete, over-dressed, stuttering hypochondriac whose clumsiness leads to brilliant bits of physical comedy reminiscent of some classic silent movies. He has come to ask Stepan (Tom Pettey) for the hand of his daughter Natalya (Shafran). Pettey — the groveling servant of the first play — is now an imperious, confident, patronizing lord of his own manor. And he’s thrilled at the thought of marrying his daughter to the owner of the neighboring land. Shafran plays the daughter as a wily, witty lass who may be dressing for the country but who would obviously thrive in a more sophisticated environment.

Anyway, before Ivan can get around to proposing, he and Natalya fall to arguing the ownership of a piece of ground at the border of their properties. And about the relative merits of their two dogs. And about a host of other things. The arguments are devilishly funny, and so are the accompanying pratfalls — in fact, if Rose took up basketball, he’d likely spend half his life on the floor and the other half at the free throw line.

Clocking in at slightly under 90 minutes, this is a great piece of playmaking and well-suited to a week of Russian-style temperatures. •

Meanwhile, the Alley Theater, which just went through a management shuffle that basically involved long-time colleagues Scott Davis and Joey Arena trading some roles, with Arena now in the Artistic Director’s seat, it’s business as usual on the stage with one of those epic pop culture mash-ups that make the Alley such fun. This time the play is “The (Other) Boy Who Lived,” with a script credited to J.Gregory Sanders, Scott Davis, and the ensemble, and music and lyrics by J. Gregory Sanders, who also directed.

Folks who are accustomed to donning raincoats, sitting in the front rows at the Alley, and being sprayed with various liquids will be disappointed that there’s none of that this time.  Still, a script that brings together the magic wands of Harry Potter with the scheming machinations and high-stakes card games of James Bond, an occasional bit of comic raunch (the company cautions that there’s some adult content which may not be suitable for children), multi-media elements (Josh McNally, video and editing, with assistance from Becca Hamrin) and an eclectic musical score to boot (not least a bit of sultry cocktail lounge vamping from Luna Lovegood — aka Luna Galore, played by Devin Armbruster) — offers plenty of zany pleasures. Heck, there were times when mere mention of some aspect of Hogwarts drew happy laughs of recognition from the packed house the night I caught the play.

That night, there were some occasional pacing issues early on, but the second half barreled along, and the ensemble — Jacob Hall, Maggie Gardner, Jessica Walker, Spencer Korcz, Holly Wolak, Kenn Parks, Stephan Koller, Alex Hume and Kari Scharfenberger were in their element.

If ever there was such a thing as a popcorn-play (did I mention that the Alley concession stand has fresh-popped popcorn?), this is it. •