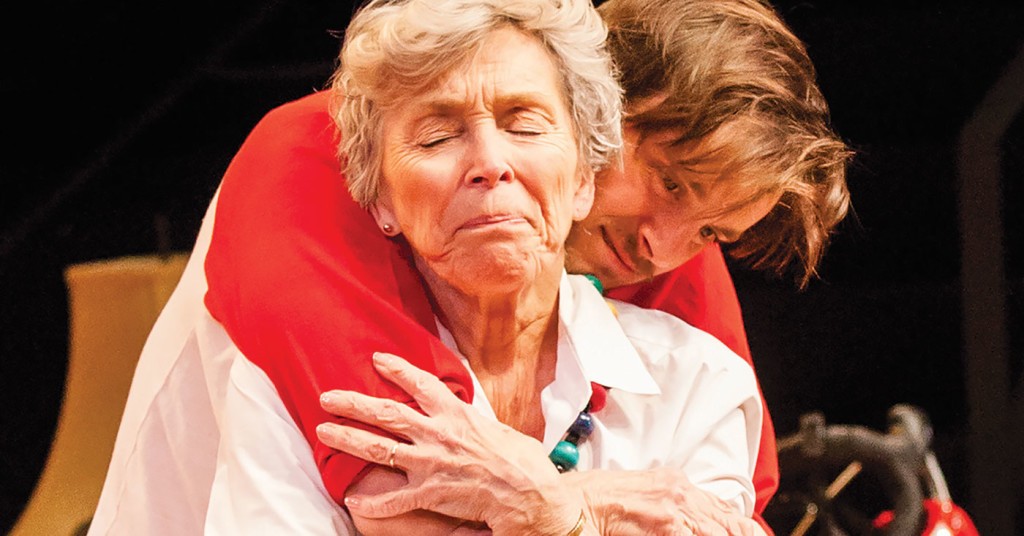 Dee Maaske and Michael Goldsmith in '4,000 Miles'Photo by Bill Brymer

It’s 3 a.m. when young Leo Joseph-Connell (Michael Goldsmith) rings the buzzer at his grandmother Vera’s apartment in Greenwich Village. He arrives on a bicycle heavily laden with gear and paneers after riding across the continent from Seattle.

And his first conversational gambit is to point out that Vera hasn’t changed the name on her buzzer — it still holds the name of her late husband.  “You should change it,” he says.  “It just seems like it’s time.” And with a big, ingratiating smile, he offers to help change it.

It may be 3 a.m., and she may be in her 90s, but Vera (Dee Maaske) understands that Leo hasn’t dropped by to offer his services as a handyman. “You need a place to stay, is that it?” she asks.

He has, after all, been totally incommunicado for months. And when Vera upbraids him for worrying his family, he responds with another gambit: He offers to leave. “I have a tent, a camping stove and a love of the outdoors,” he says. “I’ll be alright.”

To which Vera replies, “You’re in Manhattan.”

In this brief exchange Herzog deftly establishes the terms of engagement between this pair. Vera is a no-nonsense pragmatist. She’s an irascible, plain-spoken woman who’s lived through plenty and survived.

Leo, meanwhile, is in the process of living through things — but whether he’ll survive is an open question. His riding partner died during their cross-country ride, and he’s come to Vera’s because earlier in the night his girlfriend turned him away at the door.

“4000 Miles” plays out as a not-so-gentle study in the therapeutic value of intergenerational love and conflict. The structure is straightforward. Over the course of a few weeks, we see a series of loosely linked vignettes  play out as variations on the opening theme: Leo feints — Vera parries.

And although the stakes seem to grow greater scene by scene, Herzog, Director Mike Donahue, Goldsmith and Maaske maintain a rigorously disciplined tone.

Herzog’s script is rooted in closely observed natural speech and behavior — many of us have lived through and witnessed conversations much like these.

Donahue’s direction places much of the action in the seams of silence between speeches — in unusually long beats and pauses.

And both Maaske and Goldsmith offer masterful portrayals of masked and modulated emotions and misdirection. Goldsmith’s smile is as broad as it is empty of joy, and the granular details of Maaske’s well-calculated irascible compassion is a study in itself.

This sort of acting is perfectly suited to the relatively intimate, in-the-round setting of the Bingham Theatre, which scenic designer Dane Laffrey has turned into a cluttered apartment filled with books, magazines and other evidence of Vera’s leftist political leanings. And it’s a production that benefits greatly from Stowe Nelson’s superb sound design and incidental music and from Paul Toben’s lighting design, which wraps the stage in a sweet darkness during one of the play’s most emotionally telling moments.

It’s also a production that benefits from two other fine performances. At a couple of key junctures, Leo’s erstwhile girlfriend Bec (Justine Salata) arrives on scene, both times bringing a bracing energy that punctuates and illuminates the relationship between Leo and Vera. And there is a deliciously comic performance by Kristin Villanueva as a girl Leo brings home late one night — though I have to emphasize that although Villanueva is spectacular, the role is written as an ethnic and generational caricature that seems strangely disconnected from the rest of the piece.

And in the end, although Leo’s crisis precipitates the action, it turns out Vera, too, has undergone some changes. And if the world hasn’t been righted, it is at least spinning in new directions. •

Also, a reminder: ATL’s Acting Apprentice Company production of “The Tens,” eight ten minute plays, runs through Saturday. Tickets are free — but tickets are required and can be ordered from the box office or downloaded from the website.