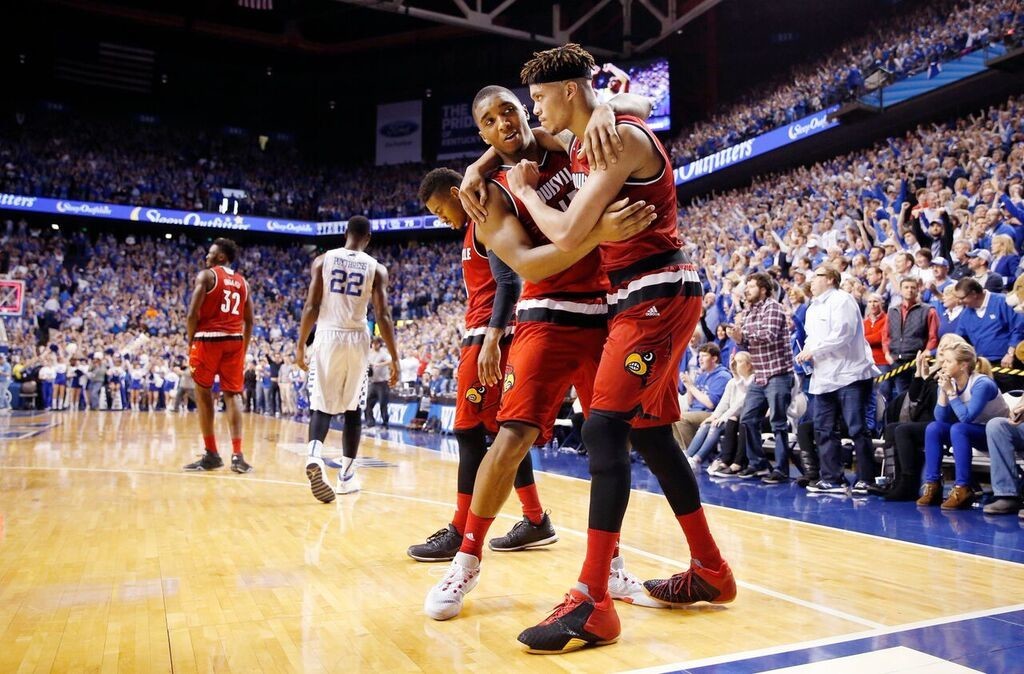 Aaron: I got the Kentucky Blues.

No, no. I was not hiding after the UK game. It just so happened that there was a holiday the day that weekly roundup would have been posted. I will stand here and face the music. To all the UK fans out there: Nice home win! (See what I did there?)

Seriously, it was a great game, and a heartbreaker for me and Cards fans. Someone told me they heard Pitino in an interview, when asked why this loss seemed to bother him more than in years passed, say, “Because this team has a chance to go all the way” (or something to that effect). To be clear, he is talking about his UofL team, praise that he rarely bestows on his teams — particularly in December!

The other reflection from the game is that Tyler Ulis was awesome. He was, without question, the best player on his home floor that day. (See what I did there?) Seriously though, it was an epic performance, and one that this game will be remembered for.

As for the rest of the game, Kentucky fans, in a moment of pure honesty, would have to admit they were terrified watching the seconds tick down on that clock — some probably praying the seconds would tick tick faster — once they went up 16 points, and there were 17 minutes left. For the last 18 minutes of the game, Louisville outscored Kentucky 37-23. For 18 excruciating minutes (for both fan bases), the Cards whittled away at the lead.

Forgive the digression, but it reminded me of Zenyatta, the brilliant thoroughbred who won her first 19 races, each time coming from way behind the lead. In her 20th and final race, the Breeder’s Cup at Churchill Downs, she came roaring down the stretch from 20 lengths back to lose by a nose. If the race had gone another 20 feet, she would have won going away. (Mike Smith, Zenyatta’s jockey, was inconsolable, helplessly crying at the press conference.)

The point is, had that game gone another minute, it looked inevitable that Louisville was going to win running away — perhaps even if they had another 5-10 seconds on the last possession.

Ultimately though, it felt like a classic UofL-UK rivalry game. Never comfortable. Never enjoyable. A true battle. UK made the biggest shots, and just enough of them. The Cards, and cards fans, have to tip their hat to the Cats … and, no, I don’t mean the one-finger Pitino tip.

Side note: I can’t believe how much people cared about whether or not Pitino gave some fan the single-finger salute. I won’t justify on his behalf or make any sort of excuses. I just want to know, is that really such an offense to people’s sensibilities? And was it just offensive to UK fans? It seemed like UK fans and the media were the only ones who seemed to mind … while of course, UofL fans were probably too depressed to care at that point.

UK seems like a good team, with a lot of good players — good, young players who could be great in the future. At this point, however, their success seems to depend on how far Ulis can carry them. Without his brilliance, this team of Cats is a middle-of-the-pack SEC team. The pregame report from a lot of the UK fans and media was that they were soft inside, which turned out to be mostly true as Louisville out-rebounded Kentucky by 10 (39-29). Only one other time since December 2006 has UofL won the rebounding battle. (Ironically, it was the Final Four game against Anthony Davis.) That’s once in 11 games!

I will say this on behalf of Cardsnation (#Cardsnation): While we lost that fight, we have every reason to believe that we have the better team. Consider: 1) Louisville had more foul trouble to deal with — starting center Onuaku and starting guard Lee in particular (and no, I’m not criticizing the officiating). 2) Ray Spalding spent the majority of the game looking like a freshman (although he came on strong late in the game), as did sophomore Quentin Snider. 3) The Cards couldn’t have played much worse for much of the first 23 minutes, and still had a shot in the air to win. And 4) the star of the whole afternoon, freshman Donovan Mitchell, showed that he is ready to make a difference on the big stage immediately.

So, although it feels like we just lost in March, we have every reason to believe the Birds will be the last ones standing.

To clarify for all the UK fans who have suffered through to this point — especially the three idiots: Scott, Mikey and Austin — there are a number of really good teams this year, unlike last year when there was UK, Duke and Wisconsin, then everyone else. I’m not saying UofL is the best team in the country, just that this team can play with anyone.

Nice home win Kentucky fans. (See what I did there?)

As for this week …

Wake Forest is a good basketball team. They didn’t seem to have one or two dominant players, but rather a team of really good players, all of whom play really well together. They took several good punches from the Cards, in the YUM! Canter, and still had it tied with 2:30 left. The Cards showed a lot of fortitude, closing on a 9-1 run (although they leaned pretty heavily on Wake Forest’s awful free throw shooting, 3 for 12).

Donavan Mitchell was awesome once again, going for 18 points and 8 rebounds. The highlight for Cards fans, however, had to be “Nanu” Onuaku, who went for 12 points, 15 rebounds and 4 blocks. He was a stud, looked like the NBA prospect that we’d be hearing rumors about.

The NC State game was a completely different team — loaded with individual talent, but played some version of collective chaos. The whole game was crazy, but Louisville always looked the superior team. So despite the frenetic pace, and roller coaster runs, the game never truly felt in doubt. Personally, the only time I started to get nervous was with 16 seconds left, up three, when 90 percent free-throw shooter, Damion Lee (second in the ACC), went to the line and missed two. Fortunately, after a nice defensive stand, he redeemed himself, and iced the game with two free throws.

Here again, Onuaku was awesome, carding another double-double with 12 points and 14 rebounds. The biggest difference this time was the hot hand of Quentin Snider, which contributed four second-half threes, and 21 points on the night. It was also awesome to see flashes of the raw athleticism and talent from the sophomore forward Jaylen Johnson. Including a Montrezl-esque dunk, he had a big night, going for 8 points and 7 rebounds in just 21 minutes. Also of note, my man Ray Spalding — in his first road ACC game, he showed what a miserable matchup he can be for teams, finishing with 12 points in 19 minutes.

This game was a perfect example of the number of ways this UofL team has to win. Nine guys contributed substantive minutes, and there was production from every position.

There will be tougher opponents, but every conference win you can steal from the road is an important win.

Ashley: The last couple of weeks in Cardinal basketball was all it was hyped up to be…two impressive victories, two solid conference wins and of course, the heartbreaker against Kentucky, which we gave a week to let it simmer.

I will start with the heartbreak and get it out of the way. It was a perfect storm for Kentucky; as a team they shot almost 50% from both the field and the 3 point line, something they hadn’t been close to all season. Tyler Ulis, for the second year in a row, was locked in, and on fire. While I do agree that the referees made some questionable calls on both ends and missed others all together, Louisville could have helped themselves a little more.

I hate to go back to the free throw conversation, but as I’ve said multiple times this season, missing the freebies will cost Louisville close games. Louisville lost to Kentucky by 2 points, while they missed 7 free throws during the course of the game. Beyond this, only 21 points of the 73 scored by Louisville were from the big men — 10 of which came from Onuaku. As the season progresses, the inside guys will need to produce more in order to take some of the pressure off Lee and Lewis; otherwise they will be far too easy to scout and defend. While I did feel that Kentucky got a few too many offensive rebounds in the contest, Louisville won the battle of the boards by 10.

The highlights from the game for me were Mitchell and Matz. Donovan Mitchell was once again a spark off the bench, and contributed 8 points, 5 rebounds, 3 assists and had only one turnover in his 21 minutes. After a non-productive performance from Quentin Snyder, I would have nudged him out of the starting lineup and replaced him with Mitchell … he’s earned it and continues to earn it in my opinion.

Matz Stockman has grown on me tremendously. I think he still has some work to do on his overall game, but he is big, strong and aggressive; three things you cannot teach. There were several times in the Kentucky game where he got down on defense in the post and forced difficult shots because the guy couldn’t get around his wide base or shoot over his long arms. Matz has a very nice touch on the ball for a big guy and I’d love to see him play more. The more in-game experience he gets, the more confidence he will have, and the more people we will see get dunked on in the coming months!

Lastly, I must say that although it would have been great to hit a game-winning three in the final seconds, and end the game with a one-point victory in Rupp Arena, I would rather have seen Lee go to the basket and take his chances on scoring and getting fouled.

But we must move on … we’ve had some time to lick our wounds. It’s officially conference time and as usual, the ACC will be brutal. The first two games against Wake Forrest and NC State each presented their own Litmus tests for the Cards. Fans should be excited about the potential of this team because they truly have the arsenal to beat anyone. It was very impressive to see that if one player got into foul trouble early, other players could step and carry the team to victory. I must give kudos to Quentin Snyder for the best game of his college career against NC State, but I still give the overall nod to Mitchell because of his consistency and defensive intensity.

Going forward, my starting lineup would be as follows: Trey Lewis, Damion Lee, Donovan Mitchell, Jaylen Johnson and Chinanu Onuaku. This lineup is Louisville’s best defensive lineup, and in the last several games were the five on the floor when Louisville was running on all cylinders. Sunday on the road against Clemson and Thursday at home against Pitt will be challenging, but I think Louisville wins both games comfortably (by 10 or more points). I’m still happy with where this team is right now. It still makes me laugh to think that they were picked to finish seventh in the ACC! Although they tend to let teams linger too close at times, Louisville is getting better every game and learning from their mistakes. Although we didn’t get the annual bragging rights from the Battle of the Bluegrass, Louisville will be a force to be reckoned with come March … mark it down!