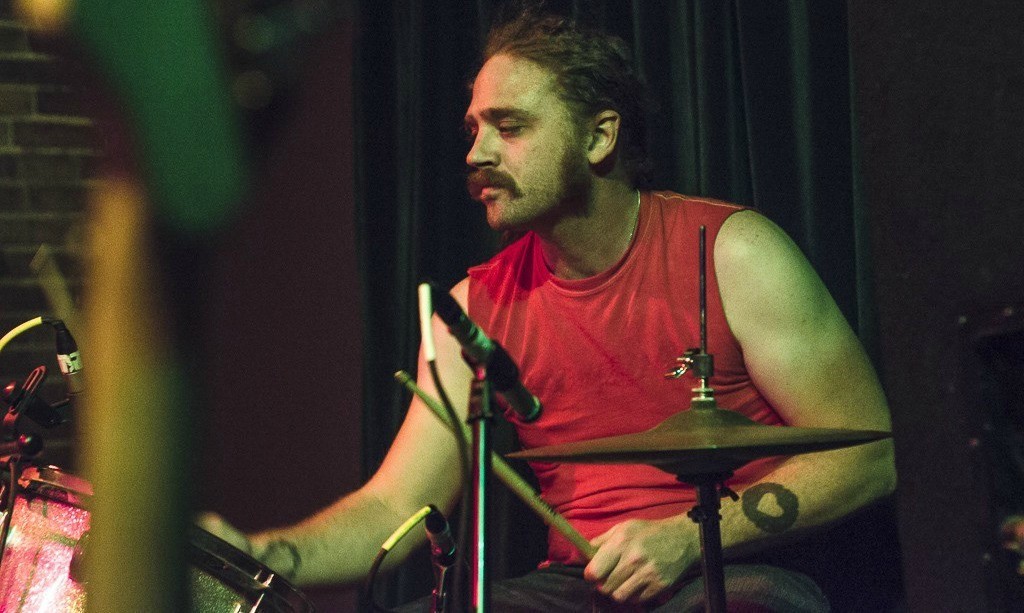 Defining Five is a series at Haymarket Whiskey Bar, where, each month, four people/groups from the Louisville music community pick five songs that have moved, inspired or impacted them and then play them during a DJ set. After each event, LEO Weekly will publish an interview with all four people/groups to get some context as to why each song was selected. ( Stay tuned to Haymarket’s Facebook page for updates.)

“What Am I supposed To Do”
by A Flock of Seagulls
from the album “Listen”
“It was a song that really introduced me to deep cuts  — that bands didn’t have just one-hit wonders, they had actual albums, with songs other than the hit.”

“The Evidence”
Lungfish
from the album “Pass and Stow”
“I like it because it’s just vocals and guitar and they, generally, are a band. They rarely do that. They are one of my all-time favorite bands also.”

“Ice”
by Daniel Lanois
from the album “Acadie”
“It was a song that got me into listening to ambient music.”

“Deviled Egg”
by Danielson Famile
from the album “Tell Another Joke at The Ol’ Choppin’ Block”
“I picked that song because it was sort of the intro to weirdness. When I was really young, I wasn’t allowed to listen to secular music and so I had to listen to the alternative Christian music and Danielson was there for me, and they were pretty crazy. So I could identify with them, when I was a young buck.”

“Porcelina of the Vast Oceans”
by The Smashing Pumpkins
from the album “Mellon Collie and the Infinite Sadness”
“It’s was hard to pick a song off that album, because it’s probably my defining album, but that one really embodies the sound, the production, of the whole album. It’s really beautiful, it’s epic and big.”

“Liberation”
by OutKast
from the album “Aquemini”
“The song just speaks to me. The groove is really great, but, the lyrics: It’s about having the choice to be who you want to be, and you can’t worry about what other people think. It’s about how liberating it is to be yourself and I think that’s important.”

“The Stallion Pt. III”
by Ween
from the album “Pure Guava”
“It’s one of my favorite songs of all time. I like the lyric, “I am the one who controls the sun.” Other than that, I have no idea what that song’s about. It’s completely absurd. But, for some reason, it moves me in a way that no other song can.”

“Impossible Germany”
by Wilco
from the album “Sky Blue Sky”
“To me, it’s just a perfect song. The opening guitar riff is really pretty and then it ends with a really huge guitar solo and I’m a sucker for dual guitar solos — and it has the two harmonizing and a third in the background just going crazy. It’s a solid, big-sounding, beautiful song.”

“Minerva”
by Deftones
from the album “Deftones”
“When I got into music originally, I was listening to terrible music, and Deftones was my gateway, I suppose, into music that is a lot more atmospheric, music that actually has meaning behind it, as opposed to the stuff that I had been listening to.”

“Small Change”
by Tom Waits
from the album “Small Change”
“Tom Waits is my favorite singer-songwriter of all-time, especially during the ’70s jazz period, every track he paints this vivid picture that you can see. He’s easily one of the best storytellers of all-time, and he chooses his words really carefully and I like how he remains an enigma — he’s always been an enigma, so you believe him. With ‘Small Change’ it’s a murder and everybody is a witness … and not just people — the marquees, the mannequins, the gumball machines, his headstone. You get this image in your head every time he says a word and it’s beautiful.”

“My Ma”
by Girls
from the album “Father, Son, Holy Ghost”
“Girls was a short phenomenon. They only had two albums, but what I love about them is that you can take even the heartbreaking lyrics away and you can still feel the message that they are trying to convey. You can feel everything about their music, from the way they make the guitar weep to the bass carrying the song to the haunting background gospel vocals. I challenge anybody, really, to listen to a Girls album and not be moved by it.”

“Archangel”
by Burial
from the album “Untrue”
“Burial is how the Kindred DJs got their name. He’s got a song called ‘Kindred.’ What I love about Burial is that he’s one of the current artists that continues to progress — everything that he does is brand new and completely different from the last thing that he did. That inspires me, along with Chris and Kindred DJs. We want to constantly grow. We don’t just want to spin vinyl. We don’t want to be sole entertainers. We want to grow. We want to see what this turns into.”

“Losing My Edge”
by LCD Soundsystem
from the album “LCD Soundsystem”
“When I heard that for the first time, not only did I immediately take a liking to James Murphy, and the fact that he is a true underdog — he was a 40-year-old man making dance music, which is unheard of —it has the message that he is trying to get out: that he is losing his grip on the cool happenings, he’s an aging hipster, unable to keep up anymore. But, what I took away from it, is it is a music history lesson in an entire song. I learned about so many artists and bands through one song that helped me grow … and the fact that it can start out as this simple beat and turn into a gigantic, awesome dance song.”

Palace Brothers
“I Am A Cinematographer”
from the album “Days in the Wake”
“At the end of the song Will Oldham says, ‘If you were alone, you could walk away from Louisville.’ And as a young 19-year-old, I took that very seriously and went to California and realized my people were here and not there and ended up hitchhiking from Mexico to Canada just to get out of California. Should have realized at the time that I shouldn’t take songs so personally. But it took a while to learn that lesson.”

“Just Be Simple”
by Songs: Ohia
from the album “Magnolia Electric Co.”
“That song came after a very difficult breakup with someone and I was having a lot of emotional distress and, actually, someone, who I didn’t know personally, who was a fan of Louisville is for Lovers, would send letters periodically, tried to convince me to use music as homework. I always thought that certain songs mean a lot because you can relate to that emotion that’s in the song and you feel less alone. And I was interested to find songs that represent what I was going through. And ‘Just Be Simple’ was one of those songs.”

“Leave The City”
by Magnolia Electric Co.
from the album “What Comes After The Blues”
“A couple of years after the breakup, I was still having issues. This song helped me come to terms with that I do love this city and I’m engrained in the city, but it’s time for me to take a break. And I went to Eastern Kentucky for five years.”

“Ain’t So Lonely”
by Lucero
from the album “Tennessee”
“Common knowledge: Years and years ago, I had to walk away from drugs and alcohol and grow up and be a big boy. And, for a brief moment, I relapsed — and that song made me think that I could do that easily without causing too much trouble. There’s a line, ‘Cold coke and pills on a long drive home and I ain’t  so lonely.’ There’s another line: “It’s been awhile since I was 19, it’s been awhile since I’ve seen myself act like such a fool.’ And I was like, ‘It’s maybe time I take a little break from responsibility.’ Boy was that a mistake.”

“Rollin’ and Tumblin’”
by Babyface Leroy Trio
“I heard this song in different incarnations many times, but this version is so different, not only in that it convinced me to learn how to play the harmonica, but they don’t sing any of the lyrics; instead they howl out the sounds of the words. It was so bizarre to me, and it made me realize at 13 or 14 that genre is only a slight road map, but you can go off the road.”