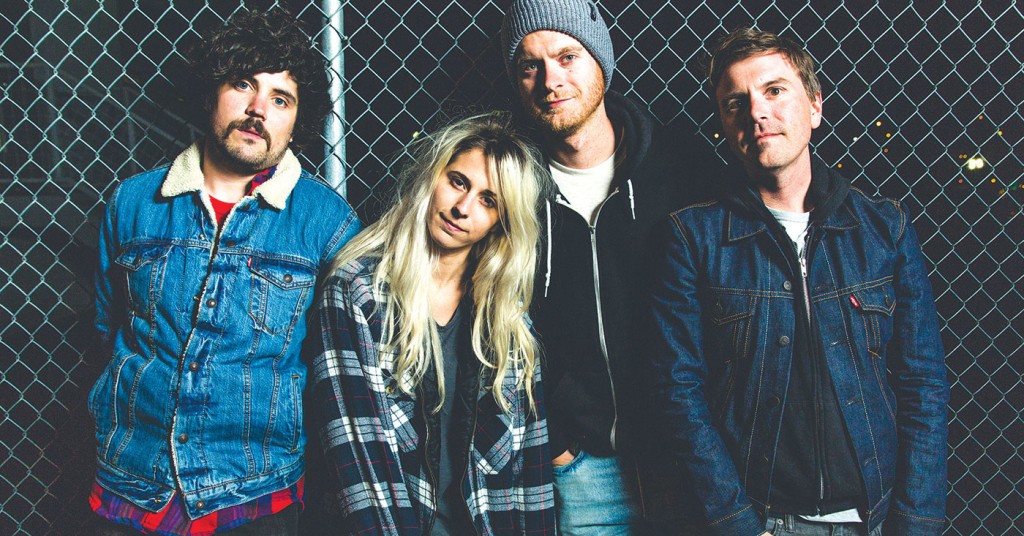 There is an electric kind of energy in the music of Bully that manages to be positive and aggressive, without ever coming off as saccharine or trite. The band captures that mid-’90s grunge feel, imbuing it with a freshness that transcends the genre. They’re fun to listen to and singer/guitarist Alicia Bognanno perfectly encapsulates that gleeful vitality with a spirit that lights up the room. Speaking with LEO at breakfast time on New Years Day, Bognanno was endlessly upbeat and content to talk about her music, time on the road and recording experience in that way that conveyed the joy of discovery and invention that makes anyone want to be in a band.

Bognanno’s earliest fumbling with music started off tentatively enough, with a foray into electronics and computer-generated sounds — a hobby initially.

“When I was little, like in high school, I was gathering around with the electronic side of things, like working with loops in Logic,” she recalls. “Prior to that, I used to write vocal melodies and stuff, but I couldn’t really play anything. When I went off to college, I had a lot of friends that were musicians and who played music. My old roommates had electric guitars and stuff, and that’s how I started playing guitar.”

From that point Bognanno was hooked. She spent time in Chicago as an engineer at the acclaimed Electric Audio studio, where she interned for some time, before ultimately moving to Nashville. Bully was the natural culmination of her work with guitar, and became an immediate priority: “When I started Bully, it was something I’d wanted to start forever. I just didn’t know how to go about starting. When I moved to Nashville, I had all the tools there. Yes, we did have goals. We didn’t have a sound that we were particularly aiming for, but in terms of putting out albums and touring, those were definitely goals we wanted to achieve.”

Bully spends a lot of time on the road. But Bognanno is a professional and has cultivated her easygoing personality into a lifestyle on the road.

“As soon as you leave, you kind of have to learn to be an easygoing person,” she says. “You really have to pick your battles, because it’s just not worth setting a bad tone — you’re in such short quarters with so many people. You just have to roll with the punches. At the end of the day, if you don’t have a good show, you’re like ‘goddammit, I just drove 8 hours to be there, why am I doing this.’”

Bully is ever optimistic to find new and different places to perform.

“We all really want to go to Japan and that hasn’t happened yet,” Bognanno says. “We’re going to Florida, we’ve never played there before, and we’re playing in Hudson, New York. I think Japan is the one that we talk about in the band and try and bug our management about.”

Splitting her attention between singing, playing guitar, and monitoring the crowd, Bognanno is a bit of a punk rock conductor. As to her challenges in a live setting, she notes, “I would say that the biggest responsibility is to stay positive in a live show. Someone is going to fuck up. The sound guy … all the sudden your vocals cut out … but the most important thing to do is to stay positive. I also think that as a front person, since you’re listening to everything else, so if something is sounding weird … you just accidentally have a microphone in front of you.”

It all comes down to having fun.

“For us it’s just a personal thing, like if we personally think that we play well,” Bognanno says. “Obviously, I want the people that came to like it, but if you feel that you nailed all your parts and had a good time that’s important. As long as everybody feels good about how they played, that’s a good show.”

You can catch them tomorrow night with Chicago rockers Fake Limbs, and the garage-pop madness of Brenda at Zanzabar. •