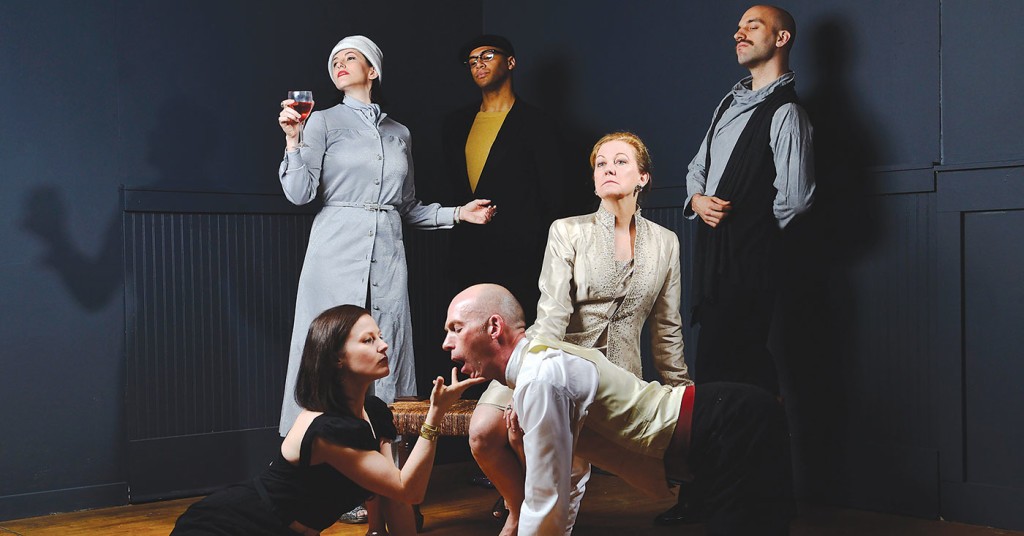 This week the internationally acclaimed Stuart Pimsler Dance & Theater (SPDT) is coming to Louisville for a 10-day residency. Funded through the National Endowment for the Arts, SPDT will offer Louisville a variety of workshops and talk backs, several open to the public. The residency includes a public performance from the full company at the KCA’s Bomhard Theater.

Founded in 1978 by Stuart Pimsler, SPDT repertory is a blend of dance and theater. The company started out in New York, then moved its home to the Twin Cities in the early 2000s.

Starting in the mid ’90s many of their community workshops began focusing on integrating movement and theater techniques into the healthcare industry. Many of their workshops in town will focus on this healthcare aspect. They’ll visit the UofL School of Medicine, Frazier Rehab, as well as its pediatric wing, and the VA Hospital.

“We began our work in healthcare in 1992, and it actually was not with any foresight,” said Suzanne Costello, who spoke with LEO by phone.

Costello, who became co-directer of the company in 1984, said the company always keeps an open mind when booking workshops: “As we tour we say we like to work with as many communities as possible.” SPDT had the chance to lead a  workshop with caregivers at the University of Florida Gainsville. “Out of that came ‘Caring for the Care Giver,’ which we’ve now done all over the world,” Costello said.

Costello explained the healthcare workshops as being twofold. “One is about really getting the caregiver to look at self care, because the burnout is intense. How can you practice what you are dedicated to, but still find time for yourself?” In addition to helping the physicians tend their own health, SPDT is looking to change the way healthcare is approached. “The other aspect is to really start to realign the paradigm of patient caregiver relationship, looking at the whole person rather than the person as an illness or a disease. Engage with the person as a person first and foremost, and the disease or illness or symptom as a secondary thing,” Costello said.

In addition to working with healthcare providers and students, SPDT will also work with students at the Youth Performing Arts School, Lincoln Elementary, Westport Middle School and ArtsReach.

Much of SPDT’s extended residency is focused on particular populations, but several events are open to the public, and many of those are free.

On Sunday the company offers “Theater for the Heart and Mind,” two workshops that explore SPDT’s approach to movement. Costello says these workshops are open to all skill levels. The workshop is free, but space is tied to 40, so reserve a spot. The 2 p.m. workshop was already full at press time, and the 3:30 p.m. workshop was filling up fast.

On Monday at 6 p.m. at The Tim Faulkner Gallery, the company hosts “Artist as Citizen,” a community conversation aimed at socially minded artists.

For their Kentucky Center performance SPDT will present four works: “Tales from the Book of Longing,” “Type-A Romance,” “Men from the Boys,” and “Bohemian Grove.”

“Tales from the Book of Longing” is inspired by the poetry of Leonard Cohen. “We were investigating what’s the difference between longing and desire. Is one about something you wish you had, (and) missing what you used to have?” said Costello. She calls the process of creating work for SPDT “investigating” and says, “Most of our work investigates human relations in all its forms.”

A tandem exploration of the poetry by Cohen is being offered in a collaboration between the Kentucky Center for the Arts and McQuixote Coffee and Books, who will host “The Book of Longing: Letters to Leonard Cohen” on Thursday at 7 p.m. The evening features local poets responding to the work of Cohen.

“Type-A Romance” is a duet that explores love among the corporate set, inspired by women that Costello used to see in New York. “We lived downtown in SoHo, not far from Wall Street; there’d always be this sort of parade of people going down Broadway and a lot of women would wear sneakers and have their other shoes in their briefcase. That image stayed with me.”

“The Men from the Boys” explores the competitive relationships between men. “It starts off very comedic, and depending on the audience, it’s comedic almost until the end. It’s a witty piece but it also has a dark turn,” said Costello.

Rounding the evening out is an exploration of the powerful elite and the one percent in “Bohemian Grove.” “Bohemian Grove is an actual place,” said Costello. “It’s in north California, and it could be described as a summer camp for the rich and powerful. It’s been in existence for over a hundred years. Nixon was a regular if that gives you any idea.”