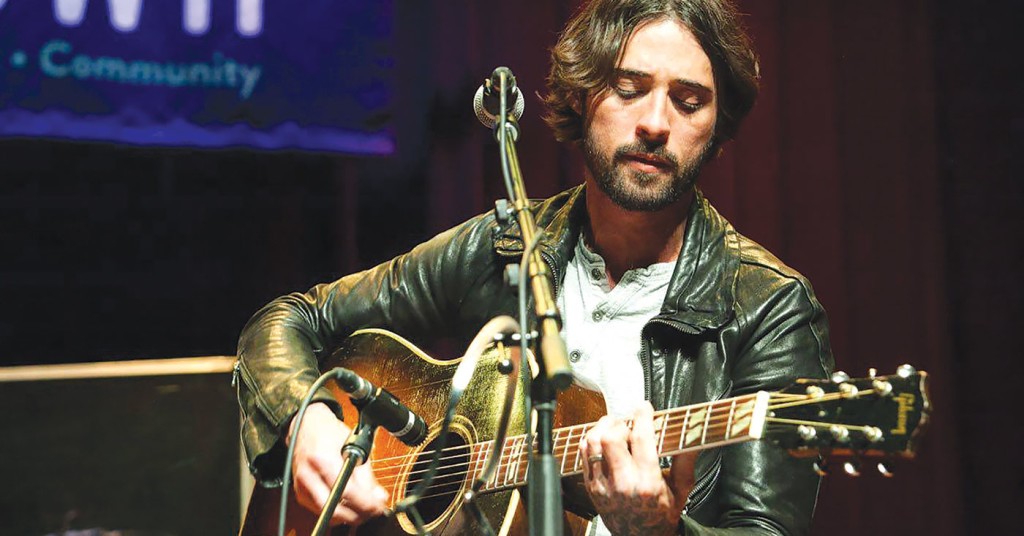 From deep Southwest drifter to Oscar winner to recent fatherhood, Ryan Bingham has packed a few lifetimes into his decade or so of being a studio musician. And his discography captures these chapters, reading like a fast-moving and surreal novel, from documenting his hard-traveling days with the lesser-known Americana cult classics  “Mescalito” and “Roadhouse Sun” to walking the red carpet for writing the song “The Weary Kind” for the award-winning, Jeff Bridges-starring film “Crazy Heart” to discussing his parents’ alcohol-related deaths on “Tomorrowland.” Which brings us to this year’s “Fear and Saturday Night,” which veers toward happiness, acting as a love letter to his wife, a reflection of the past and a few pieces of advice for when his child grows up. LEO caught up with Bingham before he plays Headliners this weekend.

On the themes of “Fear and Saturday Night” and how it’s different from previous records.

“It’s definitely kind of on a lighter note. I had a few rough years, when I was writing records like ‘Tomorrowland.’ I definitely feel like it’s a different chapter of my life. It’s kind of a different mindset. I’ve always written songs in the same kind of vein — really just about what has been going on in my life at the time. Living in the present, but also thinking ahead and always reflecting on stuff that’s happened throughout your life, as well. It’s almost like a journal, in a way. Each record is kind of a different chapter of my life — things I’ve been going through, different relationships, places I’ve traveled to, people I’ve met around the world. More than anything, [this record] is on a lighter note. Other than that, I try not to think about it too much.”

On his songwriting process for this record, which he wrote in isolation in rural California.

“I’ve always kind of had to find places of solitude to write. I have a bit of a short attention span, so I get distracted pretty easily. It’s good for me to get away from day-to-day distractions somewhere, where I can just reflect.”

“I’ve never been one to sit down with a pen and paper, write it down, edit and craft it out. I’ve always preferred things that came naturally and pretty quick. If I get hung up on a song, I’ll just shut it down and work on it at another time. I wasn’t too concerned with dialing in the songs out there, just coming up with the ideas. I worked on them more when I got home and then I would head back into the mountains and work on them some more.”

“I wanted the songs to be simple and have a bit of a classic feel to them, with not a whole lot of production. I wanted them to be simple chord progressions and simple stories.”

On songs he doesn’t often play.

“Sometimes songs can be pretty personal. Sometimes you’re kind of writing from a vulnerable state, so it’s not easy to play those songs every night. You have to be in the right frame of mind or know the state of mind that the audience is in, as well. It really depends on where you’re at. And when you show up and walk out on stage you get the vibe from the crowd — they kind of tell you pretty quick what mood they are in and what songs they want to listen to.”

On old songs he still likes to play live.

“We’ve been playing a lot of older stuff. These new guys I’ve been playing with in the band are amazing. We work on a lot of old songs from ‘Mescalito’ and ‘Roadhouse Sun.’ ‘Bluebird’ and a song called ‘Sunshine’ and a song called ‘Traveling Jones’ — there’s a handful of them that we’re reworking and taking stuff from the record and kind of adding to that. Everybody who plays kind of brings their own thing to it, so I like for the guys to have that sort of freedom, being versatile and brining their own thing to it. So it can change night to night.”

On what novel — if converted into a film — he would want to write the score for.

“There’s a book called ‘The Dogs of Winter’ that I read a couple of years ago about these nomadic surfers up in northern California and Oregon searching for these crazy waves.” •