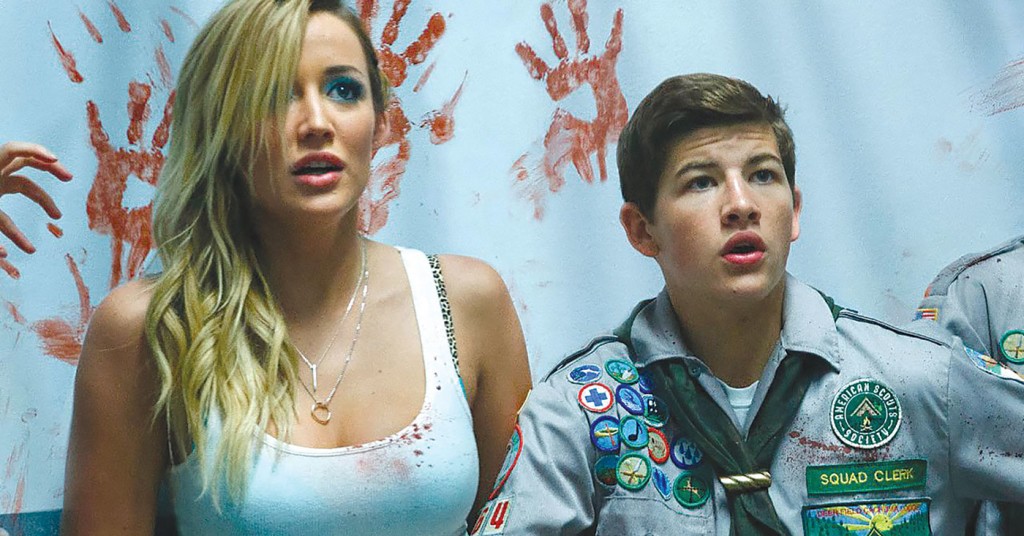 Scouts Guide to the Zombie Apocalypse

SCOUTS GUIDE TO THE ZOMBIE APOCALYPSE
2015; $19.99-26.99; R
This thing is an absolute hoot! Three dim-witted “teens” (Tye “Last Man Standing” Sheridan, Logan “I’m in the Band” Miller, and first-time actor Joey Morgan) having outgrown their childhood Scout troup, go on one last camp-out just as raging rotters come a-bustin’ out of their graves. Don’t you hate it when that happens? Luckily they “rescue” leggy, buxom cocktail waitress Sarah “Don Jon” Dumont — rocking a pair of cutoffs, a string-tee and a hog-leg shotgun! — who leads them in an all-out war to save humanity. Just as goofy as it sounds, with cameos by Cloris Leachman, and jaw-dropping hottie Halston Sage (“Neighbors”). Guy flick; go figger.

THE WALK
2015; $19.99-26.99; PG
While too few remember the event today, four decades ago there were these two big towers in New York City and one little man who dreamed of walking a high-wire between them — despite the fact that their owners, the city, and the police all refused to give him permission. That man was Philippe Petits, here brought to life by Joseph Gordon-Levitt for director Robert Zemeckis. Clevery staged as a 60’s caper film, and utilizing staggering/dizzying 3D special effects to recreate the towers and the titular stroll, this may be the most entertaining flick in all of 2015. An absolute must-own featuring Sir Ben “Gandhi” Kingsley and Charlotte “The Hundred-Foot Journey” Le Bon.

FLESH AND BONE
2015; $34.98-49.98; UR
A wildly original series from Starz focusing on the life of a self-destructive young ballet dancer (drop-dead gorgeous Sarah Hay from “Black Swan”) fighting both internal and external demons to find a life in this physically demanding and emotionally wrenching profession. Filmed in New York City, the show is as dark and glimy as the city itself, showing no mercy on the tiny ballerina who’s not afraid to fight for all she can get, but growing every more exhausted physically, emotionally and morally. Possibly the finest and most adult hour on U.S. TV; our highest recommendation.

JOE DIRT 2: BEAUTIFUL LOSER
2015; $19.99-26.99; UR
David Spade fans (you know who you are … or were) consider 2001’s “Joe Dirt” to be his Magnum Opus: the low-class adventures of an idiot white-trash mullet-head with neither education nor money, and only a head full of rock-and-roll to keep his ears from slapping together. In this straight-to-web-and-video sequel he somehow travels back in time (don’t ask), discovers he’s screwed, and must bring to bear all his redneck powers to return to his family and friends in the present. With damned-hot Brittany Daniel, Patrick Warburton, Mark “Sharknado 2 & 3” McGrath, Dennis Miller, Christopher Walken, and blonde-and-bulbous “Dancing With the Stars” smoker Charlotte McKinney.

OVER YOUR DEAD BODY
2014; 17.95; UR
For our money, no one makes horror films — particularly ghost stories — like the Japanese. This terrific shocker, aka “Kuime,” the work of prolific action/crime/horror master Takashi Miike, contains all his favorite themes: nostalgia, the infirmed, and a perverse take on friend/family bonds. Here, actors assemble, some of them old friends or lovers, to rehearse a play based on folklore concerning vengeance from beyond the grave. But the more they get into character, the more obvious it is that they have awakened an otherworldly horror bent on bringing the tale to its bloodthirsty climax! A masterful and truly shocking horror that really delivers.

SICARIO
2015; $17.99-24.99; R
Given the cast and subject matter, we were expecting another of those Euro-made cameo action-movies that clog up the vidstores — but we couldn’t have been more wrong. Emily Blunt (who kicked repeated ass in “Edge of Tomorrow”), Josh Brolin and Benicio Del Toro come together in a raucous and powerful tale of officially sanctioned revenge at the U.S.-Mexico border. Blunt plays the FBI agent whose team was blown to smithereens by a bomb-wielding drug cartel, now given the task of eradicating the evildoers by whatever means necessary. The action starts full-tilt and never lets up, with the plot becoming increasingly more complex with each step. Intelligent, believable (mostly) and truly exciting. This thing rawks!

TRUE DETECTIVE: SEASON TWO
2015; $39.98-79.98; UR
Vince Vaughn never impressed us much as a actor until we saw him in this powerful HBO series where he gets to say things like, “Never do anything out of hunger. Even eating.” And with a cast that includes Matthew McConaughey, Woody Harrelson, hot-damned Rachel McAdams, Taylor Kitsch and Michelle Monaghan, how can you go wrong? Season two bolts from the gate with an episode set in Vinci, CA, where Vaughn plays the gangster with degenerate cop Farrell in his pocket, all trying to determine who shot a man on a park bench in the middle of the night. Co-stars Ms. Prolific Nudity and X. Plosive-Action.

AGATHA CHRISTIE’S PARTNERS IN CRIME
2015; $24.98-39.98; UR
In an all-new reimagining of one of the BBC’s best-ever series’, David Walliams and Jessica Raine are Tommy and Tuppence Beresford, now presented as bored 50’s suburbanites who decide to chase mysteries and solve crimes despite having not one clue how to do so. Christie’s original stories were set in the Roaring 20’s, but these nicely capture the wit and style of her writings with lots of espionage and World War worries to keep things hopping. James Fleet from “Outlander” is wonderful as the mischievous and canny Uncle/Major who sends them off on “errands” which never seem to go as expected. Gangs of fun.

BROAD CITY: SEASON 2
2015; $23.98-26.98; UR
Abbi Jacobson and Ilana Glazer make this look easy: wandering about NYC, poking fun at all the tiny yet truly warped things that humans – especially big-city humans – waste their life’s energies on. Raunchy as hell, edgy enough to shave with, and funny to boot, it is always curious to us how many people just don’t “get” this show: there is something deeply psychological at play here, but its beyond our meager mental powers to explain it. All we know is: We laughed our asses off. Two discs of unique and original modern comedy.

DAI SHOGUN COMPLETE COLLECTION
2016; $34.99-59.99; UR
This is admittedly a rather silly anime with lots of teasing fan-service on the cover (aka, “skin”), but little titillation within – yet still a lot of fun, despite having one of the goofiest plots imaginable. In an alternate Japanese feudal history, 17-year old virgin teen boy Keiichiro – who breaks out in hives whenever a girl comes near – believes he has just conquered Nagasaki (it’s complicated) while working in his grandfather’s public bathhouse. His job, of course, er, “exposes” him to armies of young double-D-cup warrior-babes and other assorted teasing tribulations. Like we said: silly, but sweet.

MEMORIES OF THE SWORD
2015; $14.98-29.98; UR
Byung-hun Lee, who played the relentless T-1000 in “Terminator Genisys”, continues as the chief baddie in this Korean historical martial-drama. But the real star is Do-yeon Jeon, who portrays the 18-year old daughter of a warrior betrayed and murdered by Lee during the opening credits, now ready to avenge her mother’s death and rout the evil Chinese from their land. Have you ever noticed how often the Chinese appear as the bad guys in these things? Hmmm … A nicely bloody and very bold subtitled dramatic actioner.

SLEEPING WITH OTHER PEOPLE
2015; $19.99; R
Alison “Community” Brie and Jason “The Last Man on Earth” Sudeikis come together as a pair of damaged adults who can’t keep it in their pants. Both are serial cheaters, disgusted by their inability to commit but trying to reform, who shared a bed briefly a dozen years ago. Now “in a program” and desperate for guidance, they make this commitment to each other: They will hear the other’s confessions, share their stories of hot, steamy monkey-love, completely bare their souls … and remain platonic friends. You know this isn’t going to go well, don’t you? Gangs of very adult fun with likeable leads and strong second-bananas.

THE HOUSE WHERE EVIL DWELLS / GHOST WARRIOR
$25.95; R
A new Blu-Ray 80’s double feature, the lesser of which, “Ghost Warrior”, was a Charles Band production – always a sign of quality brain-dead entertainment. But the real news is “House”, the infamous 1982 spooker which introduced Japanese ghost stories to unprepared US audiences. Edward Albert, fresh from “Galaxy Of Terror”, is the husband of delicious Susan “Straw Dogs” George, with TV-Western star Doug McClure as their friend/houseguest in Japan, all unaware that their abode was the site of a horrible infidelity-driven murder-suicide long ago. With an infamous nude sex-scene between George and McClure, mechanical crabs (insert crab joke here), and gratuitous blue ghosts in kimonos, this is a monstrous guilty pleasure. Our kinda flick.

THE PERFECT GUY
2015; $19.95; PG-13
We’ve grown gun-shy of Afrocentric dramas – not because they aren’t great, but because they all seem to have the same five actors and endlessly recycled plots. Why is that? This thriller shows how to do it right, with Sanaa Lathan as a successful professional who breaks up with Morris Chestnut, then falls hard for secretly shady Michael Ealy. When Chestnut resurfaces with evidence that Ealy is not who he seems to be, a well-written game of cat-and-mouse ensues.