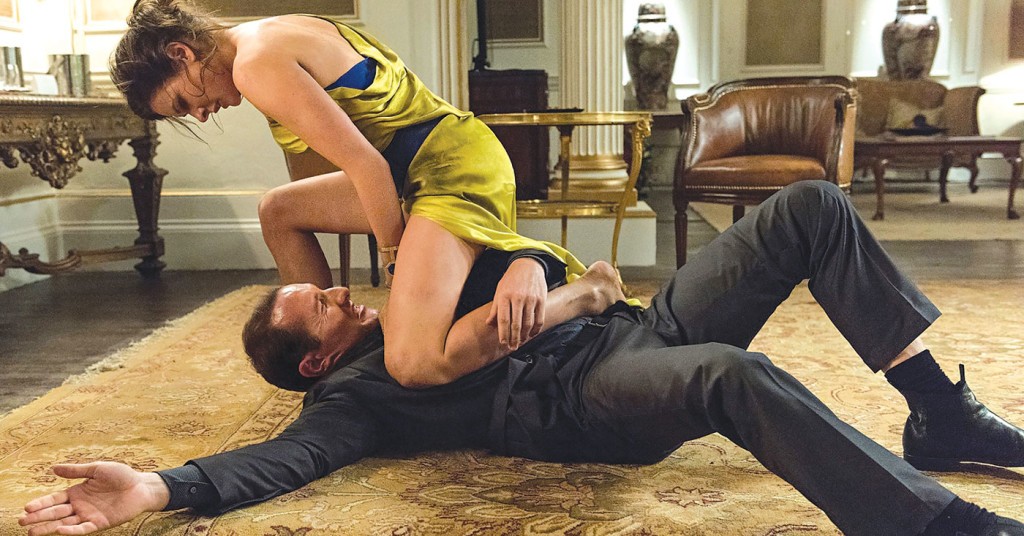 MISSION: IMPOSSIBLE: ROGUE NATION
2015; $19.98; PG-13
Tom Cruise and his IM Force — including Jeremy Renner, Simon Pegg and Ving Rhames — team up with super-hot double/triple/fourple agent Rebecca “The White Queen” Ferguson in this stunning bunch of action nonsense when they, in essence, get fired by Alec Baldwin. It seems a new global threat, “The Syndicate,” has been uncovered and only Cruise’s insane stunts can save the world. The opening gag, with Cruise bringing down a plane while clinging to the outside, is worth the price of admission alone. We love this stuff!

TED 2
2015; $22.98; UR
Mark Wahlberg. who must be the most tolerant guy on the planet, comes back once again to be the foil of his vulgar, foul-mouthed, living teddy bear, voiced by writer/director Seth MacFarlane. This time Ted and his squeeze, played by gorgeous Jessica Barth, want to have a furry baby, which means that Ted will have to go to court and prove he’s a real person — echoing the recent gay-marriage battles. We’re not big fans of MacFarlane, but with a cast that includes Amanda Seyfried, Giovanni Ribisi, Morgan Freeman, Sam J. “Flash Gordon” Jones, and Patrick Warburton, how can you go wrong?

FANTASTIC FOUR
2015; $22.98; PG-13
The world waited breathlessly for a really good FF movie series … and they’re still waiting. Okay, the idea of making the characters significantly younger has appeal, but the plot simply isn’t very interesting. And don’t get us wrong: We actually liked the stony CGI Thing better than the previous foam-suit version, but Jamie Bell’s voice sounds silly coming from it. And while Miles Teller’s makes a passable — if not particularly bright — Reed Richards; Kate Mara simply didn’t work as the historically tall, willowy Sue Storm. Only Michael B. Jordan’s Johnny Storm seemed to be having fun. Worth a look for your next bad movie party.

HAYATE THE COMBAT BUTLER: HEAVEN IS A PLACE ON EARTH
2011; $29.98-39.98; UR
Regular readers of this column (support groups standing by) know that we are totally hooked on this “harem” anime series about a young servant/protector lad vainly trying to keep his giggly, precocious, big-eyed charges from often-otherworldly harm. Here, all the gang gathers at wealthy Nishi’s country vacation home to enjoy the last of their summer break, but the ghost of Hayate’s grandmother is working her will to break up the tight-knit group for her own mysterious purposes. Most of the action takes place in an abandoned amusement park. Colorful, absorbing and addictive as hell.

MARCO POLO: SEASON ONE
2015; $24.98-49.98; UR
Once you get past the admittedly slow first episode, this historical adventure series takes off like a shot! Italian TV star Lorenzo Richelmy is clearly lost as the legendary explorer, way out of his depth in the halls of the great Kublai Kahn (Brit-born Benedict Wong of “The Martian”). But the real stars are Olivia Cheng, Joan Chen and Zhu Zhu as the ass-kicking sexual steam vents powering the infamous court intrigue of 12th century China. A breathtaking, big-budget production that educates as much as it entertains. Watch it anyway.

THE CAR
1977; $21.98-29.98; PG
The best damned movie James Brolin ever made, now available on Blu-Ray with all the trimmings. He’s the Sheriff of a small New Mexico town being terrorized by an indestructible black sedan — with nobody behind the wheel! The most exciting and entertaining PG “Jaws”/”Christine”-inspired cheapie we ever saw, and the very definition of the word “classic.” Co-stars Ronny Cox, R.G. Armstrong, and vastly underrated actress Kathleen “7th Heaven” Lloyd. Enjoy.

THE MAZE RUNNER: THE SCORCH TRIALS
2015; $24.98-39.98; PG-13
Let the brain-deadness continue! Installment Two in this dim-witted, overlong, formulaic YA-novel-meets-video-game cinematic crapfest series, scientifically designed to bore the living snot out of anyone over the age of 13. Life is too short.

THE SURFACE
2014; $24.98; UR
Chris “Grimm” Mulkey, on his way to deliver ill-gotten cash to criminals, crashes his plane into the mires of Lake Michigan, where he’s saved by suicidal Sean “Samwise Gamgee” Astin. But they are a long way from shore, Astin’s boat is barely afloat, the lake seems determined to take them. Plus — to put it mildly — these two men have issues, which they argue about while occasionally trying not to die. A true indie film: daring, different, focused on people and what we can learn from them instead of special effects. With Mimi Rogers.

ZOMBIE HIGH
1987; $21.98-29.98; R
An oily concoction from the slasher decade, embracing its cheezy inner crapulence without shame. Virginia “Hell On Wheels” Madsen stars as the first female student at an all-male boarding school. So far, so good. Then she notices that her classmates are awfully devoted to their studies — and uninterested in her and spunky Sherilyn Fenn! Now, that’s just not normal. No actual zombies but some horrific 80’s music by “Tease,” all delivered with a dose of humor. An 80’s classic now on Blu-Ray.

*** More Recommended Videos for our On-Line Readers, Only!
CHAIKA THE COFFIN PRINCESS: SEASON 1
2014; $49.98-69.98; UR
Another unique, original, and addictive anime series featuring a young girl at the center of a fractured universe. She is the daughter of a former despotic ruler who was killed five years earlier, his remains taken by the eight “heroes” who shattered his reign of terror. Her mission: to recover her father’s remains and correct history – if necessary – about his supposed deeds, now with the help of two former mercenaries. Combining popular “harem” tropes and young male-female relationships with mystical battles, lots of action, and powerful romantic elements, this series rocks!

DIVIDE IN CONCORD
2014; $17.98-24.98; UR
Wow! What an unexpected rush! This doc introduces us to 84-year old hellbrand Jean Hill, a lady who is mad as hell and isn’t going to take it anymore. Her target? The 3rd largest industry in the world and the root cause of the Great Pacific Garbage “Patch” (in truth larger than several American states). Her goal? To ban the sale of bottled water, the refuse of which makes up much of the Patch, and a large percentage of the world’s landfills – plus fuels fracking, air pollution, and the privatization of the world’s water! The face of the opposition is red-hot mama Adriana Cohen: a doe-eyed celebrity model, mother, and full-time publicity seeker. It’s clobberin’ time!

THE DUNGEONMASTER/ELIMINATORS
$22.98-26.98; UR
A pair of truly stinky ‘80s flicks, each with that little something special, now together on Blu-Ray. “The Dungeonmaster” (1984, aka “Ragewar”) is a period “Computer Geek v. Evil Demon” spooker starring soap-vet Jeffrey Byron as the keypuncher, enlivened by big Richard Moll (Bull from “Night Court”) as the netherworldly Mestema. The second is a bit more complicated, involving time-travel, cyborgs, and heroic Neanderthals. With a cast headlined by Denise Crosby (STTNG’s Tasha Yar), former Western star Andrew Prine (recently of “CSI”), and former dancer/bodybuilder Patrick Reynolds as the half-human machine, both are courtesy of legendary no-budget schlockmeister, Charles Band. Enjoy.

TOKYO FIANCÉ
2014; $24.98; UR
Lovely, winsome and admittedly a bit dark, this Belgian/French romance follows Pauline Etienne (“Eden”) as a Belgian with an insatiable desire for all things Japanese, who finds love – and so much more – in the arms of a Francophile Japanese student. Oh, yeah: The Fukushima nuclear disaster plays a large role, too. Breathtaking camera work plus underused blonde French-TV knockout Julie LeBreton make this a must-see for fans of World Cinema.

TOP SPIN
2014; $17.98-24.98; UR
An admittedly odd, fun, and very accessible doc on table tennis (“ping pong” to you Hoosiers) that follows three teens as they enter the 2012 US Olympic Table Tennis Team trials. Fun, overblown, and completely obsessive, or as one competitor puts it, “Table tennis is a lot like martial arts and boxing … combined with chess!” And watch the end credits for a roster of ping-ponging associate- and consulting- producers, all of whom donated $1,000 or more on KickStarter to get this off the ground. Neat.