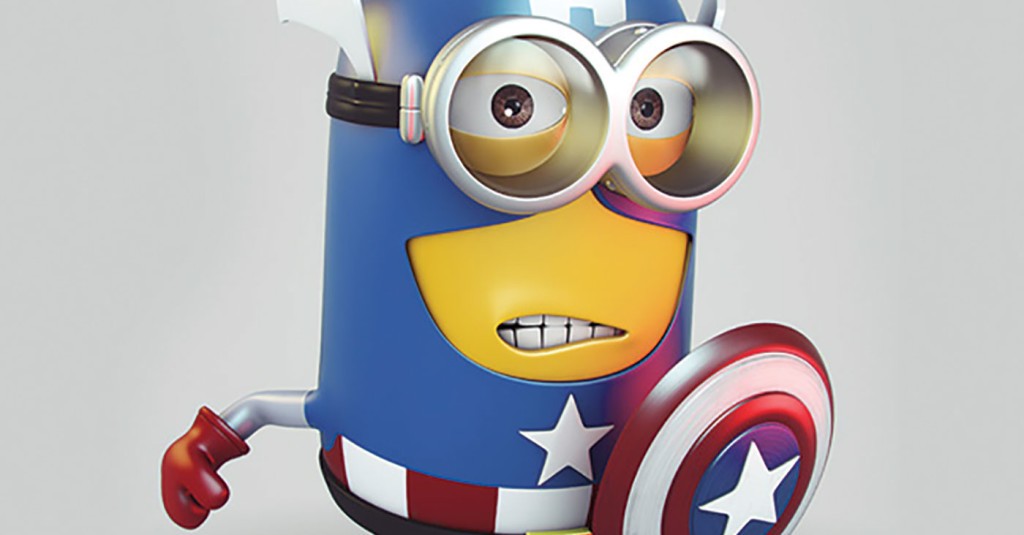 MARVEL’S ANT-MAN
2015; $29.98; PG-13
Before seeing this, we opined that having an aging Hank Pym (Michael Douglas) pass the torch to Scott Lang (Paul Rudd), instead of just sticking with Pym’s Ant-Man origin somehow violated the comic-movie code, but the end result is too much fun to dismiss. Rudd’s Lang is a super-smart thief, trying to go straight in order to reunite with his daughter after wife Judy Greer kicks him out. But he needs one last score to break away, attracting the attention of Pym, who is looking for a superhero apprentice. But all that is window dressing for comedy (much of it courtesy of Michael Peña), action, beautiful women, great FX and sight-gags galore. A real treat and a must-own.

MINIONS
2015; $27.98; PG
Right up front: Those little yellow slapstick/pantomime Minions, breakout co-stars from “Despicable Me,” work best as second-fiddle lackeys. Their brainless nature isn’t really star fodder, but the writers have wrapped so many layers of goofy over-the-top action into this flick that it works, nonetheless. We loved watching them evolve from yellow one-celled creatures to the pill-shaped calamities they are today, always searching for the most evil of villains to serve … and always the cause their master’s downfall. With the voice of Sandra Bullock as Scarlett Overkill, plus Jon Hamm, Michael Keaton, Allison Janney, Steve Coogan and a host of others. Enjoy.

OTHER DVDs of Interest

AURA
2013; $24.98-39.98; UR
Aka, “Aura: Koga Maryuin’s Last War,” this little-known anime based on Romeo Tanaka’s romantic teen novel follows the trials of Ichirou, a young man whose mind seems lost in a personal fantasy world of good and evil. To escape bullying over his daydreams he moves to a new school where he meets a girl as lost as he is, also being bullied. Together they abandon our reality entirely and set forth in their own. A beautifully rendered allegorical tale with a small but obsessed fan base. Immersive and intelligent.

THE GARBAGE PAIL KIDS MOVIE
1987; $21.98; PG
Once upon a time, Topps, the baseball card people, went looking for a new bubblegum delivery gimmick. Inspired by the asinine Cabbage Patch craze of the day, they created The Garbage Pail Kids: characters so snot-filled and disgusting that many schools banned the cards from their hallways — sending kids into a feeding frenzy as each new pack was released! Topps quickly licensed an animated TV series and this live-action movie which ranks as one of the biggest flops in cinema history — not because it was bad (it was), but because parents refused to let their lil’ darlings see it! A slimy, gross, smelly salute to the 6-year old in all of us, now on Blu-Ray.

THE GIRL KING
2015; $24.98; UR
We don’t know which is more unbelievable: the true story of Queen Kristina of Sweden, raised as a boy and eventually finding love in the arms of a Countess, or director Mika Kaurismäki’s telling of it. Tiny, frail Malin Buska stars as Kristina, dressed male from birth, then crowned Queen at the age of 6; trapped in a 17th Century world of sumptuous, deadly beauty where her own identity was ignored or rejected. Filmed in English, we follow her forced marriage by pious assholes demanding she produce a male heir, and witness how she reclaimed her life via an intellect that none of the court imagined a “mere woman” could possess. All biodramas should be this good.

UNDER THE DOME: SEASON THREE
2015; $52.98; UR
Stephen King deserves his reputation for squeezing incredible drama out of ordinary people trapped in extraordinary situations (see all five season of “Haven”), but this is his greatest — and most allegorical — challenge: An ever-expanding drama with a limited cast of characters, all trapped within a mysterious force field. Granted, it’s a big force field, enclosing an entire town, but the many mysteries of what it is, where it came from, and why, becomes secondary to the private mysteries of the people themselves, Constantly boiling with very human interactions and truly bizarre discoveries; this season starts with new residents emerging from cocoons. One of our favorite series’.

YOU CANT TAKE IT WITH YOU
1938; $14.98-19.98; UR
Arguably the greatest of Frank “It’s A Wonderful Life” Capra’s many classic films, now available in a grand and gorgeous 4K B&W Blu-Ray — subtitled or translated in 22 languages! Two families, one lead by greedy capitalist Edward Arnold and the other by eccentric anarchist Lionel Barrymore, clash in the ultimate battle of money-versus-happiness when Jimmy Stewart and Jean Arthur fall in love. Brilliantly written and staged as only Capra could do it, some of the best lines come from legendary actors Dub Taylor and Eddie “Rochester” Anderson. The epitome of the screwball comedy; a must-own — and a steal at this price!

ANGRY BIRDS/STELLA/PIGGY TALES
2015; $14.95 ea.; UR
Our vidgame tastes run old-school, which is why we love Angry Birds: while it’s part and parcel of the damned vidphone era, there’s something insanely retro about their never ending war against the pigs – and the makers have continued this success in ever-expanding video spinoffs. New to video: “Angry Birds Toons: Season Two/Volume One” ($14.99), “Angry Birds Stella: Season One” ($9.99), and “Piggy Tales: Complete Season One” ($14.99).

DOC MARTIN: SERIES 7
2015; $26.98-39.98; UR
“Doc Martin,” one of our favorite guilty pleasures, concerns a rather odd physician (duh), played by long-time UK TV funnyman Martin Clunes (who began his career in an ‘83 episode of “Doctor Who”), ministering to the good people of Port Wenn, Cornwall. The problem is, the good doctor is an ass: A grumpy, mean spirited, callous, intolerant misanthrope who has no one to blame except himself when things go tits-up, which they always do. It helps, of course, that his patients are all friggin’ loons. The highlight of this season finds the good doc forced to quietly save a life while doing a live radio interview. That rarest of TV comedies: It’s funny as hell!

HANNIBAL: SEASON 3
2015; $16.98-24.98; UR
Mad Mads Mikkelsen takes on the cannibal-in-training role in this NBC TV series about the early life of Dr. Hannibal Lecter, sticking closer to the characters in Thomas Harris’ “Red Dragon” than the many movie versions. Of central import, of course, is the good doctor’s star patient, Will Graham (Hugh “The Big C” Dancy), who ended Season Two’s bloodbath-finale in a coma. This season begins with the good doctor hiding in plain sight in Italy, accompanied by his shrink, Dr. Bedelia Du Maurier – Gillian “X-Files” Anderson! – with Laurence Fishburne hot on his trail. Extraordinarily good TV … which is why brain-dead NBC execs just canceled it!

MOMENTUM
2015; $16.95; UR
The latest in a seemingly endless parade of Euro-made cameo-action thrillers, this one featuring Olga “Quantum of Solace” Kurylenko, James “The Following” Purefoy, and Morgan Freeman (though never in the same scene). It’s clearly Ms. K’s movie, one in which the former model gets to pose – sometimes in her underwear – with big, dark eyes peering back over her shoulder, straight at the camera. Oh, and she’s sometimes holding a gun. We’re being facetious, of course; this is one of the better flicks in this genre, but she deserves better. Watch for blonde South African beauty Jenna “Black Sails” Saras, who gets nekkid.

PARTISAN
2015; $14.98; UR
Wow! This thing blew us away! A wonderfully original and disturbing Australian film with Vince “Black Swan” Cassel as the intense master of a backwoods commune. You won’t be able to take your eyes off Cassel as he masters his flock to follow increasingly frightening visions, selecting a young boy (first-time actor Jeremy Chabriel) to be his lieutenant – and assassin! The child eventually becomes aware that his soul is in danger and must … We won’t spoil it.

TATTOO
2013; $24.98; UR
To call the Gay scene of 1970’s Brazil “flamboyant” would be a ridiculous understatement: you can’t imagine a more colorful and exuberant culture anywhere on the planet, then or since. Into this heady mix comes Clécio, an outspoken sexual adventurer who owns the local anarchist watering hole, a favorite target of the notoriously repressive military government. His charisma, savvy, and intelligence has kept the place open, attracting a growing body of supporters, but it all unravels when he falls for an 18-year-old policeman. (Insert Village People joke here.) If you like your vids daring and provocative, this is the one you’ve been waiting for.

VELOCIRAPTOR
2014; $24.98; UR
Has nothing whatsoever to do with Jurrasic Park. Instead we find a Mexican mix of sexual confusion, an approaching Apocalypse, and the goofy nature of romance as two young men, longtime friends – one Gay, the other curious – wander about discussing Life, The Universe, and Everything Sexual. They do a little experimenting then go back to playing basketball.