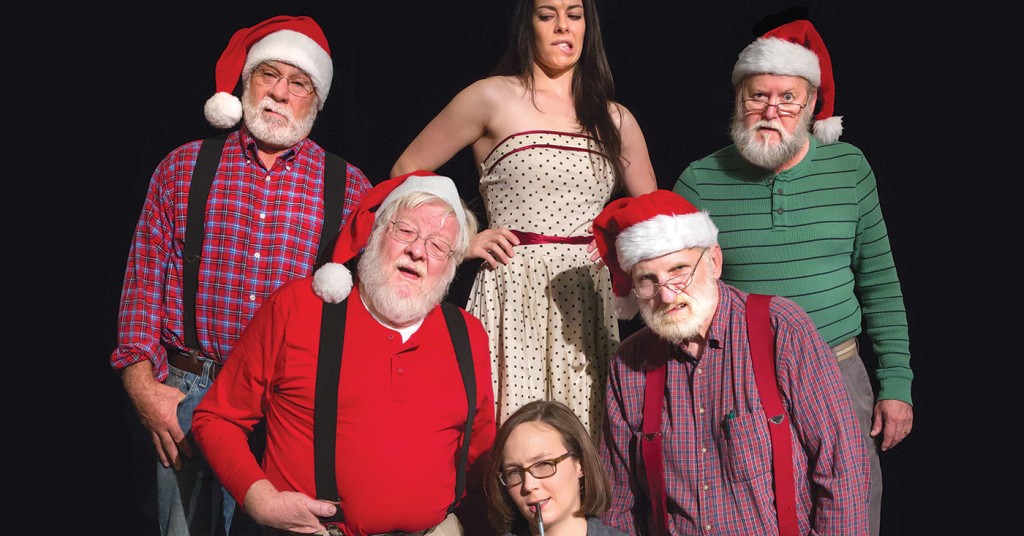 A bit of madness, a bit of magic and plenty of merry humor, that’s what Bunbury Theatre is dishing up for the holidays in Juergen K. Tossman’s bright new Christmas play, “The New Mrs. Claus,” which opened last weekend.

This is a refreshingly different sort of play for Tossman (who also directs, acts and has served as Bunbury’s artistic director for nearly 25 years). Many of Tossman’s dozen or so premieres at Bunbury have reveled in tangled plots, large casts and intricate overlays of moral philosophy and humor.

As the play opens, these four are joined by a brand new therapist, Mary Sunshine (she hates the adjective “little”), played by Clara Burton.

It’s a fun scenario that highlights the quirks and idiosyncrasies of the four Santas — and gives the actors plenty of space and comic material.

Burmester plays Kris Kringle with an uninhibited energy and physicality that plays up his irreverent humor and insatiable appetite for all things intoxicating; Kringle isn’t quite sure whether he’s at Santaholics Anonymous or at a therapy session — but he’s likely to launch into robust Christmas songs (or dubious double entendres) at the slightest prompt. Castleberry’s St. Nick is an anxious mess, traumatized by a recent department store encounter with a beady-eyed, gum-chewing young pisser too large to properly sit on Santa’s lap. He’s also on a quixotic quest to impose some kind of order on this madcap therapy sessions.

Tossman’s Babbo is a savvy, sophisticate, with a biting wit and a calculating approach to questions of justice — like how many lumps of coal are the appropriate penalty for any given transgression. And Morton’s Santa Claus is a jolly, avuncular figure who never stops jotting notes in his little black book. Is he making a list and checking it twice? Maybe. Or maybe he has a different agenda, but you’ll have to see the play to find out what that might be.

As the session unfolds, these four share droll accounts of their Christmas experiences. And then it turns out that in a strange coincidence, all of them recently lost their wives. And each has recently found a new — and much younger — Mrs. Claus. All four of the new Mrs. Clauses are played by Neleigh Olson — and in a series of flashbacks, Olson plays the four women in a nicely honed series of vignettes that see her, by turns, as a gun-toting connoisseur of fire arms who supports a child’s right to toys of mass destruction (and is quite ready to fight a war against the war on Christmas); an upwardly mobile, avaricious clothes horse; and a kind of personal trainer who doesn’t think her husband’s little round belly should shake when he laughs like a bowl full of jelly — and who battles her husband’s lust for pork rinds and midnight snacks of all sorts.

Of course, even though this is by far Tossman’s most light-hearted play to date, other issues bubble up. Some are light, but thoughtful — including recurrent riffs on the true nature of Santa Claus. And others are darker, including the mysterious background of the fourth Mrs. Claus and her relationship with Santa. But in the end, thanks to a simple but deft bit of staging (and nice work from lighting designer Adam Portelli), the darkness gives way to magic.