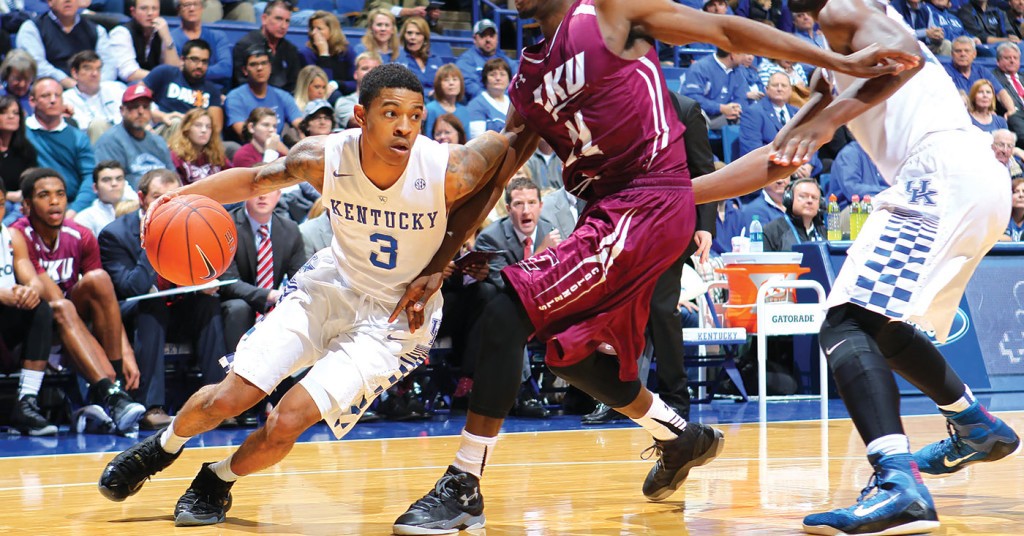 Christmas asks us to believe in magic. Children are told to behave in order to bribe a benevolent, magical home invader. Presidential candidates ask us to believe that national security can be solved by finding the proper balance between folksiness and racism. Governor Bevin not only believes in the magic of the Christmas story, but he apparently thinks the inn-keeper was the hero. Families everywhere believe that decades-long resentments can be set aside thanks to the magic of a young child’s smile and/or the magic of alcoholism.

What does any of this have to do with basketball? Being a Kentucky fan means it is Christmas all year round. This isn’t just because of the endless pile of candy or switches that God rewards you for your loyalty, but also because it requires an unending faith in magic. It’s not enough to win the game. We have to feel like we deserve to win the game, not because we scored more points, but because we were the righteous team, the chosen team.

Sure, Kentucky fans laud John Calipari’s “player’s first” philosophy as altruistic and noble, but if that philosophy wore a different jersey, it would feel usurious and dirty. We know this because it happened already. When we found out that the star of Calipari’s UMass teams had signed with an agent, vacating their wins, did we take pains to point out the evidence that exonerated the coach as we do now? Back then, we said, “That guy’s a cheater. Pitino wins the right way, with dignity.”

Which brings us to the rivalry. Every story has to have a villain, and every hero has to have her opposite. Just like God has the Devil, Jesus has Martin Shkreli, and Rick Pitino has the female orgasm, the Kentucky Wildcats have the Louisville Cardinals. Somewhere buried in our logical minds, we know that the other team is a group of uber-athletic humans who have varying senses of morality and senses of humor, but we don’t believe it. Instead, we see the other team as evil.

To Louisville fans, Kentucky looks like an over-achieving program: unlikable, unsmiling interlopers of the sport. And it’s true that Kentucky fans live and die with our team, maybe to an unhealthy degree. Not enough to try to get recruits to commit by using prostitutes who were allegedly too young to consent, but still, we love the team an awful lot.

It feels appropriate that this year’s game is being played in the shadow of the one cultural event that can outshine Christmas: the release of the new “Star Wars.” Those movies are selling us the biggest dose of magic imaginable. In a far away galaxy, in a long ago time, the most important people in the universe looked like us and had problems we could understand. They had father issues and sword fights, and the story was basically just a Western in space. More importantly, there could be no confusion about who were the good guys and who were the bad guys. No moviegoer in this galaxy or the other was remotely surprised when the blue-eyed farm boy blew up an entire army lead by a half-robot. By selling magic, they are selling comfort — the idea that no matter how far in the past or the future, no matter what remote corners of the multiverse we travel, the sentient beings will always be telling our stories. If that’s true, then we have already won. It’s not logical, of course, but it’s exactly the same feeling I get every time Tyler Ulis takes a bigger, stronger defender off the dribble.

In this season of magical thinking, maybe it would suit both fan bases to take on more earthly emotions as well. I’m speaking specifically about the emotion of forgiveness.

I write these words in the hours after Kentucky marched into Brooklyn as a double-digit favorite and made a middling Ohio State team look like The Harlem Globetrotters. It was a game unlike any other in the Calipari era, not because Kentucky lost but because at no point did the Wildcats look competent. For the bulk of the game, they looked incompetent, lost on defense and sluggish on offense. They kept staring at each other, shrugging and either chucking the ball against the side of the rim or making like a fullback, driving until they heard the whistle.

Halfway through the second half, Kentucky trailed by 16, and it may as well have been 50 given the mood of Big Blue Nation. Then, in almost no time at all, they looked super-competent. Jamal Murray made 25-foot shots like they were layups, and they pruned the lead to three. Just when it looked like they would get over the hump, they dribbled the ball off their knee and resumed playing like the church-league Wildcats who showed up for most of the game. Had they played just five minutes of mediocre basketball, then that eight-minute hot streak would have been enough to win.

After a loss, it’s easy — and useless — to be angry. But if we can believe what we don’t believe, then why not try to feel what we do not feel? At Christmas, let’s identify our anger, recognize it as ridiculous, and dismiss it in the spirit of forgiveness.

Skal Labissiere was supposed to be the next Anthony Davis, but so far, I’d rather have Davis as a fetus than Labissiere as a grown man. But Labissiere has known actual danger and has been put in actual pressure beyond any that the casual fan can imagine. When the Haitian earthquake struck, his house collapsed around him. He was trapped under the rubble, convinced his mother and sister were dead. From this, he survived and became stronger. Does he really need our forgiveness for missing a rebound? When we forgive him for disappointing us, we are forgiving ourselves for loving a random process so much. We are acknowledging that life isn’t always magic, and it’s far more fascinating — and, yes, often less satisfying — than the story to come from any screenwriter’s imagination.

Besides, this is the week we welcome home Richie Farmer, the Appalachian Super Mario, from his two-year stint in prison. There’s no better reminder that our heroes are all too human and that magic often fails. We can forgive Farmer for his crimes and still believe in the magic he brought on the court.

Forgiveness and belief are illogical, inseparable and entirely necessary for a mind to function. Otherwise, our stories have no beginning, no middle, no end and our basketball teams become a group of kids striving and struggling to play an arbitrary game together, no one better or worse than another. And if you believe that, you might as well believe in Santa Claus. •