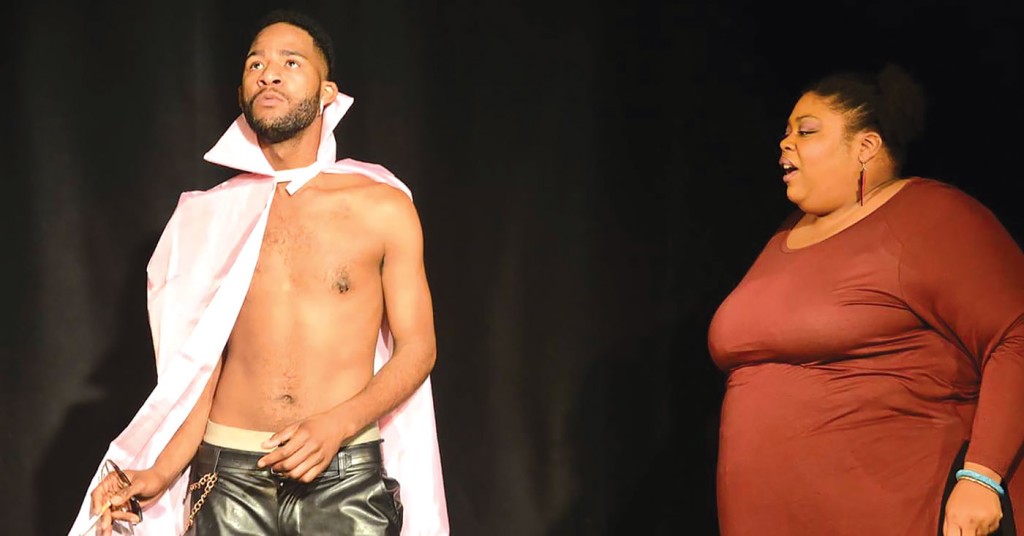 The University of Louisville’s African-American Theatre program is more than 20 years old. For more than a decade, from 1997-2010, the Juneteenth Legacy Theatre Company (founded by former UofL professor Lorna Littleway and Kristi Papailler, now on the theater faculty at Georgia College) was a powerful and artistically successful company dedicated to African-American theater.

In the years since Juneteenth closed down, there hasn’t been — as far as I know — an independent African-American theater production company, though the gap is partially filled by the work of playwrights/producers like Larry Muhammad and by Actors Theatre of Louisville’s strong commitment to mounting works by renowned and emerging African-American writers.

The Smoked Apple Theater Group, headed up by Nipsey Greene, is set on filling that void. Over the last year, the company has bootstrapped its operations via a series of short play festivals — a half-dozen 10-minute plays, aptly called “6’10: A Showcase of African-American Theater.”  Last week, the company closed its first season at Vault 1031 with the third installment in the series.

This installment of the showcase was attended by social media controversy. Greene and company were roundly criticized because African-American playwrights were almost entirely absent from the lineup of this “Showcase of African-American Theater.”

Greene responded with a spirited defense to the effect that the company had used a blind review process and had selected works that could be produced in a manner relevant to the company’s mission.

It’s not an issue that can be settled on social media, and as with the long-simmering debate over colorblind casting (google August Wilson and colorblind casting, if you’re unfamiliar with that controversy), it’s not likely to be resolved soon.

On balance, I side with the critics. The company’s stated mission is to “give the black theatre community a platform to cultivate their work and meet other artists to help grown the local theatre scene.” And later in the mission statement there’s this: “We want to work with new undeveloped works and help bring them into fruition.”

The script is the heart of theater. And short play festivals with small casts and low production costs offer crucial points of entry where emerging playwrights have an opportunity to explore their voices and visions and begin to find an audience. Given the company’s mission, and our culture’s urgent need to cultivate more voices, the play selection here represents an opportunity lost — despite the fact that the scripts were all quite fine.

Still, theater also needs more African-American actors, directors, stage managers and technical professionals as well, and in that regard, the “6’10” showcase was a resounding success, featuring six directors and 10 performers.

This was theater at its most minimal — the stage almost entirely bare.  But at the Sunday matinee, the direction and performances were assured and confident, sometimes poignant, more often richly comic.

The opening selection, “Nigga Moments: Domestic Disturbance,” was written and directed by Greene, who also played a role opposite Katrice Gill. This script — the only offering that was explicitly and necessarily rooted in an African-American perspective —  is a sharply observed comedy of manners that looks at class and cultural divides in the African-American community, at once revealing and satirizing a kind of voyeuristic fascination and contempt that divides one part of the African-American community from another. It’s a short script with plenty of revelations (and in itself a strong argument for discovering and featuring more African-American writers), and Greene and Gill delivered it with impeccable timing and a fine sense of irony.

Len Cuthbert’s “You, Me, Me, You,” directed by Iarionne Reine — with Jay Padilla and Ricky Acklin as a couple of former lab partners who run into one another at a high school reunion and gradually learn that they’ve undergone some quite exceptional and complementary changes — is a droll piece of timely sketch humor, delivered with confident charm.

“Rock Idol,” by Krista Knight, directed by Westerfield Tolbert, with Ricky Acklin as a flashy, over-the-top, preening rock star (of dubious achievements) and Morgan Younge as a smitten fan is another fine, quick sketch that benefits from Acklin’s superb parody of a secretly vulnerable glam-rock god.

Acklin returned (for his third role of the afternoon) in “A Dog Dreams,” by Jeffrey Fischer-Smith, directed by Gary Brice. This time, Acklin was partnered with Marcus Orton, in an emotionally effective story about a ghost who comes back to visit his grieving partner — and their grieving dog. It’s a sweetly-wrought script, and finely delivered (and the festival certainly highlighted Acklin’s acting range!).

“The Mama and the Papa,” by Rex McGregor, directed by Leslie Pryor, with Kronski Jones and Marquita Howerton was a silly little satire (with more tangled threads than it strictly needed) about the intersection between sex and religion (and contraception) set square in the middle of the Summer of Love.

And “Pumps,” by Brett Hursey, directed by Janelle Renee Dunn, offered an outstanding performance by Gwendolyn Evans as a woman obsessed with the symbolic power of footwear and Everett Ezell as the (apparently) more rational partner, who tries to talk her down.

Smoked Apple is planning to ramp up its offerings next year with a couple of full-blown productions (including one by August Wilson). And based on the quality of the performances this past weekend, it should be an interesting season indeed.