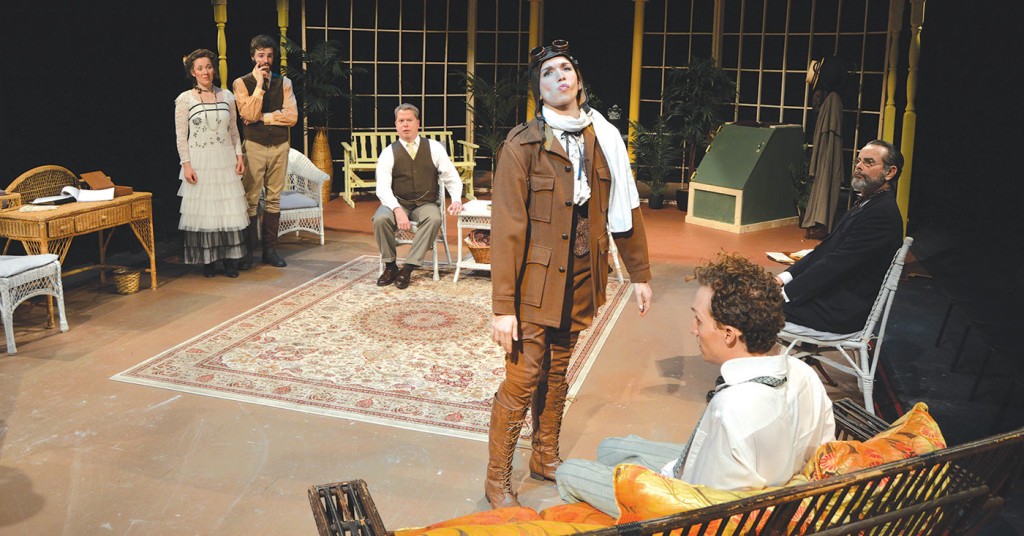 By 1909, when George Bernard Shaw’s play “Misalliance” premiered in London, the playwright was emerging as a powerful but controversial voice in the English theater. In the Times of London, he was described — and not positively — as part of a new generation that reveled in flouting the fundamental “fusty musty” Aristotelian laws of the theater.

Instead, the critic said, Shaw and his ilk “will not be at the pains to convert their ideas into that organic whole which we call a play. They simply distribute their ideas pell-mell among a number of interlocutors” whose job it is to utter the philosophical musings of the playwright. Plays, said the critic, “are now to be superseded by debates.”

Those remarks (and others along the same line) prompted Shaw a few months later to defend himself in a letter to the paper in which he noted that “Misalliance” is rooted in Greek dramatic forms and scrupulously observes the Aristotelian unities of time and place.

In fact, this idea-driven romantic farce — which Shaw subtitled “A Debate in One Sitting” — does at times seem to channel Aristophanes, with its unending flow of ideas, allusions to great thinkers of the time, the politics and etiquette of class and gender. But it’s also a brilliantly modern comedy that’s rooted in its time and speaks easily to ours — especially in this sparkling, perfectly crafted production directed by Hal Park with a cast drawn mostly from the Walden Theatre/Blue Apple Players Professional Company-in-Residence, joined by a few members of the Walden Theatre Conservatory program.

Plotwise, the heart of the matter is a romantic “misalliance” that ticks like clockwork toward an inevitable explosion — but perhaps it’s best to take Shaw at his word, and focus for a moment on the ideas and interlocutors.

The setting is the prosperous home of John Tarleton, Sr. — a self-made man who earned his fortune in the underwear business. Tarleton, Sr. is played with a bluff, confident sheen by Charlie Sexton. He’s a man of books and ideas. In fact, he says, it’s not underwear that made his fortune — but ideas: “It’s not the underwear! The underwear be hanged. Anybody can sell underwear! Tarleton’s ideas. That’s what’s done it!” And when it comes to ideas, this Tarleton has plenty — his talk is littered with references to Darwin, Ibsen and Thomas Jefferson — but for some reason when he raises the idea of the “superman” he can’t quite dredge up Nietzche’s name: “Read Whathisname,” he says.

Because of his love of reading, the underwear magnate is endowing a number of free libraries. That doesn’t sit well with John Tarleton, Jr., played with superbly varnished vigor by Parker Henderson, who happens to be a YPAS student (though you’d never know it without the program). By his own account, this Tarleton has “more body than brains.” He’s pretty sure that all those free libraries are just money down the drain. “It’s ruinous,” he says, arguing that public work “is a sort of laziness, getting away from your own serious business to amuse yourself with others.”

The women in the Tarleton family aren’t short on ideas either. Mrs. Tarleton, played by Jennifer Pennington (who gets around quite effortlessly in a vintage wheelchair because of an accident that delayed this production’s planned opening) is attended in this production by a quiet Nursemaid, played by Lilly Rich (like Henderson, a member of the Conservatory program). Mrs. Tarleton, whose husband refers to her as “chickabiddy,” started life as a shop girl. These days, she looks down on the aristocracy (when they’re civil, she tells her daughter, it means they want to borrow money), but wants her daughter Hypatia (Heather Burns) to learn their ways — if only because Hypatia is engaged to an aristocrat. In matters of class and morals, Mrs. Tarleton is a subtle and philosophical observer. And as she and Hypatia pick up their darning in a quietly riotous first act scene, it’s more than the fabrics that get needled. Their talk ranges from sanitary matters (Mrs. Tarleton was recently shocked at a gathering of aristocratic women when the talk turned, shockingly in her view, to drainage systems. And Hypatia (played by Burns with a fine simmer that barely ripples the character’s finely crafted surface) skewers the men in their lives with a cool, comic detachment that will make you wish these folks were the inhabitants of Downton Abbey.

Hypatia’s aristocratic fiancé is Bentley Summerhays (Neill Robertson) — known universally as Bunny. He’s also almost universally despised by everyone as a weak crybaby with a penchant for squalling at the slightest prompt. Robertson is a marvel as the slightly built, curly-haired embodiment of a weak-bodied intellectual given to insulting nearly everyone around him. His father, Lord Summerhays (Paul Lenzi), is a dapper diplomat, recently returned from Jinghiskhan, and a snob with far more charm and polish, though he, too, disapproves of the free libraries — since “reading is a dangerous amusement.”

This intact group is moving along pretty comfortably until the 20th century suddenly inserts itself in a development that would have done Aristophanes proud: An aeroplane crashes in the yard, and the company is joined by two leather-clad fliers: Joey Percival (Benjamin Park), the pilot, and Lina Szcepanowska (Hallie Dizdarevic), a Polish daredevil with a gloriously weird family heritage.

These two serve as catalysts for an abrupt revision of the social order that’s further disrupted when another uninvited guest named Gunner (Chase Bishop, a member of the Conservatory program) arrives with his own agenda.

Shaw has provided superb stuff, and Hal Park and his team do an excellent job of representing the strength of the company that resulted from the merger of Walden Theatre and Blue Apple Players. They’ve captured the Edwardian spirit of the play with outstanding attention to detail, including sets (Clay Marshall, Elliot Cornett); lighting (Cornett, Kathy Preher Reynolds); delicious costumes (Laura Patterson); and sound (Sabrina Spalding, who does especially fine work with the roaring approach of the aeroplane).