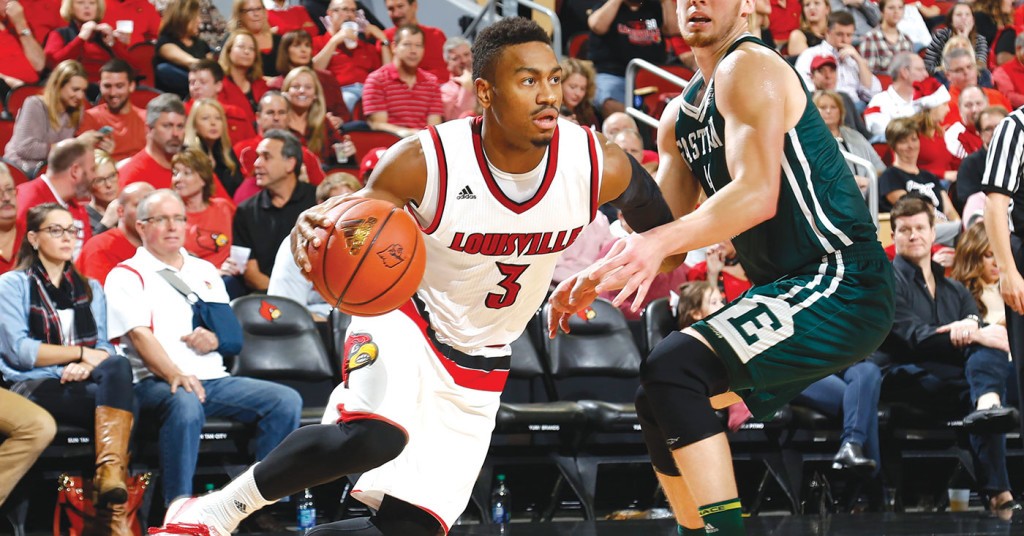 Fifth-year guard, Trey LewisPhoto courtesy of U of L Athletics

It’s that time of year — the season after the thoroughbreds of the Kentucky Derby have run their races and the nation’s eyes descend upon the Commonwealth of Kentucky once again. It is said time and time again that Kentucky is known for its fast horses and its beautiful women, but Kentucky is also known, and recognized for its basketball.

The Louisville vs. Kentucky game is one that most Kentuckians circle on their calendars as soon as the schedule is released each season. It is the day that everyone is asked to decisively choose sides, to don their Cardinal red or Wildcat blue in hopes of securing the official bragging rights for the next year. This rivalry has birthed national champions, NBA stars and some darn good basketball.

In the past five years, the winner of the Battle for the Bluegrass has gone on to become the strongest national title contender from the Commonwealth, and reflected who advances the furthest in the NCAA Tournament. In 2010, Kentucky won “the battle” and went on to play in the Final Four. In 2011, Kentucky again won and went on to be crowned the 2012 National Champion. The following year, the tables turned, as Louisville won and went on to win the 2013 National Championship. The 2013-2014 installment of the rivalry seemed like the year the trend would break, as Kentucky bested Louisville in regular season, only to find themselves the underdogs in a rematch in the Sweet 16 round of the NCAA tournament. But in excruciating fashion, they eked out a win after trailing for 39 minutes and ultimately played once again for the NCAA championship. Last year, Kentucky won once again, and made another Final Four appearance, before losing to Wisconsin — along with their hopes for a national title, and a perfect season. Ultimately, the Commonwealth of Kentucky is a basketball powerhouse — the college basketball capital — and this rivalry game has proven to be a strong measuring stick for determining each team’s potential, and how they may fare in March and April.

Finals week is officially over at both schools, and now it’s time to see who passes the test on Dec. 26 at Rupp Arena. While Louisville has won 17 of its last 35 games against AP Top 10 ranked opponents, Kentucky currently leads this rivalry series 33-15 and is on a three-game winning streak.

During the non-conference part of the season, both Louisville and Kentucky fans complain about the ease of their schedule. Thus far, Louisville has been seriously tested only once — against Michigan State — a test they did well on but did not pass. Kentucky, however, can claim a few additional tests — one against a solid Duke team — which they passed with flying colors. The others, against a solid Ohio State team and confounding UCLA squad, proved too tough for the young Cats. While at times showing the brilliance that temporarily landed them in the No. 1 spot in the nation, they have shown to be terribly inconsistent thus far. Watching them against Duke, the nation by and large was ready to crown them the 2016 National Champion. Watching them against UCLA, however, was a different story completely. Often in the early part of the season, teams play to the level of their competition and drop a game they shouldn’t. Sometimes this is a reflection of youth and lack of team chemistry, which is what seemed to happen in that game. Regardless of the fact that UCLA is now ranked, UK should not have lost the game (think of Louisville’s loss against Houston this football season). That game will sting for a while, and although the hype will constantly surround the Wildcats and their NBA lottery projections, the UCLA game will always be a question mark and the game that gives less talented opponents faith that UK can be beaten, maybe even a blueprint for doing just that.

Going into this great rivalry game, Louisville will be playing their fourth game in seven days, while Kentucky will be coming off of a six-day break. Fatigue vs. rustiness may be something to watch for, particularly in the first half. It is also notable that this will be Louisville’s second away game in an extremely hostile environment, but the pressure of this game could get to players on both sides.

While it is easy to be swayed by the media hype surrounding this game and what history may lead one to believe, let’s dig a little deeper. Examining each team’s statistics can provide insight into what type of game we can expect, as well as what each team has to do well (or prevent the other team from doing well) in order to win. Let’s look at the numbers and compare Louisville to Kentucky on paper.

Louisville leads the nation in rebounding margin per game, grabbing an average of 17.8 more rebounds than their opponents, while Kentucky ranks 21st with a margin of +9.7 (UL 7, UK 0).

The statistics that measure how well a team plays offensively and defensively lean heavily in Louisville’s favor. Looking at these statistics, one would almost wonder if the two teams should trade places in their respective AP and Coaches Poll rankings. Comparing the two teams on paper, Louisville wins a close game by a margin no larger than eight points.

Statistics show that Kentucky loses when their opponents shoot higher than 50 percent from the field, when they are out-rebounded, and when their opponents score more than 80 points. As long as Louisville is able to keep this game between the lines on the court and focus on the game plan that has gotten them this far, Louisville will win this game and begin to receive the respect they deserve (and have earned) from around the country for how good a basketball team they really are. I predict, just as Louisville claimed last month that they rule football in this state, the men’s basketball team will make a similar statement on Dec. 26. •