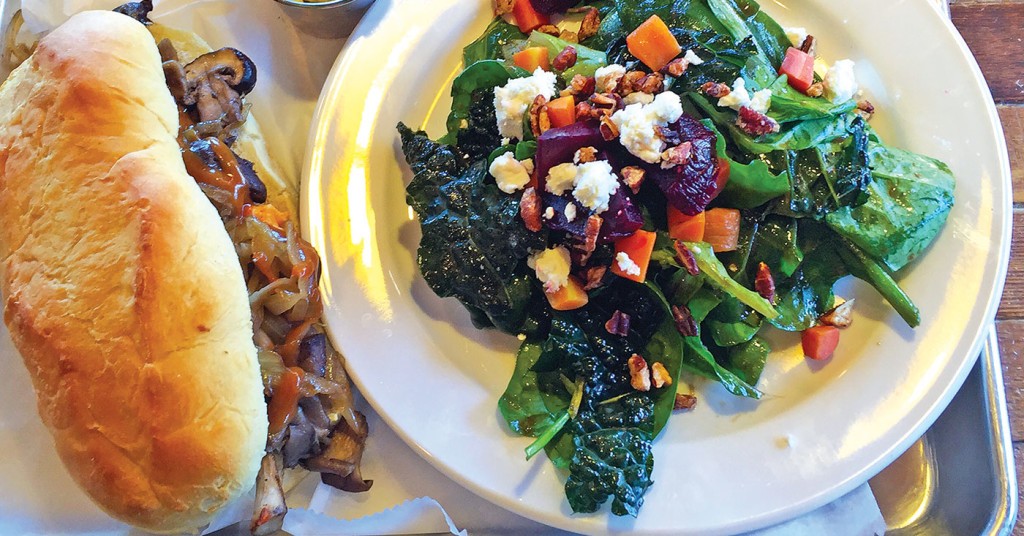 Everything about The Table seemed so cool! Its lovely adaptive reuse of a sturdy 19th century warehouse building, comfortable and cozy, making fine use of exposed brick, rough-hewn wooden tables, attractive art and bright flowers. The lunch menu that isn’t overly long, but it was full of intriguing goodies that makes thoughtful use of fresh, locally produced ingredients. And the room crowded with happy people, filling the space with laughter and smiles.

Our server was cool, too, courteous and relaxed.

But suddenly I realized that he seemed to be struggling with the mini iPad he was using to take our orders. He saw me wondering, and cracked a grin. “I don’t work here,” he said. “I just jumped up to volunteer when I saw they were getting in the weeds.”

That’s the way things work at The Table, the newest restaurant in Louisville’s old urban neighborhood just west of downtown, once a city in its own right at the other end of the Falls of the Ohio, but for the past century a sadly declining blue-collar enclave.

Suddenly Portland is starting to gentrify, and The Table both takes advantage of that trend and pushes back gently against it. It looks like gentrification with its hip menu and commitment to things natural, organic and locavore. But it contrasts with the dark side of gentrification, an economic evolution that pushes out the poor as the wealthy move in.

“Everyone has a seat at our table,” the restaurant’s non-profit management declares. It’s a “pay-what-you-can” restaurant in the tradition of Jon Bon Jovi’s Soul Kitchen in Philadelphia, or looking further back in time, Atlanta’s iconic Cafe 458, which started a similar model back in the ’80s. The Table is run by the Portland Community Development Corporation, a non-profit offshoot of Church of the Promise, a new church with its roots in the Portland United Methodist Center, which in turn started with a neighborhood street mission in the 1950s.

How does it work? Everyone is welcome to sit down at lunch, 11 a.m.–3 p.m. Mondays through Fridays; all are invited to “pay what you can.” You may pay the full menu price. You may pay the full menu price and add on — well, not a tip, but a “pay it forward” bonus toward another patron’s meal. You may pay less than the menu price, or nothing, if that’s all you can afford. And whether you pay more or less, you also may volunteer time in service to pay your own share or to “pay it forward” for a neighbor to enjoy a meal.

Our server, who we were later told is in the restaurant business, paid a little extra by jumping up to help. Just about any restaurant chore is open, volunteer director Kathie Stoess told us, from serving to prep work in the kitchen, washing dishes, cleaning up, or even, presumably with supervision, helping to cook a meal.

“We value a place where everyone is welcome, and we provide creative payment solutions for all,” The Table’s mission statement declares. Its vision is to “share love, offer hope and build community … to support local economy and invite the city to celebrate the beauty of Portland … to serve, to eliminate food insecurity, build relationships and share life with our neighbors … and to provide affordable healthy meals in a warm and welcoming atmosphere, where people dine with a purpose.”

Sounds great! But does all this love carry over to the dining experience? I’d say so. The Table’s lunch-only menu isn’t overly long, but its creativity would do justice to a Bardstown Road or Frankfort Avenue bistro. Even if you pay full price (and then some), pricing is on the cheap side of affordable, with suggested prices from $5 (for generously portioned salads) to $7 or $8 (for interesting sandwiches on artisan breads. Sides (or smaller versions of the salads) are just two bucks; soft drinks, coffee and tea are $1.

Golden potato soup ($3) was thick and hearty, topped with a crisp crouton bearing a dollop of smoky-sweet bacon jam. A half-size roasted root veggie salad ($2 for a generous half-portion) looked at first like bagged mixed lettuces but proved to be splendid, just picked baby spinach and lettuces from West Louisville’s The People’s Garden, loaded with thin-sliced roasted beet and diced carrots, topped with mild crumbled goat cheese and a sweet-tart balsamic vinaigrette.

A sandwich set up with a thick slice of country ham ($7) was a little too hefty for the tender walnut-onion bread (substituted for the all-gone pumpernickel rye), but the ham was good, and so were its slather of pumpkin butter and ration of apple kale slaw.

A veggie-style Philly “cheesesteak” ($5) substituted thin-sliced, applewood-smoked wild mushrooms and caramelized onions for the traditional sliced beef, and spicy Ale-8-One cheese sauce made a more than satisfying substitute for Cheese Whiz. On a tender, delicious hoagie bun, it was a great sandwich.

With strong, fresh iced tea, lunch for two was $21.20. We paid forward another $21.20. Next time I might sneak into the kitchen to pay a few more bucks forward.