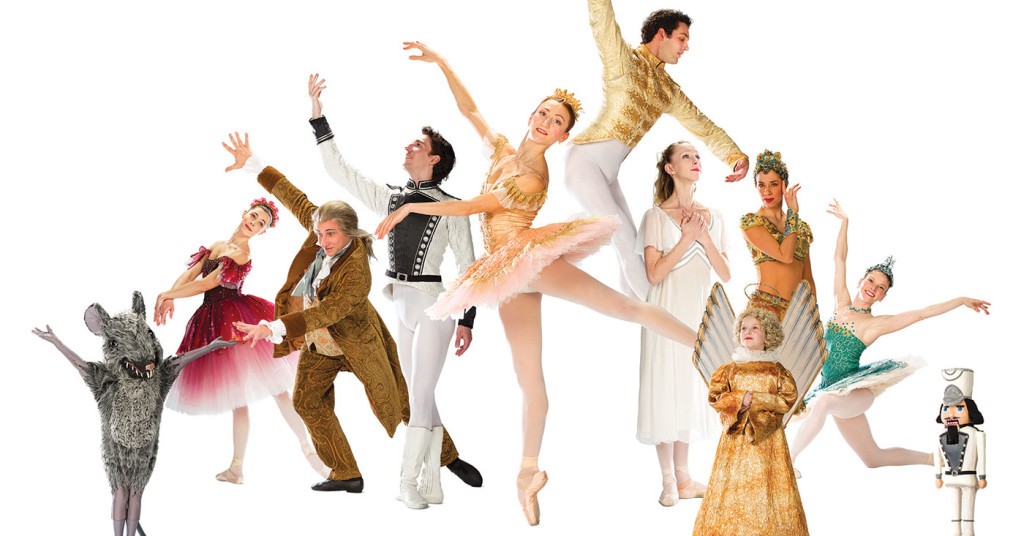 "The Brown- Forman Nutcracker" by the Louisville Ballet

You might have found fault with his figure. His body was too tall and fat for his legs, which were short and skinny. And his head was much too large for his body. “Nutcracker and the King of Mice” by E.T.A. Hoffmann (1776-1822).

The story of “The Nutcracker” has been around since 1816. Seems even longer, doesn’t it?

That’s because we have been “nutcrackered” to the point of mental exhaustion. “The Nutcracker” is the most popular ballet in America, a Christmas ritual and a great moneymaker for most ballet companies. But like all commercialized rituals, there comes a time when it’s necessary to step away from the family holiday tradition the ballet has become and learn to appreciate it again for its history and meaning.

The ballet is based on a short story by German author E.T.A. Hoffmann about a young girl whose favorite Christmas gift is a nutcracker. Carved nutcrackers became popular in the 18th century, painted by German miners to resemble politicians, soldiers and any other authority figure they wanted to have cracking their walnuts. Over time, this type of nutcracker came to represent a heroic figure.

“The Nutcracker” ballet premiered in St. Petersburg, Russia, in 1892 with the score by Pyotr Ilyich Tchaikovsky, who also did “Swan Lake,” another extremely popular ballet. The first full-length production in America was by the San Francisco Ballet in 1944.

But it is choreographer George Balanchine’s version, performed by the New York City Ballet in 1954, that really started the ball rolling (dancing it on television in 1957 and 1958 certainly helped). By the 1960s, annual performances by local companies were being danced across America. Its popularity has grown to the point it appears in other forms, such as the Nancy Drew book “The Nutcracker Ballet Mystery” and “Nutcracker on Ice.”

The mythology of the story is as important to understand as “Star Wars.” While there are variations, the basic tale has Clara’s parents hosting a Christmas Eve party with dancing, presents and puppets (she was called Marie in the book). The Nutcracker arrives at the party as a gift from her godfather Herr Drosselmeier. At midnight, Clara begins dreaming about a battle between the Nutcracker, toy soldiers and mice. The Nutcracker soon turns into a prince and leads Clara to the Land of the Sweets presided over by the Sugar Plum Fairy, a coveted part for most ballerinas.

Many ballet companies change the story slightly to reflect their locales, such as the addition of the hula in Hawaiian productions. The “Harlem Nutcracker” added African-American dancers and jazzed up the score. The Louisville Ballet has followed suit, adding references to the Kentucky Derby, jockeys and the St. James Court fountain. Our “Nutcracker” is accompanied by the Louisville Orchestra, giving a richness to Tchaikovsky’s score that only live music can give.

The University of Louisville Dance Theatre is also doing “The Nutcracker.” Its shorter version is titled “Clara’s Dream,” with a focus on the Land of the Sweets.

“’The Nutcracker’ is often the first ballet people see,” writes Jennifer Fisher in “Nutcracker Nation.” “Somewhere along the line, [it] was elevated to ritual status. For me, ‘The Nutcracker’ on a good day is like any other ritual that aspires to great heights of personal meaningfulness and communal togetherness. [It] isn’t just another aesthetic performance, although it certainly can be that. It’s also a wonderfully flexible, ritual-like, resonant phenomenon. And with rituals, repetition doesn’t equal boredom — it equals
power.” •