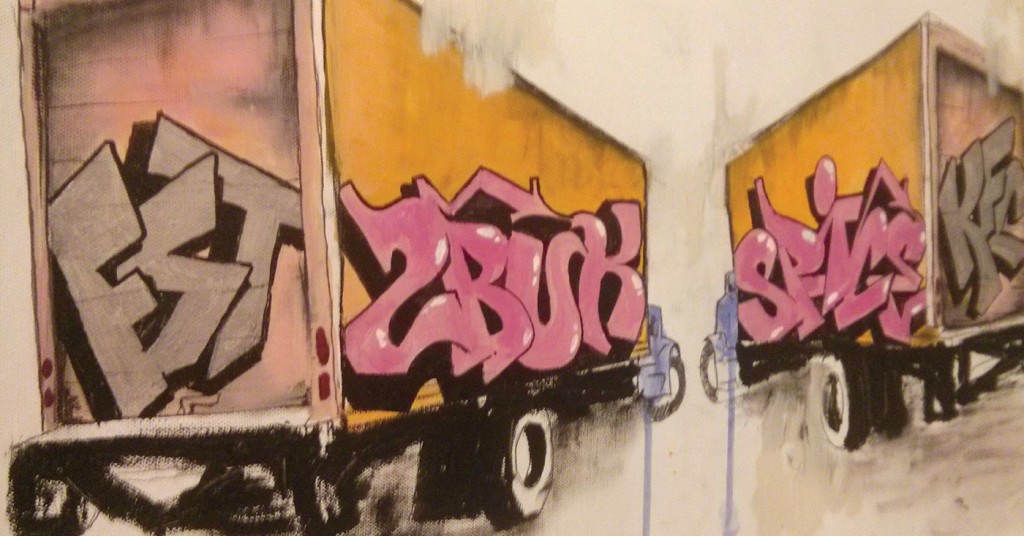 Graffiti writer Jon Brown, aka 2 Buck, died on Nov. 23 in Puerto Rico after being struck by a car. Brown was fleeing from the police after painting a mural with friends. His death sparked an outpouring of social media posts about the beloved artist’s work, and not just from Louisville.

“His influence was international,” said Ben Mcleod, owner of Identity Customs. “He was big in Detroit, New York City, pretty much all over, and for some kid out of Louisville, that’s crazy. I don’t think he even knew how big he was.”

Mcleod had worked with Brown, and the two had remained friends. So when Mcleod and Brian Gaughan, owner of Spinelli’s Pizzeria, heard that Brown’s family couldn’t afford to bring his body back to the U.S., they knew they had to do something.

“We decided to have a little memorial for him [at Spinelli’s] and an art show [at Identity],” said Gaughan. “A lot of John [Brown’s] friends are artists, and they all wanted to help out, so we got everybody to do some art for the show and all of the money, not just the proceeds, go to his family so that they can get his body back.”

The art show, which was held on Dec. 9, had contributions by well known graffiti artists such as Ewok, Cope, Coupe and Brrr, and was attended by friends and fellow artists from as far California.

“Beyond working for us, he was one of our best friends,” said Mcleod. “He affected so many people’s lives in a really positive way, and the turnout really speaks to how beloved he was. He wasn’t just a celebrity — he touched a lot of people’s lives.”

Regardless of Brown’s status as a local celebrity-artist whose work is appreciated the world over, his art is still considered illegal.

“If you look at this country and the way they treat graffiti artists right now, it’s kind of ridiculous,” said Gaughan. “And obviously I don’t want anyone writing all over my walls, so I get it. But Louisville’s a flourishing city right now, especially in the last four years, and there’s a lot of artistic talent here that I don’t think they capitalize on.”

Gaughan does his best to support the Louisville graffiti scene by hosting graffiti-centric art shows and allowing some artists to spray paint the walls of his businesses, but he said the city would be smart to do more to encourage the scene by allowing them to paint murals downtown, or by creating a free wall.

“Public walls are public walls, and it’s a shame the city doesn’t allow these artists to do more,” said Gaughan. “And when people don’t have to worry about being chased by cops, or getting hurt, they can do some great work.”

To donate money to Brown’s family, head to gofundme.com/ttbthdrk, and to enjoy some of Brown’s work check out #rip2buck.