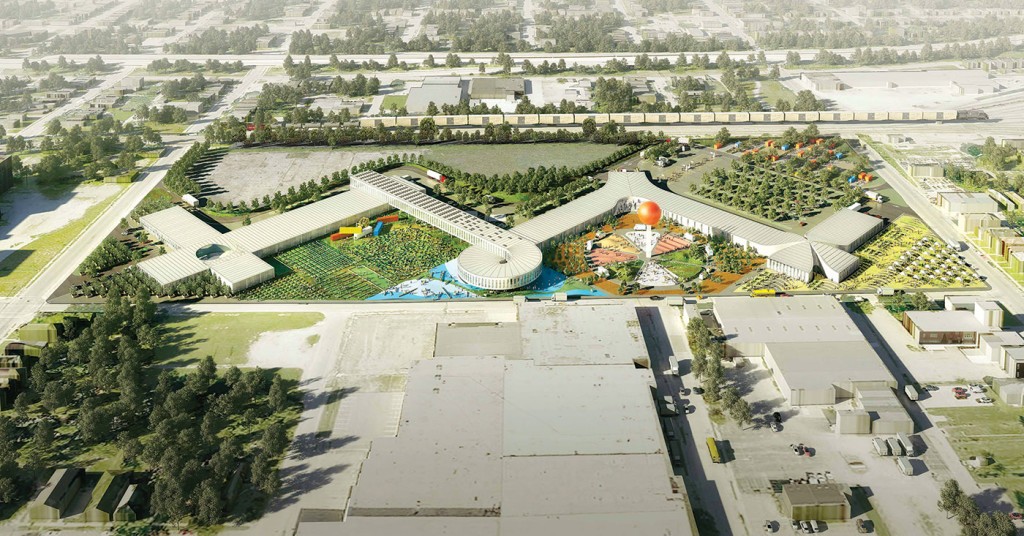 Rendering of the FoodPort by OMA

The original concept of the West Louisville FoodPort was not the dynamic infrastructure it’s planned to be now. Originally, developers described it as a food hub, like many other food hubs that already exist across the country. A traditional food hub functions as an independent entity, simply aggregating and distributing food. Unlike a hub, the FoodPort will be a business park where many businesses, farmers, entrepreneurs and regular folks will gather to do business, not against each other, but alongside each other as partners, sharing resources and relationships, increasing demand from farmers and engaging the neighborhood surrounding it.

I interviewed Caroline Heine of Seed Capital Kentucky recently. She’s the project manager for the development of the FoodPort and said it’s bound to change some lives, in part because it will be the first of its kind in the country. Jobs will become available for the chronically unemployed, underemployed and hard-to-employ neighbors beginning in 2016. Alongside larger businesses, the FoodPort will have room for entrepreneurs. Families can increase the nutrition they serve at their dinner tables. Would-be urban farmers can learn how to start a garden. Maybe one day no one will remember what the site looked like as a cold and ghostly relic of big tobacco.

Because the dynamic concept of the FoodPort is so new, with big promises directed at the heart of Louisville’s most neglected population, some urban residents are wary of the FoodPort, as are some rural farmers who are equally distrustful of new methods. But, satisfying West Louisville’s chronic need for food accessibility requires this risk. Within the nine neighborhoods that make up the city’s food desert, some 60,000 of our neighbors are living with little to no regular access to fresh foods.

Louisville has one food hub already. New Root’s Fresh Stops are registered with the USDA as a non-profit food hub. While New Roots does much good with its Fresh Stop locations, food is available only bi-weekly between May and December. Unfortunately, sporadic in-season availability can’t offer enough food security to make the bigger food changes people need in their daily lives.

For all of us, local food is still harder to access than food trucked in from across the globe. But, in food deserts, fresh food is scarce. Fast food, and whatever one finds at the corner store make up a food desert’s only regular bounty.

A modern, fully functional local food system where all people have daily access to fresh, local foods doesn’t exist yet, which is what makes the development of the FoodPort so critical to the future of our city. For people who need food the most, transportation, poor health and employment during the slim hours of a Saturday farmers market can be barriers between people and healthful food. Fixing our food system requires a new remedy, not just another farmers market, but something that hasn’t been done before.

Creating the FoodPort is a bold move — its very concept challenges the status quo of our entire food system, eaters and farmers included. The day it opens its doors could be the tipping point that changes the future and the culture of how Louisville eats, how healthfully we live, and it could model a progressive food system for other big cities across the country. Its very nature ensures some people won’t like it.

FoodPort developers and community board members are working from a core set of values it created to help guide the complicated process of creating its new system of food accessibility: transparency, honesty, inclusiveness, collaboration and sustainability. This doesn’t mean that mistakes aren’t inevitable. Big ones and small ones, and others the community doesn’t like will probably continue to some degree.

Was the anaerobic digester (methane plant) portion of the project a mistake? It was a fantastic sustainability strategy for diverting useful food waste, but it was scrapped after residents refused to accept a methane plant in their neighborhood. That was a victory for neighbors who have joined the discussion and who have helped to create the version of the FoodPort they want to see in West Louisville. Yet disapproval of one aspect should not be considered disapproval for the whole project.

If not for its projected success and developers’ fierce desire to improve food availability, the project would be pointless. Seed Capital Kentucky is building the figurative bridge, a community place, where neighbors and growers and processors and foods will all come — it’s a concept that has always been missing from our conversations about local food solutions. •

Rachel Hurd Anger is an urban farming writer in Louisville. Her work has appeared in many publications including her weekly advice column for urban chicken keepers at UrbanFarmOnline.com/ChickenQuarters.