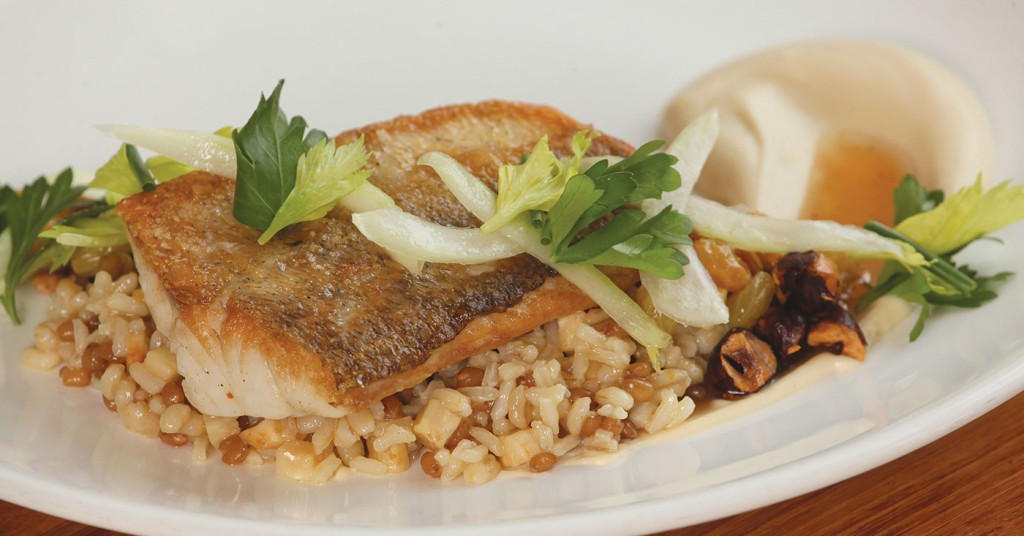 I’m looking at you, Decca! Chef Annie Pettry’s new landmark in NuLu has been a favorite since it landed before Derby 2012. NuLu was just beginning to erupt as one of the city’s most hip dining districts when Pettry arrived from San Francisco to open Decca’s doors.

I loved Decca from the start. It’s a magical place that captures all that’s best about the NuLu renaissance: creative, chef-driven fare focused on locally sourced, quality meats and produce, with, thanks to Pettry’s West Coast roots, a hint of the Pacific Rim; well chosen adult beverages, and a sophisticated feel. I’d eat there monthly if I could. Maybe more often.

So, I put on a happy smile the other night when, thinking about where to go this week, I realized that I hadn’t been back for a review since soon after it opened. Good choice. It was just as good as I remembered.

Is it perfect? Well, it’s loud, and that’s a problem for some, but many hot new places are. And it was dim: dark enough that it wasn’t easy to make out the menu. Happily, we only had to ask to get the lights turned up a bit, without making the room bright enough to harsh everyone else’s mellow.

Decca, you’ll recall, occupies a beautifully renovated 1870s brick building in the heart of NuLu. Originally a commercial building, for many years it housed a homeless population under the guidance of the caring folks at Wayside Christian Mission, which moved to two locations closer to downtown when the NuLu gentrifiers moved in.

The building isn’t overly large, but it offers a variety of settings: the bar where we were seated, with its long banquette; more dining rooms upstairs; a cozy dark space for relaxing with music downstairs; and, in season, an upstairs balcony that looks a lot like New Orleans, and one of the city’s most beautiful — and strictly non-smoking — al fresco spaces.

The menu wisely follows the “keep it simple” principle: six starters, three smaller-plate “middles,” four wood-grilled “table” side plates and just five mains, not counting daily specials. This allows the kitchen to master a good array of dishes without trying to take on an unrealistic Rube Goldberg smorgasbord.

The mains can get a little spendy, ranging from $27 (for a wood-grilled chicken breast) up to $35 (for braised beef short ribs); but a thrifty diner could compromise, losing only some calories, with a starter ($13 to $16), a middle ($16-$17) and perhaps a side ($7). Don’t overlook Decca’s top-rank drinks program, either, with well-chosen wines, beers, liquors and cocktails.

The bibb lettuce salad ($12) was simple but fine, dressed with shaved radishes and earthy Tuscan pecorino cheese in a tart red-wine vinaigrette. Another appetizer was a winner: a lovely octopus a la plancha ($14) was beautifully prepared; thick rounds of tasty tentacle were tender and not at all chewy, served on a spicy, not fiery, North African-style harissa sauce and accented with intense green olives and crispy, garlicky potatoes.

A “middle” of mushroom risotto ($15) made a not-so-small plate of umami-rich, rather soupy rice that I suspect wasn’t made by the traditional risotto method (and I didn’t care, because delicious). It was topped with thin rounds of meaty white mushroom. shreds of crispy black mushroom, finished with Parmigiano and thin grated curls of what I took (from the menu) to be cured egg yolk.

A main-course slab of pan-seared walleye ($29) was firm, white and flaky, flavorful and mild. It was plated on a swirl of al dente mixed grains, mostly barley; chunks of celery root and a dab of baby lettuces in a brown-butter vinaigrette.

Table sides of wood-grilled small carrots ($7) and intense, juicy little red beets were both fine.
A scoop of chocolate-chip cherry ice cream, graciously separated from a fancier dessert and served on its own ($3) was truly outstanding. A spiffed-up “ice cream sandwich” ($9) failed to win my affection: the malted-milk gelato and bourbon caramel were fine, but it was encased in an almond and cocoa-nib nougatine, a confection that’s simply too dense and chewy to work make a sandwich.

We kicked our tab up a bit by enjoying adult beverages with our friends over the course of a relaxed, leisurely evening, including Boulevardier ($10) and an offbeat, spicy Chupacabra ($7) cocktails, a glass of a modest but pleasant white Burgundy, Bouzeron Aligote ($8), and a bracing after-dinner sip of powerfully licorice-y Absinthe from Louisville’s Copper & Kings ($12).

Bolstered by the booze, dinner for two cha-chinged up to a hefty $131, plus a $30 tip for four-star team service. It was worth it.