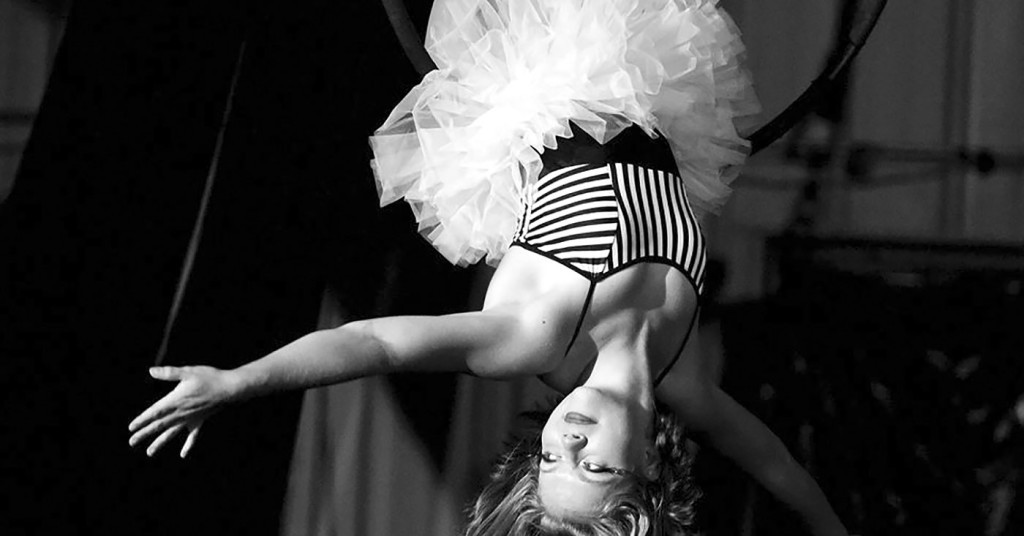 Louisville’s circus scene is taking off. From the street level action of clowns, geeks and fire spinners to the high flying aerialist of the lyra, the silks and the Spanish web, the local crowd of enthusiastic volunteers and a growing number of professionals are keeping the big top alive in Louisville.

CirqueLouis, one of the latest groups to form, is having their first public show this Sunday at the Mercury Ballroom. “CirqueLouis: Bootlegged Untapped” is set in the roaring ’20s amid bootleggers and speakeasies. The evening features aerialists, jugglers,  stilt walkers, unicyclists and a variety of fire acts. Artistic Director and co-founder Christine Moondance laughed as she listed the fire entertainment, including flare bartending, fire eating, fire dancing and fire spinning: “We got our fire permit, and we’re using it,” she said.

Like many members of Louisville’s growing scene, CirqueLouis grew out of the circus community at Turners. It was there that Moondancer met co-founders Lynley Elliot and Abbie Springer.

Elliot is a lifelong circus performer. She met Springer in college, and the two worked together as cheerleaders, winning national championships in 1998 and 1999. “We’ve been playing ever since,” said Springer, who added, “She means a lot to me as a friend and a teacher.” The duo took a break from performance to start families, but then immersed themselves in the circus community at Turners.

Moondancer joined Turners first as a parent. “I was just a mom, and just in awe, and inspired by everything I saw. The next year I started volunteering, and doing costuming.”

Moondancer eventually took on a larger role and became the creative director of Turners’ circus productions. Turners had been presenting showcases in a traditional way, with a ringmaster introducing acts. “I would see act after act after act that related to a theme but I didn’t see a story,” said Moondancer. “It started going in my head all the time how to create a story out of the whole thing.”

As Moondancer took on a larger role at Turners, she and the other CirqueLouis co-founders began having conversations about forming their own circus organization.

After last spring’s showcase, Moondancer announced that she would be stepping back from her role at Turners. “A couple days later, Abbie approached me and said, ‘Let’s do this, let’s all do this,’” said Moondancer. That was April. By May, they had formed a nonprofit.

While CirqueLouis is its own entity, separate from Turners, there are no hard feelings. In fact, CirqueLouis rents classroom space from them, in exchange for some continued support on Turners’ upcoming showcase in April.

The formation of CirqueLouis came from an instinct to take it to the next level. “Some of our aerialists at Turners had reached the point where we weren’t offering classes at a high enough level,” said Moondancer. “We’re able to do more intensive classes. We’re also bringing in things that Turners has never had classes in: unicycle, juggling, stilt walking.”

CirqueLouis is also focusing on a specific type of performance, what Moondancer calls “contemporary circus theater.” She explains,  “I’ve always been in love with opera, the ballet and theater, so I really wanted to draw all the elements into the circus instead of it being, ‘Here’s an act, taa-daa! Here’s an act, taa-daa!’”

In addition to an a story-based approached to circus, Sunday’s entertainment will continue after the last circus act is done, with members of Louisville Swing getting the dance floor warned up, and Billy Goat Strut providing music. Did I mention the flare bartenders? Fire and booze, so it should be a great show and an awesome party.